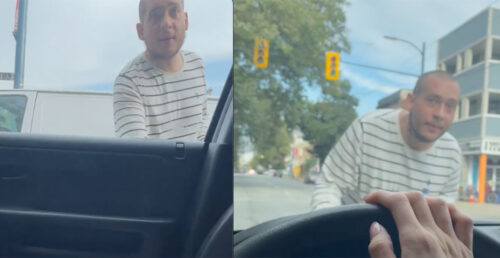 A Vancouver woman shared a frightening incident last week where a man tried to open her car door while she was driving.

The 26-year-old woman was stopped at a red light on Powell Street near Oppenheimer Park when the man came up and tried her door.

“Just checking if your door’s unlocked. No they’re not,” the man says, before doing the same to a truck stopped beside the woman.

The man began walking away but turned around to talk to the woman through her windshield — blocking her from proceeding when the light turned green.

“Can I move? You gotta get out of the way… I gotta go to work,” the woman says in a video shared to Instagram.

He repeats “it’s okay” several times until someone on the sidewalk offers him a cigarette. At that point, he walks away.

The woman uploaded the video on August 23, with a message for others to remain vigilant.

“This is why we need to lock our doors,” she said. “I’m not posting to shame this person, but as a reminder that we don’t know what state the people who cross our path will be in.”

She also thanked the woman across the street who distracted the man and allowed her to leave.

The video was shared widely online, and other users commented that the woman handled the situation well — by remaining calm and not escalating it further. Some commenters, however, suggested they wouldn’t have kept their foot on the brake and instead would have pushed the man.

Daily Hive has reached out to the woman driving, the woman who distracted the man, and Vancouver police for comment.