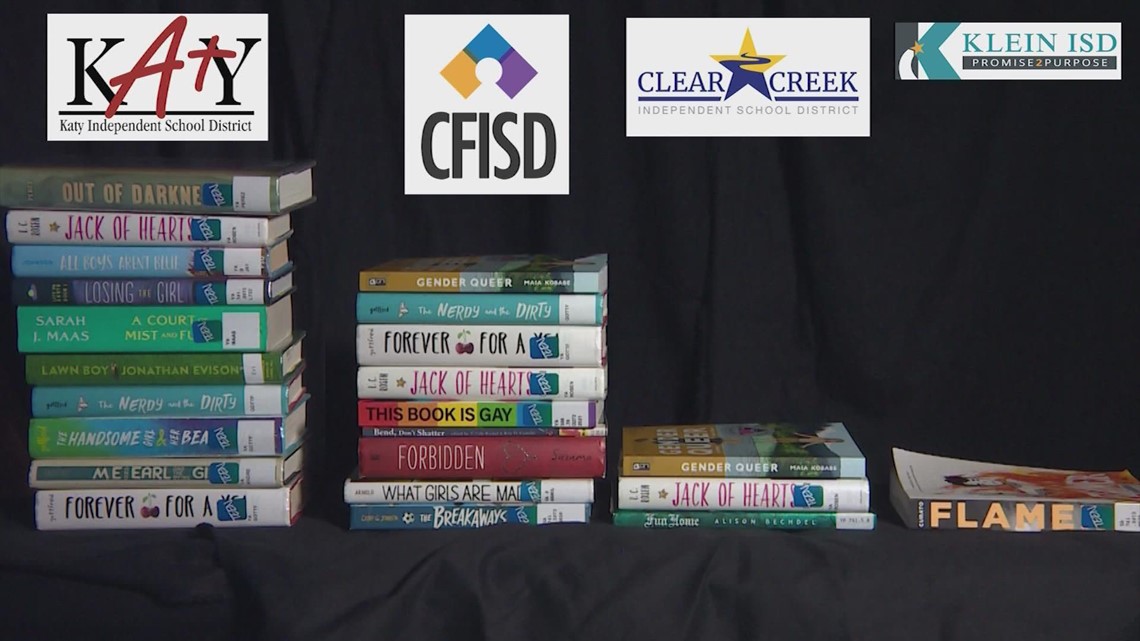 HOUSTON — Nationwide, bans and challenges to books in school libraries and classrooms are on the rise. The American Library Association tracked challenges to 1,597 books in 2021. That’s almost four times higher than in previous years.

At the 10 largest districts in Greater Houston, dozens of books were reviewed this school year, a KHOU 11 News investigation uncovered. But only a few districts banned books. Which titles were banned depended on the district: Books that remained on the shelves in some were removed in others.

Three Katy ISD students participated in the public comment portion of the school board meeting on Monday, May 16 to plead with members to bring back the books.

“I shouldn’t have to continue this fight for six months to see an overwhelming number of book challenges,” Seven Lakes High School senior Cameron Samuels said.

“We can advocate for change, but our voices will not truly carry equal weight until we have a tangible and transparent process to create positive results,” Jordan High School junior Alison Franks said.

Here’s a map showing which districts banned which books:

This school year, Katy ISD removed 10 books it deems “pervasively vulgar” from its school libraries and classrooms, more than any other district. Students, such as Jordan High School sophomore Zahra Bakrin, said it puts some students at a disadvantage.

“School libraries are one of the primary sources for literature for a lot of students that don’t have access to public libraries due to distance, or just availability in general for kids who don’t always have enough funds to be able to purchase books for themselves to keep,” Bakrin said.

Samuels and Franks hoped to effect change by helping students gain access to titles that were in jeopardy of being removed.

“A lot of them were actually books I had read that really shaped me or had an impact on me, whether I agree with them or not. I felt, like… what’s going to happen if we ban these books? And then it spirals,” Franks said.

In February, as part of an event called “Freadom Week,” Franks, Samuels, and other Katy ISD students distributed hundreds of copies of books under review by the school district.

“I felt empowered to see that students were leading these efforts to ensure that all students could have the resources they need to support themselves,” Samuels said.

Which books were reviewed?

KHOU 11 Investigates the 10 largest school districts in Greater Houston for a list of books they reviewed. We found 81 challenges to 62 books this school year.

The books ranged from LGBTQ novels questioned for sexual content – ​​”Gender Queer,” “Lawn Boy,” “All boys Aren’t Blue,” “Flamer” and “This Book is Gay” — and books parents claim to promote critical race theory — “The Breakaways,” “New Kid” and “Out of Darkness” — to the Bible and a biography of Donald Trump.

“This is a culture water against LGBTQ BIPOC students. Students are not political pawns. But parents and certain people in the community are treating us as such,” Samuels said.

Of the 81 book challenges, 42% had no changes, 27% were restricted to older grades and almost a third ended in the removal of 18 titles. But only four of the 10 districts removed books.

Which books were banned?

But for the remaining titles, the books that were removed were inconsistent across districts.

Five of Katy ISD’s banned books — “Lawn Boy,” “Me and Earl and the Dying Girl,” “The Handsome Girl and her Beautiful Boy,” “All Boys Aren’t Blue” and “Out of Darkness” — were reviewed by other districts but allowed to remain in school libraries.

RELATED: ‘We’re not going to stand for it’ | Clear Creek ISD parents bring up book content concerns at board meeting

One of those titles, “Out of Darkness,” was reviewed by four districts and three — Cy-Fair, Clear Creek and Conroe ISDs decided to keep the book in high school libraries. Katy ISD was the only one that removed the book entirely.

Cy-Fair and Klein also banned one book each that was kept in other districts. Cy-Fair banned “The Breakaways” while Katy and Clear Creek ISDs decided to keep the book and restrict it to middle school students and older. And Klein banned “Flamer,” while Cy-Fair, Katy and Clear Creek all kept the book on high school shelves.

Parents in favor of banning books

Mary Ellen Cuzela, mother of three Katy ISD students, said she read four of the five books Katy ISD banned. She has spoken to the school board in favor of restricting the books.

Cuzela added her position on books has nothing to do with LGBTQ culture.

But the students we spoke to say the books simply reflect their realities.

“I understand where these parents are coming from, but at the same time, these books aren’t pornography. They’re not, like, erotica, or anything like that. It’s just a story,” Bakrin said.

And removing books with LGBTQ themes “sends a clear message that they (LGBTQ students) are not supported by an educational institution that is meant to support them first,” Samuels said.

As for the districts that did not ban books, three of them — Houston, Aldine and Pasadena ISDs — said they didn’t get any complaints or review books this year.

Fort Bend, Humble and Conroe ISDs said they received complaints, and some are currently under review, but they have not removed any books this school year.