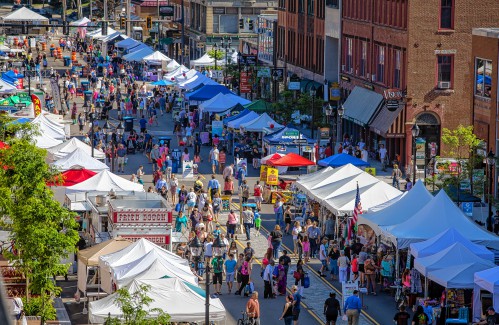 As Market Days returns to its regular June timing for the first time since the pandemic began, the annual downtown festival will focus on bringing music to all Concord residents – and appreciating the performers that make that art accessible.

This June, Intown Concord is partnering with the Capitol Center for the Arts to bring a big act to the three-day free festival. The alternative rock band Vertical Horizon, best known for their 2000 Billboard hit “Everything You Want,” will be headlining on June 25, becoming the first nationally touring artist to perform at Market Days.

Sal Prizio took over as executive director for the Capitol Center for the Arts in December, moving to New Hampshire to take on the job. Prizio wanted to bring a significant concert to Concord for free, and decided it made sense to partner with another organization already hosting one of the city’s most anticipated summer events.

“One of the things I love to do is break down the walls of what presenting to a community means,” Prizio said. Those walls can be physical, ideological or financial, but overall Prizio wants the Capitol Center for the Arts to step outside its typical spaces and bring art to everyone in the capital city. Going forward, he also plans to work closely with Concord’s Multicultural Festival and present more events in the Heights.

This June’s Market Days, which will be Prizio’s first, will serve as a chance to demonstrate to Concord and potential partners that the Capitol Center for the Arts can pull off hosting a big public performance for free.

Prizio hopes that Vertical Horizon will delight the Millennial and Gen X parents who came of age when the band was churning out angsty hits, while satisfying their kids with a fun, family-friendly show. The main stage on Main Street will be upgraded for the task, benefiting the local and regional artists playing during the rest of the weekend.

Intown Concord Executive Director Jessica Martin said that between the main stage and stages in Eagle Square and Bicentennial Square, Concord will enjoy 30 hours of free entertainment over the three days of the festival.

Although Vertical Horizon will be paid to perform, other artists volunteer their time to bring music to Market Days. Martin said that Intown Concord will facilitate ways for attendees to donate to the artists on a voluntary basis, either by prominently featuring artists’ donation pages or setting up band merchandise tables.

“We’re just trying to encourage community members to appreciate these performers and the time that they take out of their schedules to travel, to practice and perform for us,” Martin said. “It’s free entertainment for the community, but it’s not free.”

The ultimate goal is to pay artists for their time at future Market Days, Martin said. Although this new push to compensate artists isn’t explicitly a response to the pandemic, the litany of events canceled by COVID-19 sparked reflection about the power of live music.

“I think we all just started to realize the true value of performing arts and we want to create more equity within the community among artists,” Martin said.

In 2020, the full street festival was canceled. Instead, Intown Concord held events spread out throughout the month of June.

Vendors tend to prefer the June scheduling, Martin said, because the weather is milder. Early summer dates also tend to attract bigger crowds, before summer travel and vacations take people out of the city.

Last year’s Market Days was Martin’s first festival as leader of Intown Concord. She said it went well, and she learned that there’s no such thing as too much communication between vendors, city officials and all the others involved with pulling off the festival.

Elyssa Alfieri, owner of downtown vintage consignment shop Lilise Designer Resale, has had a booth at Market Days nearly every year since she bought her store six years ago. Alfieri took a year off in June 2019, when she was eight months pregnant. The festival functions as a long-term marketing strategy for her business de ella, bringing in customers in December who still remember her logo de ella from the summer.

The past few years have been a rollercoaster for her life and her business. The same year she had her baby de ella, a burst water main flooded Lilise and forced Alfieri to relocate the store from Storrs Street to Main Street. Months later, the pandemic began. “I went baby, flood, plague and I went ‘I’ve had enough,’” she said.

Alfieri got creative, modeling clothes on Instagram and keeping in touch with her customers remotely, but COVID made it impossible to make accurate sales predictions. “The shutdown was probably the hardest part, not being able to go to a job that I loved every day,” she said.

She is glad Market Days is returning to the temperate days of early summer, kick-starting the season. Most of all, she looks forward to seeing familiar faces at Market Days each year.

“It’s like those little magic moments that are just so, so much fun,” Alfieri said. “This is our way of celebrating our little patch of land here in our neighborhood.”