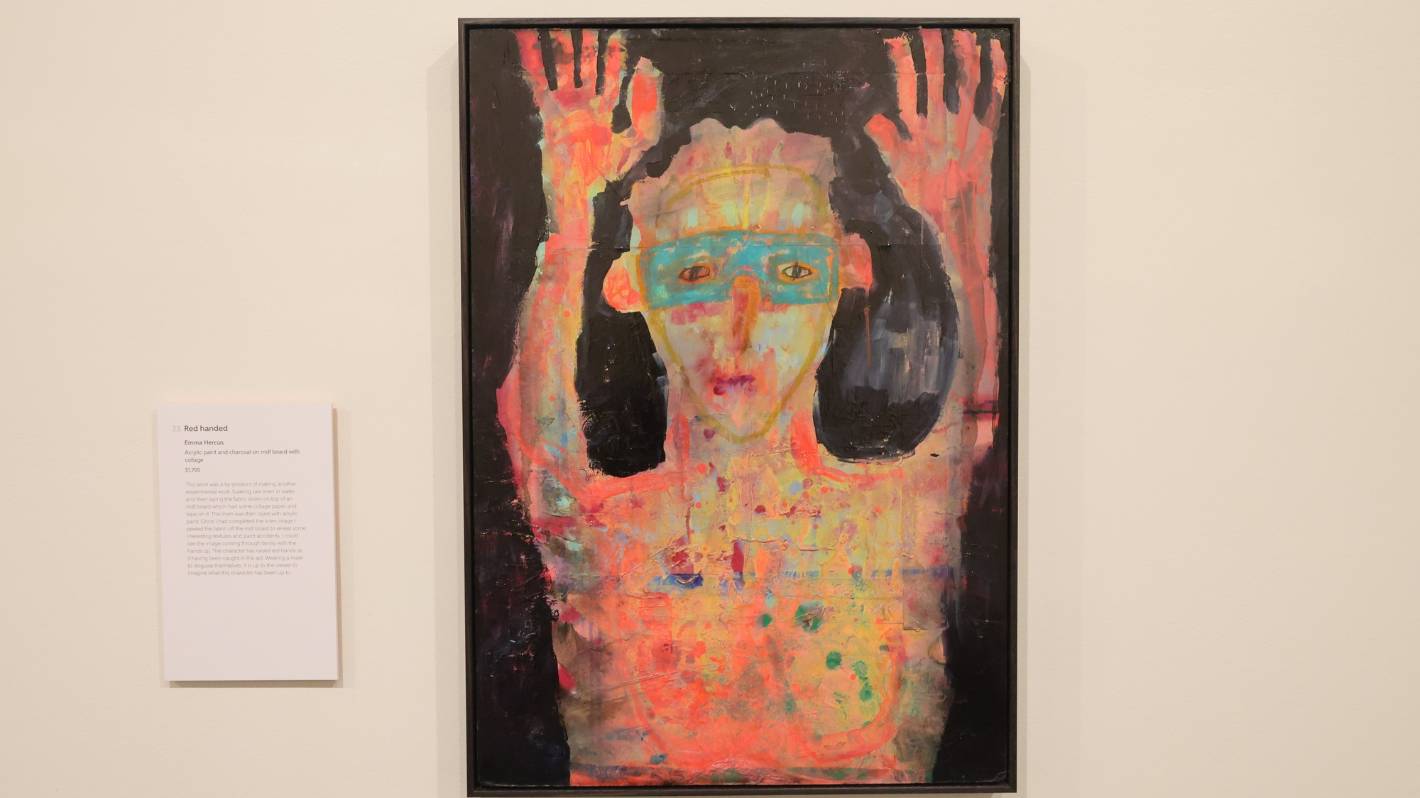 The winning work was selected by Reuben Paterson, one of the country’s top contemporary artists, and judge for the 2022 National Contemporary Art Award at Hamilton’s Waikato Museum Te Whare Taonga O Waikato.

Speaking before the unveiling on Friday night, Paterson said it was the evolving story of “struggle and then triumphant” in Hercus’ piece that kept him “mesmerised”.

In his process of selecting the final pieces out of the 300 entries, Paterson said he knew he wanted something that took the viewer on a journey and had “heart”.

“I’ll admit it was harder than I thought because so many works encapsulated that… but in the end I kept coming back to Emma’s piece,” Paterson said.

The multimedia piece, made from acrylic paint and charcoal on MDF board with collage, remined Paterson of the Shroud of Turin.

The Shroud of Turin is a length of linen believed by some to be the burial garment of Jesus Christ that has been preserved since 1578 in the royal chapel of the cathedral of San Giovanni Battista in Turin, Italy.

“Placed face down, the linen absorbs an image, like the Shroud of Turin.

“In placing the linen downwards, it collects the exploits and remnants of surroundings, or of the night before, collecting hairs and souvenirs of tape and collage that make reference to bodies violently surrendering to arrest and control.

“What the artist reveals as this figure is peeled back from the MDF board is a figure rising up, where the violent scars and pitted surfaces are celebrated in confetti colours, and darkness is now set into the past, as a painted black background.

“These hands are no longer at surrender, but raise in triumphant celebration, masked as a hero, not a villain, from an uprising.”

The work was chosen through a blind-judging process from 34 finalists, all of which are now on display at the museum until November 28.

Celebrating its 22nd birthday this year following a cancellation in 2020 due to the Covid-19 pandemic outbreak, the award attracted entries from around New Zealand and overseas.

Tompkins Wake, one of New Zealand’s leading law firms, and nationally-renowned architects Chow:Hill have been sponsors of the top prize since 2014 and 2015 respectively.

The runner-up and winner of the $5,000 Hugo Charitable Trust Award was Raukura Turei for He Tukuna V for onepū, oil and pigment on linen.

There were also two $1000 merit awards given to Sara (Hera) for her photograph Tautuku Orme for Ko Te Awa Ko Au -Darling (Darz) and Oleg Polounine for Dits and Dahs an aluminum foil sculpture.

The Campbell Smith Memorial People’s Choice Award, worth $250, is sponsored by the Smith family as a tribute to the former Waikato Museum Director, artist, playwright and poet.

It will be presented to the winner of the most votes by the visiting public just before the Award exhibition closes in November.