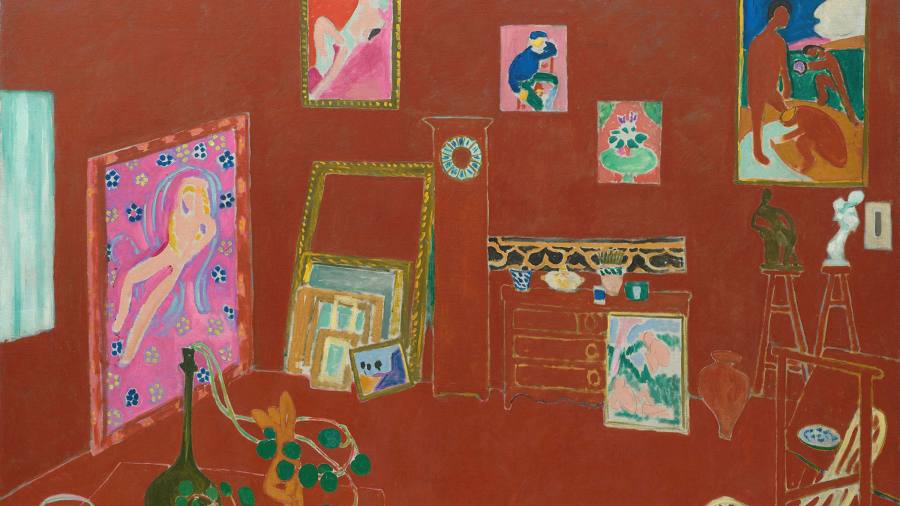 More than a century has passed since Henri Matisse created “The Red Studio”, a painting of a roomful of paintings, and I have seen it innumerable times at MoMA. Yet it hasn’t relinquished the ability to rattle and exhilarate. Its radicalism endures. This is where Matisse found the ideal marriage between broad blocks of color and jittery patterns, between spaciousness and paper-thin surface.

Modern art turned a corner on the day he signed that opus, and so did Matisse himself. MoMA has built an enchanting little show around that single masterpiece, reuniting “The Red Studio” with 10 of the 11 paintings and sculptures by Matisse it depicts. That first gallery details how Matisse treated his sanctum as a kind of self-portrait, each object standing in for some chunk of his past, taste, or aspirations of him. A second section traces the work’s path after it left Matisse’s hands, spending decades in the wilderness before settling down as one of the museum’s most August treasures.

In 1911, the Russian textile magnate and Matisse’s loyal patron, Sergei Shchukin, invited him to adorn a small chamber in his Moscow palace. The first installation was a picture of the artist’s studio in Issy-les-Moulineaux, seductively tricked out in shades of pink. The floor is a rich salmon; the walls have a mauve cast, dotted with flecks of green and gold. Matisse took some liberties with verisimilitude — the actual walls were white — but kept the composition grounded in physical reality. A yellow carpet recedes diagonally into the interior of the scene, tables mark out the middle ground and vertical wooden panels delineate the back wall, where a window opens on to a garden beyond.

Later that year, he followed up with “The Red Studio”, and this time he dispensed with illusionistic space altogether. We can no longer tell ceiling from wall or back from front. All is suspended in a single plane, awash in a sea of ​​Venetian red. The eye wanders, alighting here and there on floating canvases. Ivy snakes out of a dark green vase that ostensibly sits on a tabletop but also appears to levitate.

Matisse was interested in color without mass, luminescence without gravity. In 1912, he wrote to Shchukin that he had produced a study in “blues, pinks, yellows and other greens representing the paintings and other objects placed in my studio”. To make his point about him more clearly, he accompanied that note with a small watercolor study. Shchukin promptly rejected it.

He was not alone. Nobody had yet imagined a scene so untethered to the visible world. And yet it was not so much its technique or abstraction that viewers found unsettling as its aura of deceptive simplicity. A critic who saw “The Red Studio” at the 1913 Armory Show in New York reported that Matisse “throws figures and furniture on his canvas with precisely the prodigal impartiality and the reckless drawing of a child.” A less censorious way of putting that might be that he yearns for the child’s ability to slip between reality and imagination, or that he merges whimsy, pleasure, wistfulness and elation. Instead of windows on to nature, we get pictures that open on to views of the mind.

The MoMA show allows us to walk inside that fervent brain, to see Matisse’s works as he did, all together and at full scale. Gathering the six paintings, three sculptures and a ceramic plate was a Herculean feat of detection by two curatorial teams, led by Ann Temkin at MoMA and Dorthe Aagesen at SMK, the National Gallery of Denmark. (They even tracked down a tiny headless terracotta figure that had been stashed among the possessions of Matisse’s son Jean.)

The resulting mini-retrospective-within-a-show traces Matisse’s growth and desires as they manifested in 1911. “Corsica, the Old Mill” (1898) evokes the mood of his honeymoon in Ajaccio, that first close encounter with the Mediterranean sun and the revelation of the glowing sea. His astonishing gift for color asserts itself in puddles of rose, purple, and aquamarine. Stone walls vaporize in feathery strokes.

Seven years later, he produced his Arcadian vision “Bonheur de vivre”, in which landscape overlaps with sex. Though the work itself is absent, its idyllic language permeates the gallery. In “Le luxe (II)” (1907), three nudes disport themselves on the shore of blue-green waters, with breast-like hills beyond. Bodies are opaque flesh-coloured shapes; the sun-beaten Eden beyond is even more spare. Light comes from nowhere and blankets everything. Time is suspended.

That pensive joy expresses an ambition he had yet to realise: painting as a kind of sublime therapy. “What I dream of,” he declared, “is an art of balance, of purity and serenity, devoid of troubling or depressing subject-matter, an art which could be for every mental worker, for the businessman as well as the man of letters, for example, a soothing, calming influence on the mind, something like a good armchair which provides relaxation from physical fatigue.”

In the years after “The Red Studio”, that craving led him towards even greater extremes of flatness and abstraction. The exhibition includes “Nasturtiums with the Painting ‘Dance’ (I)” (1912), in which a table and vase of flowers straddle the two- and three-dimensional worlds. One leg of a table reaches into the scene that leans against the wall, the other two sit on the tipped-up floor. Space and representation have fused.

And what about the artist’s urge to soothe the breasts of tired writers and financiers? He eventually got that wish too. As part two of the show narrates, “The Red Studio” languished out of sight for 15 years, and then a nightclub owner bought it for the Gargoyle Club in London. There, an elite list of plutocrats and bohemians sought solace in each other’s company, in plentiful booze, merry music and in Matisse’s blaring hues, infinitely reflected in the ballroom’s mirrored walls. Eventually, the fun wound down and the work found its way to MoMA.

Near the end of his life, Matisse returned to his old preoccupations. In his last completed oil, “Large Red Interior” (1948), paintings, flowers, furniture, and pets are all pressed against the same vermilion plane, as if to reiterate that the true world he inhabited was not a place of depth and shadows but a bright scroll of proffered delights.