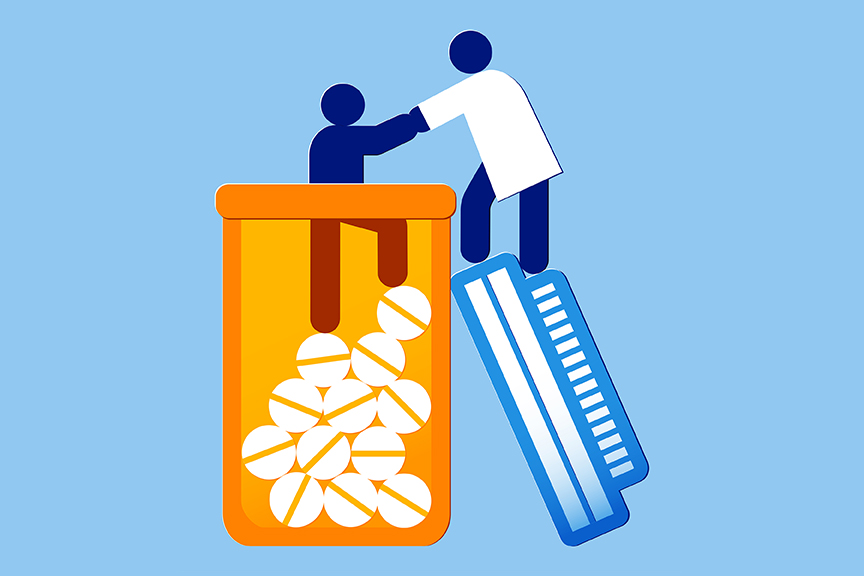 Less than half of Americans who received treatment for opioid use disorder over a five-year period were offered a potentially lifesaving medication, researchers at Washington University School of Medicine in St. Louis and Saint Louis University have found. And treatment with the medication was even more rare for those with what’s known as polysubstance use disorder — when opioid users also misuse other substances, such as alcohol, methamphetamine, benzodiazepines or cocaine.

The findings build on the knowledge that medications to treat those who use opioids are generally underutilized.

“This is equivalent to giving those with advanced cancer a less aggressive treatment,” said senior investigator Laura J. Bierut, MD, the Alumni Endowed Professor of Psychiatry at Washington University. “It seems obvious to many of us that we should be giving the most aggressive and effective treatments to those who are most seriously ill.”

The potentially lifesaving drug, buprenorphine, has been shown to reduce overdose risk — yet an analysis of health insurance data involving about 180,000 people treated for opioid use disorder showed that nearly 53% of the patients with the disorder alone were not prescribed the medication. Among those with polysubstance use disorder, the number prescribed buprenorphine dropped to about 30%.

The study is published May 10 in the journal JAMA Network Open.

“It’s concerning that the majority of people misusing multiple substances don’t appear to be getting the lifesaving medication they really need,” said first author Kevin Xu, MD, a resident physician in the Department of Psychiatry at Washington University. “Even among those who used opioids exclusively, buprenorphine was prescribed only about half the time. While the data we analyzed predates COVID-19, the pandemic saw an escalation in overdoses, yet we’re still not seeing many eligible patients get buprenorphine prescriptions.”

Xu and his colleagues — including Bierut and Richard A. Grucza, PhD, a professor in the Department of Family and Community Medicine at Saint Louis University — analyzed data compiled from 2011-2016 by insurance companies for the US IBM MarketScan databases. The databases include detailed information about patients treated for opioid use disorder, as well as those treated for using opioids together with other drugs.

“The data we analyzed are a few years old,” Bierut said. “But we think this information can be extrapolated to what’s happening now because even more people using opioids — or using opioids as well as other substances — are showing up in emergency departments today. The problem has only gotten worse during the COVID-19 pandemic.”

In a recent 12-month period from early 2021 through early 2022, almost 107,000 Americans died of drug overdoses. In comparison, in 2017, after years of increases in overdose deaths, the US Centers for Disease Control and Prevention reported 70,237 drug overdose deaths in the United States.

Buprenorphine prescriptions have not kept up with the need. One reason, Xu said, is because buprenorphine itself is an opioid, resulting in hesitation to prescribe it to people with opioid use disorder. Unlike methadone, another opioid used to treat heroin addiction, buprenorphine can be taken at home and does not require daily trips to a clinic. But that lack of supervision, as well as a lack of data about the drug’s effectiveness in those who misuse multiple substances, has meant some doctors are reluctant to prescribe it. Xu said the concerns appear to be unfounded.

“Buprenorphine appears to be a safe opioid,” he said. “It’s specifically designed to be different from other opioid drugs in that it won’t cause a user to stop breathing, which pretty much every other type of opioid will do. That means it can be taken safely at home, which is very helpful, even essential, to recovery.”

The study also compared buprenorphine’s ability to help prevent future overdoses to that of the drug naltrexone. Buprenorphine is what’s known as a partial opioid agonist, meaning it activates the same receptor that heroin and fentanyl activate. Naltrexone, on the other hand, blocks that receptor on brain cells.

The data in this study indicated that while both drugs lowered the risk of future overdoses, buprenorphine reduced it more than naltrexone.

“For a long time, people thought that blocking the receptor would be just as good as using a drug, like buprenorphine, to activate the opioid receptor,” Xu said. “But recent data suggest buprenorphine is substantially more effective. Now the challenge will be convincing more doctors to prescribe this safe and effective drug for the patients who need it.”