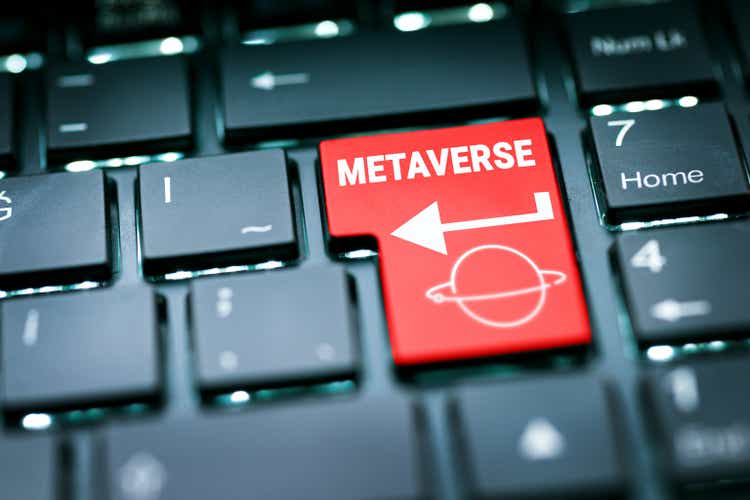 The main word of the end of 2021 was “metaverse.” Giant companies, from social networks to the largest game publishers, are completely changing their development strategies, renaming their most important products and themselves to get into the first stages of the trend.

Facebook has become Meta Platforms (FB), and their Oculus Quest VR (virtual reality) headset has become Meta Quest. Game publishers Ubisoft (OTCPK:UBSFY) and Square Enix (OTCPK:SQNNY) are setting goals for 2022 to create their own metaverse and are in conflict with dissenters. Even Microsoft (MSFT), in the press release of the biggest deal of recent years, the purchase of Activision (ATVI), mentions the metaverse.

Roundhill Ball Metaverse ETF (NYSEARCA:NYSERCA:METV) is a fund with $528 million in assets under management (AUM) and 45 holdings in the portfolio. The fund is tracking the Ball metaverse Index. It primarily includes large-cap US tech companies. METV ETF is the only complete metaverse ETF that you can find right now.

I think that the bet on the metaverse will eventually pay off. I think so because Big Tech companies are very interested in building the metaverse and attracting users to it. The trend has already been set, and I believe that Big Tech will succeed in creating the new high-margin market. The metaverse success basically means that the tech companies will become much stronger and their stocks will reflect it.

Big tech and the metaverse

Big Tech is on another planet, though. In 2021, the Big Five technology companies’ combined revenue reached $1.4 trillion, up almost 30% YoY. Digital transformation alone will not be able to maintain such high growth rates in the long term, even taking into account the fact that over the next five years companies can spend trillions on digitalization. The big techs need the next big market that can feed them, and this should be a high-margin market. The time has come to transfer not only programs and data to the cloud, but the entire physical world in general. The metaverse is called upon to solve this problem, in which the virtual world will become the center of concentration of everything.

The Metaverse is the culmination of the long game of corporations of unification, the unification of content markets. By letting the consumer in, the metaverse, through dozens of individual intellectual properties, crossovers, and multiverses from a wide variety of fields, is able to squeeze out the maximum income.

While many brands now associate themselves with the metaverse, and even more brands plan to enter the virtual world in the coming years, I expect the metaverse to eventually materialize as large-scale ecosystems gravitate toward multiple big techs. They have the financial capacity to invest in the latest technologies, and will be able to profit from the metaverse through competitive advantages and economies of scale.

METV has big stakes in several companies which are already making the steps toward the metaverse: Meta Platforms, Roblox (RBLX), Nvidia (NVDA), and Microsoft.

Since the metaverse is not just a video game or 3D modeling in XR-space, but a set of scenarios and applications focused on entertainment and communication, it is obvious that no one can create such a digital space alone. Each player still strives to close the “future of the Internet” on himself. Today, the Big Tech companies say that any brands and companies will participate in the metaverse, but at the same time they mean that their platform will be taken as the basis.

Among the key players in the emerging metaverse, METV lists virtual reality/augmented reality chip and headset manufacturers, game industry and 3D content developers, cloud platforms and cloud service providers, network infrastructure providers, etc. All of them will definitely contribute to one degree or another to the creation of virtual worlds.

Facebook (Meta) is one of the major players in the development of VR and AR (augmented reality) technologies. The first devices created were VR headsets and related accessories produced under the Oculus brand, designed for video games. The high quality of the devices is appealing to many players, and the company is currently entering the monetization phase for its Oculus headsets. In 2021 alone, the company invested $10 billion in projects related to the metaverse, and more than 20,000 employees are already working on the development of the VR and AR devices necessary to build it.

Meta is more likely to become the first single operator of the metaverse of the future. That’s the reason why Meta is the largest holding company in METV, with a weight of 9.6%.

Roblox is one of the most popular gaming platforms in the world. Roblox intuitively began to work on the metaverse model long before it became fashionable. Roblox is extremely popular with a young audience: in the US, more than half of teenagers use the service. Since the content that developers create on the platform is already going beyond the video games we are used to, Roblox calls it “experiences” now. Users can also create digital items that can be traded for virtual or real currency. Roblox is not just a standalone game. It uses third-party developers to create new content for its users. Roblox’s basis of the metaverse is already here, and the company continues to make it even more sustainable.

Roblox is the second largest company in the METV ETF. Its unique position in the gaming market, that will surely transform into something bigger, makes it a promising metaverse company. Roblox accounts for 7.48% of the portfolio.

microsoft expects to be the link for virtual worlds. In 2021, the company announced the Mesh platform for mixed reality interaction and user experience. Mesh will soon be integrated into Microsoft Teams collaboration space, the Azure and Dynamics 365 cloud services and corporate event space, respectively. Subsequently, Mesh will become the basis for the formation of an ecosystem of new applications and will be available on various devices from any manufacturer. Microsoft also sees its Azure for Business cloud service as a good fit for the metaverse.

Microsoft, as a leading software provider, can become a huge metaverse company due to its enormous size. MSFT is the third largest company in the ETF, with a weight of 7.26%. It is a big bet on the big company.

Nvidia graphics processing units (GPUs) dominate in many ways, making the company a key player in the metaverse. Nvidia is focused not only on improving the performance of the GPU, but also on the introduction of new technologies. In 2021, Nvidia introduced the Omniverse platform for collaborative 3D design and real-time 3D modeling. The Omniverse platform can be used in a variety of applications, from creating video games and virtual spaces to modeling digital twins. Thanks to the Omniverse, BMW, Ericsson, Siemens Energy, and Lockheed Martin already have digital twins.

Nvidia will play an important role in the metaverse. The company will likely use its platform as a necessary basis of the future world. The main advantage of this strategy is that it will be complete B2B, so it doesn’t need to attract everyday users to it. The metaverse will lead to improved hardware devices, including ones that will take consumer and industrial electronics capabilities to a whole new level. That will massively increase the demand for Nvidia products. The company is the main beneficiary of the metaverse-rushers CapEx increase. The share of Nvidia in the portfolio is 7.23%, which makes it the fourth largest holding company in METV.

These four companies account for as much as 31.57% of all holdings. Although it’s hard to predict which companies will succeed in the metaverse, I like that METV bets on companies that are closer to the future than anyone else.

METV was launched on June 30th, 2021 and has failed more than 45% since then. That happened due to the overall market environment as the rotation from growth to value began.

Forecasts for the global metaverse market vary significantly due to the fact that it is currently difficult to identify all of the components of this industry and quantify them. Still, everyone agrees that the metaverse market will grow rapidly in the next decade or so. Fortune Business Insights projects a CAGR of 47.6% for the industry.

METV has lots of big companies connected to the metaverse. I think that this ETF is a good Buy and Hold since I believe that the metaverse will be a large market in the future.