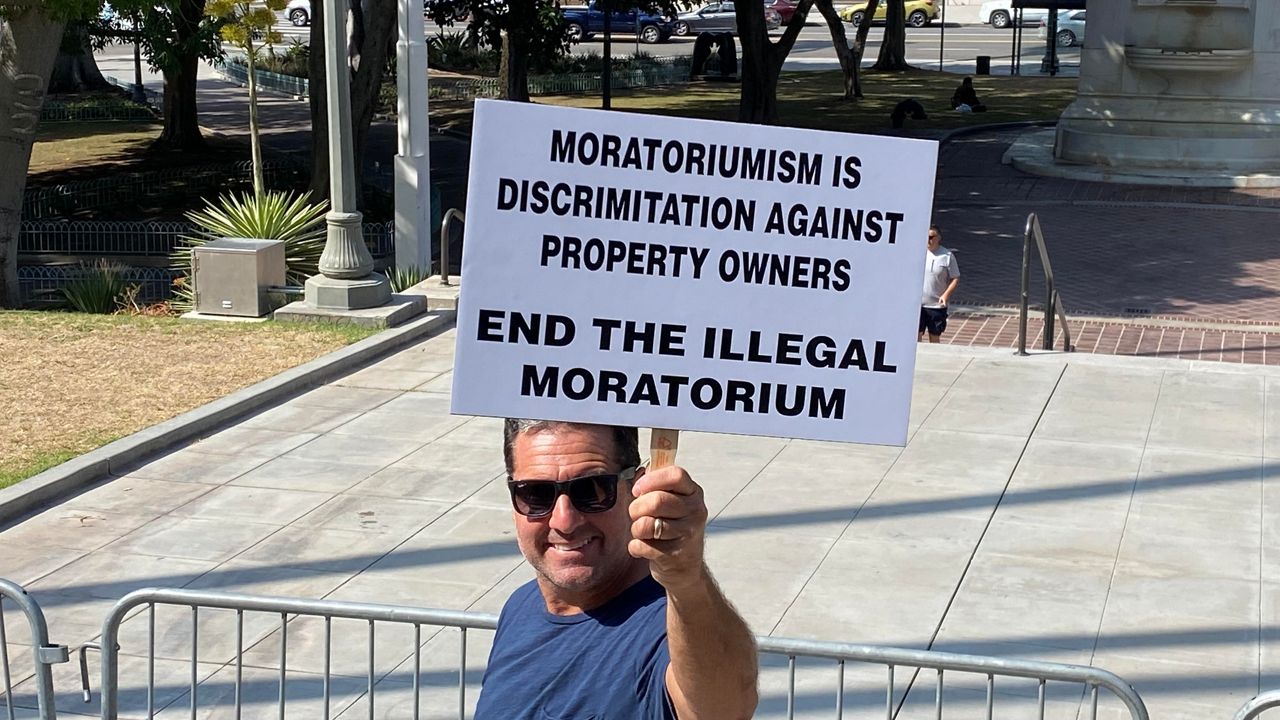 LOS ANGELES — Temperatures were running high at Los Angeles City Hall Wednesday, as activists advocating for tenants’ rights protested outside and mom and pop landlords pleaded with city leaders inside the building to end an eviction moratorium that has been in place for over two years.

“Landlords are not seeking to kick families out of their homes and add to the homelessness crisis. What we want to do is evict bad housing policies,” said Diane Robertson, a small property owner in South LA and founding member of the Coalition of Small Rental Property Owners — a grassroots alliance of landlords who are predominantly people of color.

Robertson said she worked and saved for years to get the down payment together for a duplex and become the first homeowner in her immediate family. But she could not collect rent since the city imposed the eviction moratorium in March 2020, shortly after the pandemic began.

That’s when the City of Los Angeles first declared a local emergency and adopted the moratorium that prevents landlords from evicting tenants who can’t pay rent because of COVID or increasing rent in the city’s rent-controlled units. The reasoning was that COVID imposed hardships such as illness or job loss that might make it difficult for people to pay.

While those eviction protections continue without a stated end date, small landlords argue that masks and vaccines have enabled the rest of the economy to get back to normal, yet they are still bound by an emergency declaration.

“Because the eviction moratorium has dragged on for more than two years, we have not been able to move into our own home,” said small rental property owner Liz Reckart.

A foster parent, Reckart said she and her husband used most of their life savings to purchase half of a duplex that is now occupied by three men in their 30s who have not claimed a COVID hardship.

The small landlord rally at City Hall was just a few doors down from City Council chambers, where dozens of tenants’ rights activists wearing “housing is a human right” T-shirts were gathering to give public comment in response during Wednesday’s meeting.

“These aren’t big companies. These aren’t big conglomerates. Most of the people here own one unit. This is their livelihood, ”LA City Council member John Lee said at the small landlord rally arranged by his office de el, calling for an end date for the city’s eviction moratorium.

Lee has already introduced a motion in the City Council to determine the date when the moratorium will end. He is currently awaiting a report from the LA Housing Department that will include that date, which, he said, is “expected any day.”