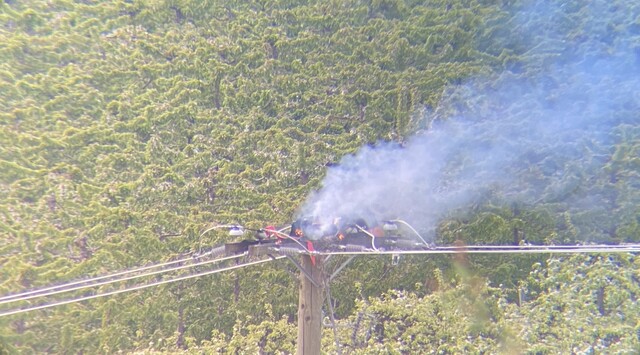 BC Hydro says the recent power outages in Lake Country on across the lake on Westside Road are due to osprey dropping sticks on power lines.

“This is a little bit tricky. Because typically what we do, we have a pole installed with the platform on it that’s designed to encourage Osprey nesting there. But this spring, that platform was actually taken over by a goose,” says BC Hydro spokesperson Dave Cooper.

The geese are nesting and have eggs, so BC Hydro is reluctant to disturb the nest.

According to BC Hydro’s natural resources specialist, geese typically vacate the nest once the eggs have hatched and then the osprey would take over the platform nest.

This is the fourth time in a week that power has been knocked out because of the osprey issue.

Cooper says BC Hydro has osprey guards around trouble spots but so far that’s not discouraging them from continuing to try and build their nest.

“What they do is they’ve been carrying sticks and debris over and basically dropping it into a pile on top of the pole, that’s what caused the fire this morning,” Cooper said.

BC Hydro says they are watching the situation closely and understand that residents impacted by the frequent power outages are frustrated. BC Hydro says the next steps would be to put geese decoys in the trouble spots to discourage the osprey from trying to build in certain areas. Failing that, BC Hydro would look at dealing with the geese.

“I think at this point, our line crews are considering that. But that’d be one option that we could look at as well. But again, we’re hoping that over the next couple of days here that the goose will vacate and free up that platform.

If the geese don’t vacate the nest BC Hydro has also informed the BC Conservation Officer Service and they may have to get involved if the birds don’t sort the issue themselves.

The power in Lake Country is out again.

More than 3,500 BC Hydro customers are without power Thursday morning.

BC Hydro indicates a crew is on the way. Images shared with Castanet by our readers show a nest on fire and Oceola Road is closed from Highway 97 to the roundabout at the top of the hill except for locals.

Lake Country has been experiencing frequent power outages over the past week.

“It’s osprey nests that have been causing a lot of havoc on the lines,” explains Dave Cooper with BC Hydro. “On Friday, actually, one of them caused a fire and actually a pole had to be replaced due to a fire.”