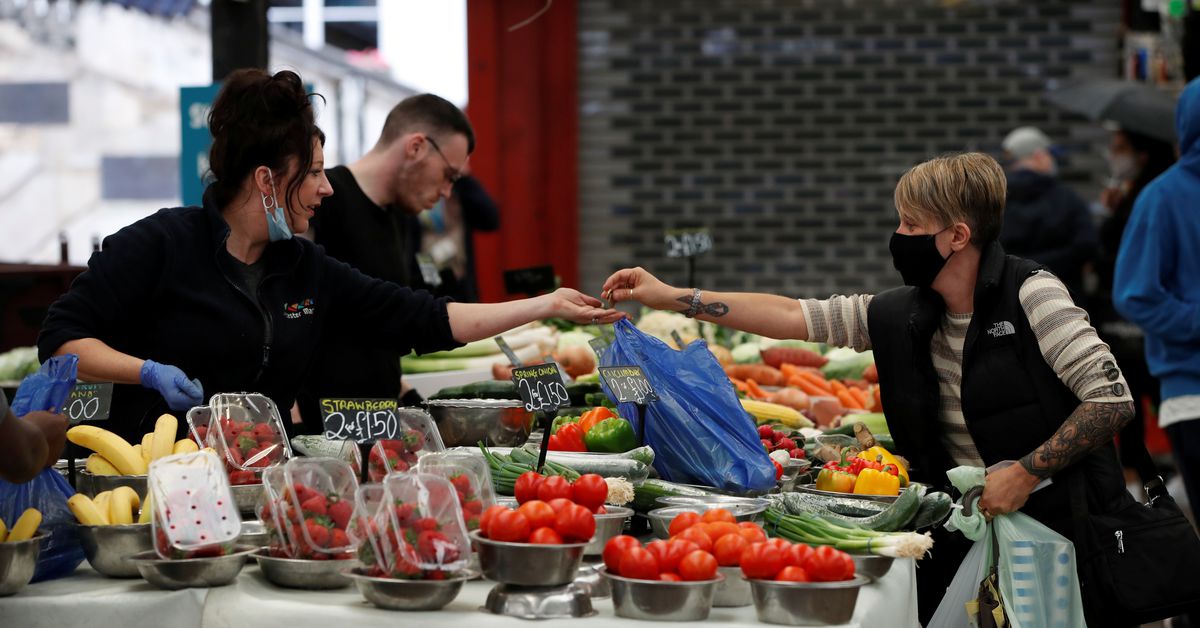 A woman does groceries as restrictions in the city have started to ease, amid the outbreak of the coronavirus disease (COVID-19), at a market in Leicester, Britain, August 19, 2020. REUTERS/Paul Childs

Another day, another miserable set of British data.

“A sense of exasperation” and “crisis of confidence.” That was the sombre message from Britain’s longest-running survey of household finances released on Friday. read more

The record low of -44 in the Gfk consumer sentiment index in August, worse than what economists expected, underscores a summer of discontent that shows no signs of receding.

No wonder, the frontrunner to be Britain’s next prime minister Liz Truss says her government’s defining mission would be to revive the economy. read more

But with Britain scoring the dubious distinction of becoming the first major rich economy to see price growth hit double digits, the Bank of England is set to raise interest rates by a further half point to 2.25%.

Retail sales data due on Friday will set the mood for markets. Growing worries about a weaker British economy kept sterling on the back foot, as it fell to a one-month low.

Euro zone inflation reached a new record high of 8.9% year-on-year in July and a nasty feedback loop is opening up as the current account deficit weighs on the euro and import bills swell for raw materials from gas to metals.

Asian shares were left in limbo on Friday while the US dollar rose to a fresh one-month high against a basket of major peers as Federal Reserve policymakers continued to talk up the need for further interest rate hikes.

On the soccer pitch, meanwhile, it looks like deep pockets are needed to persuade the Glazer family to part with Manchester United, though fans hope a successful sale could pave the way for a return to winning ways for the club.

Key developments that could influence markets on Friday: