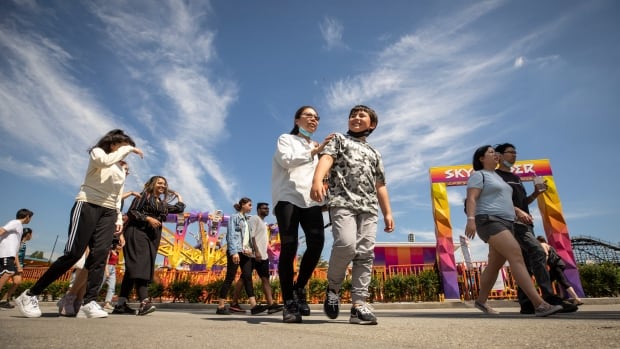 Heat warnings were issued early Monday for most of British Columbia as a long-duration heat wave takes effect.

According to Environment Canada, temperatures along the coast could reach up to 35 C inland and the upper 20s near the water. In the southern Interior, temperatures in the forecast range from the mid-30s to more than 40 C.

The heat warnings issued Monday stretch across most of BC including Metro Vancouver, eastern and central Vancouver Island and the southern Interior north to the Bulkley Valley and Fort Nelson areas.

The weather agency says peak temperatures are expected from Wednesday to Friday, before a slow cooling trend comes in next weekend.

“A strong ridge of high pressure will bring a heat wave to British Columbia this week,” Environment Canada said Monday.

“Environment Canada and local medical health officers expect an increase in health and safety risks from heat and are advising the public to take precautions.”

“A lot of us don’t have air conditioning, particularly on the coast,” Castellan said on CBC’s On The Island. “Indoor temperatures are particularly difficult for certain population groups.”

In a statement last Tuesday, the ministry said people should identify cool zones in their homes and at nearby community centers or libraries.

Scott Houston, the supervisor of emergency management of the City of Burnaby’s community service department, says the city’s cooling centers have no capacity restrictions and, for the first time this year, are also welcoming pets.

“One of the things that were identified last year is that people didn’t want to leave their pets,” Houston told CBC’s The Early Edition. “It’ll be a lot easier for people to come in and take advantage of the cool air.”

The plan should also identify vulnerable family members and neighbors who are at risk of heat illnesses and need regular checkups, and include ways to cool down, such as taking showers and drinking plenty of water.

BC seniors’ advocate Isobel Mackenzie urges people to check in with their elderly family members as much as possible during periods of high heat.

“Older adults, particularly people well into their 80s and 90s, may not understand or appreciate the impact the heat is having on their body, because as we get older, our thermal regulating processes degrade,” Mackenzie said on CBC’s Daybreak Kamloops.

The province announced a heat alert system in June to set temperature ranges and government responses during heat warnings or emergencies, after the BC Coroners Service said more than 600 people died during the extreme heat wave last summer.

CBC meteorologist Johanna Wagstaffe says while it isn’t expected to get as hot as last summer’s heat dome, the concern with this heat wave is its longevity.

She also said wildfire danger will increase significantly in the days to come.