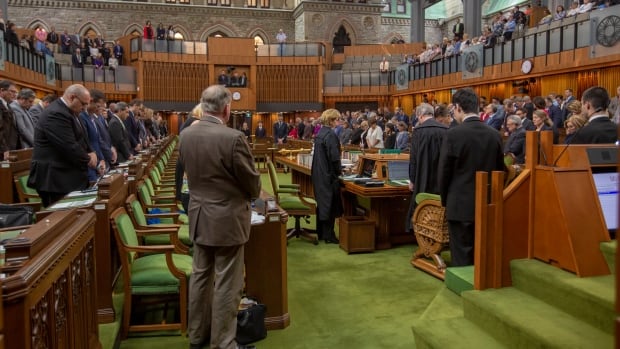 MPs will debate and then vote on a motion calling for the immediate removal of the reading of the prayer that takes place before the House of Commons sits every day.

Bloc Québécois MP Martin Champoux is sponsoring the binding motion in the House, which will be debated by MPs on Tuesday.

A vote on the motion will be held Wednesday, said a spokesperson from the government House leader’s office. If it passes, it would replace the prayer with a moment of reflection before the start of business for the day.

The motion says that the prayer should be scrapped because the House “respects the beliefs and non-beliefs of all parliamentarians and of the general public and it is committed to the principle of the separation of religion and the state, the diversity of views and freedom of conscience while upholding the secularism and religious neutrality of the state and out of a desire for inclusiveness.”

The Speaker of the House of Commons reads the prayer every morning before the cameras in the chamber have been turned on, or members of the public or media have been permitted entry to the House.

Parliament’s website says that the Speaker, MPs and table officers must stand during the prayer, which is followed by a moment of silence.

Though usually a closed-door affair, the prayer was televised on Oct. 23, 2014 — the day after the shooting at the National War Memorial and inside Parliament’s Center Block.

“Almighty God, we give thanks for the great blessings which have been bestowed on Canada and its citizens, including the gifts of freedom, opportunity and peace that we enjoy. We pray for our sovereign, Queen Elizabeth, and the Governor General. Guide us in our deliberations as members of Parliament, and strengthen us in our awareness of our duties and responsibilities as members.Grant us wisdom, knowledge, and understanding to preserve the blessings of this country for the benefit of all and to make good laws and wise decisions . Amen.

The traditional prayer before House of Commons business is usually private but was public on October 23, 2014, after the Ottawa shooting.

The prayer has been part of the daily House proceedings since 1877 and was codified in standing orders in 1927.

In 2015, the Supreme Court of Canada ruled that a municipal council in the Quebec town of Saguenay could not continue to open its meetings with a prayer. The unanimous decision said reciting a Catholic prayer at council meetings infringed on freedom of conscience and religion.

Following the decision, Ottawa Mayor Jim Watson replaced the prayer at the beginning of city council meetings with a moment of reflection, but Parliament is protected by parliamentary privilege and is able to set its own rules.

Prime Minister Justin Trudeau sounded cold to the idea as he went into a cabinet meeting in Ottawa on Tuesday morning.

Government House leader Mark Holland said the House of Commons has a debate every June about the standing orders in the House and that it would have been a better time for the Bloc to have raised the issue.

“I think it’s strange that the Bloc would choose one of their three opposition days — they only get three a year — to deal with this when we already have a day set aside to deal with standing orders,” he said.

Holland said the House should be dealing with more pressing issues, such as the pandemic, housing and the war in Ukraine.

As the Bloc Quebecois prepare a motion to abolish prayer at the opening of the sitting of the House of Commons, Prime Minister Justin Trudeau says Canadians are focused on housing and the war in Ukraine.

New Democrat MP Daniel Blaikie said an opposition day motion that provides just 24 hours’ notice isn’t the best way to “foster the right dialogue” about ending the prayer, which he said should be broader in scope.

“I know New Democrats have often felt, if we’re going to talk about changing the opening ceremony for Parliament, that we ought to have a land acknowledgment as part of that opening ceremony,” he said.

Blaikie said it is a worthwhile effort, and it’s a good thing to think critically about how sittings are opened and whether a faith prayer can be a part of that, but, he added, there is more than one way to have that discussion.

“They’ve proposed one, they’ve proposed it with very little short notice and not a lot of consultation in advance, and I do question, personally, whether that’s the right way to go about it,” he said.

NDP caucus chair Jenny Kwan said that the caucus would discuss the motion and she did not want to prejudice the caucus decision by suggesting how the party might vote.