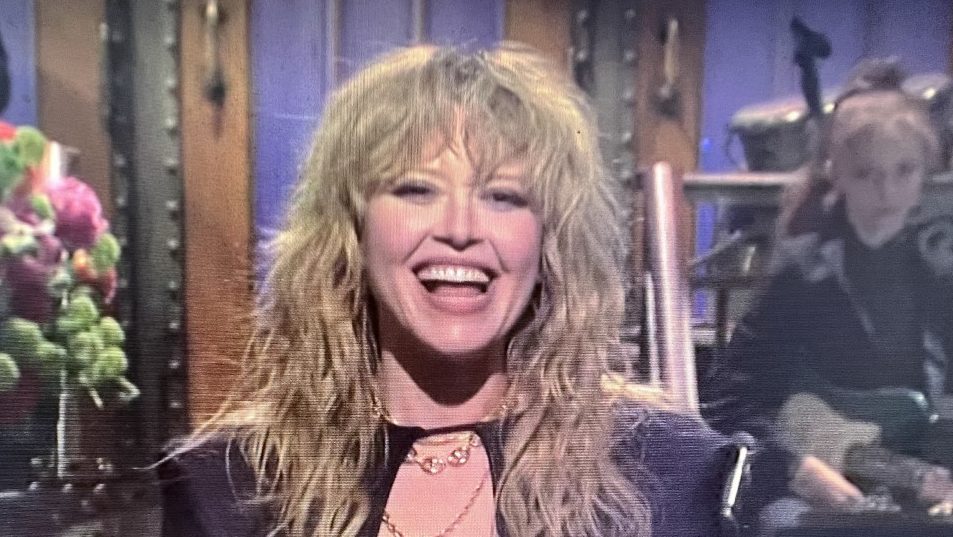 russian-doll‘s co-creator and star Natasha Lyonne tonight hosted her first episode of SNLspeaking in her opening monologue about her Netflix series—which is back now for its second season following Covid delays—and more.

“Gosh, will you look at this? I’m hosting the season finale of Saturday night Live. For a real New Yorker like me, that’s big,” Lyonne said up top. “I have a show called Russian Doll. The second season…just premiered on Netflix, and two things you really want to be associated with right now are Russia and Netflix.

Lyonne went on to say that she’s “genuinely humbled” to be hosting NBC’s sketch series and that the truth is, she feels “a cosmic connection” to it. “The people here are my real-life chosen family. I’ve been coming here since I was a teenager,” remarked Lyonne. “I co-created russian-doll with Amy Poehler, and I have great friends from the show…”

Coming to the stage at this point were SNL alums Maya Rudolph and Fred Armisen, who asked Lyonne if she was busy, then proceeding to do their impressions of the host. (This consisted of the pair saying expressions like “Ipso facto” and “Cock-a-roach” with a raspy voice and squinted eyes.)

Following Armisen and Rudolph’s exit from the stage, Lyonne shared that she dated the former for a period of seven years. “We’re the only couple with a sex tape nobody wanted to buy,” she joked, then transitioning back to discussing her love of SNL.

“SNL combines everything I like: New York City, show business, people who have done the same thing since the ’70s, and different unions fighting. I love it,” she said. “I mean, I’m a New York City kid and a show biz baby. Weird story, but while I have you, listen to this.”

Lyonne proceeded to share that she was born in New York—”doesn’t matter what year, early ’80s probably.” Back when she was quite young, her parents got the idea that she might have a future in show business, so she started auditioning. “A lot of casting directors, it turns out, are looking for a Little Orphan Annie type who talks like Dee Dee Ramone,” she deadpanned. “Here’s a clip of me from one of my earliest roles.”

We then cut to a clip of Lyonne as Opal in a 1986 appearance on Pee-wee’s Playhouse, which she joked is her “best work” to date. “Anyway, I do some TV, my mom and I move to the Upper East Side. Suddenly, I’m in the movies,” said Lyonne. “Oh, I was in all those ’90s movies: american pie, American Pie 2, American Pie in the Multiverse of Madness, etc. Oh, and a cult favorite called But I’m a cheerleader.”

Lyonne admitted that she went “to hell and back” at that time, and that life was once rough. “But just like when Fabio was on that rollercoaster and the bird flew in his face…Hey, do we have a photo of that?” she asked, as a shot of a bloody-nosed Fabio came on the screen.

“Yeah, yeah. yeah. Just like when that happened, I brushed myself off, and I got back on the ride. And now I’m here,” Lyonne continued. “All right, so I’m conflating events, glossing over entire decades. But I’m here, and I’ll tell you what I’ve found. There’s always hope in despair, and there’s always a reason to get back in the ring and fight another day.”