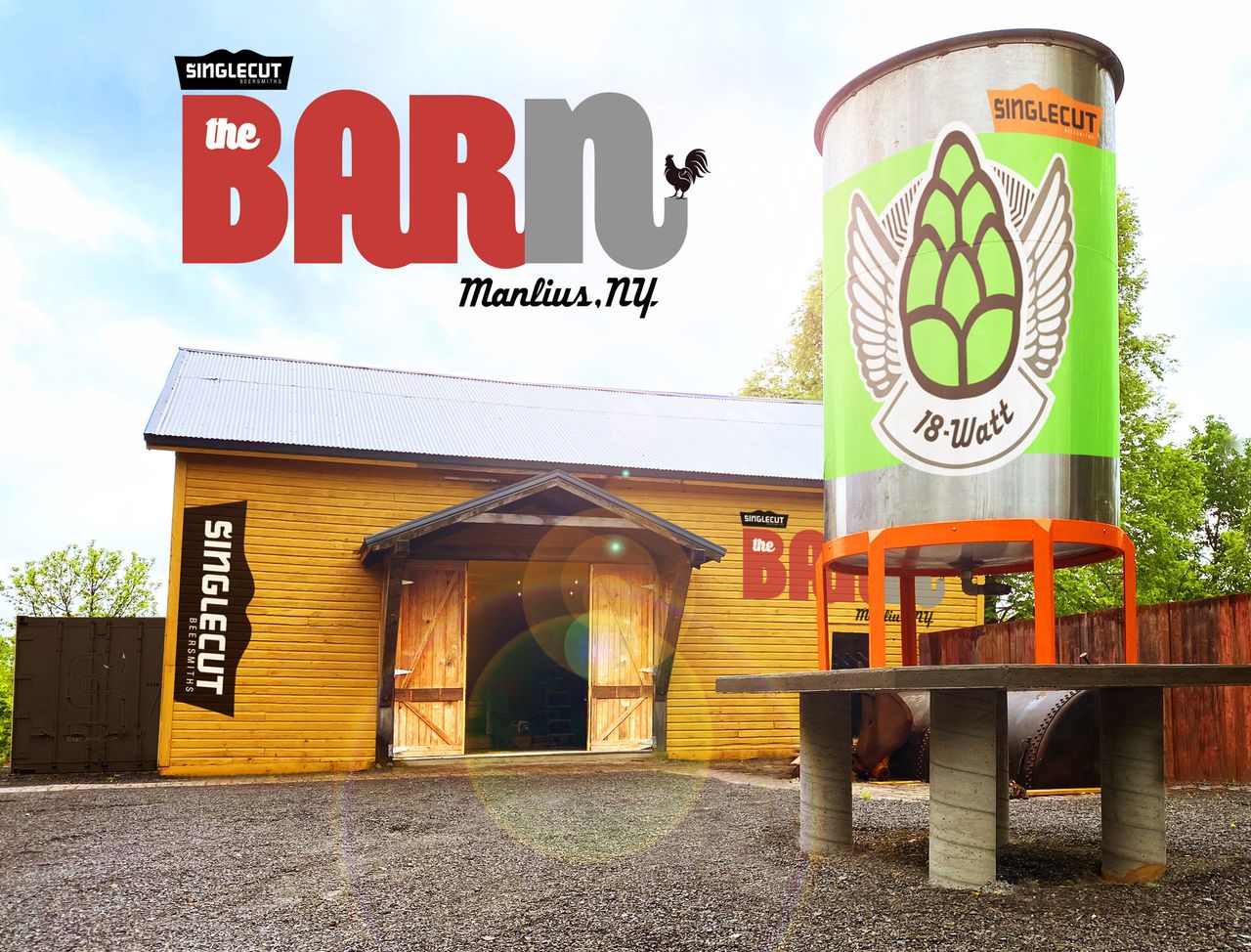 Manlius, NY — The Singlecut Barn, a local outlet for the beers of New York City brewer SingleCut Beersmiths, is scheduled to open in Manlius with some “previews” starting in early September.

The taproom will be located in and around a 200-year-old barn at The Yard, an artists’ hub and events space at 604 E. Seneca St. (Route 173). That’s roughly midway between the village center and Fayetteville-Manlius High School.

The local taproom, first announced in February, will be the second Upstate New York location for SingleCut, a brewery founded in Astoria, Queens in 2012. The original brewery is located not far from the Steinway piano headquarters, and has built a reputation for ground -breaking beer styles, often with names associated with music production and performance.

In 2018, SingleCut owner Rich Buceta bought the former Shmaltz brewing facility in Clifton Park, north of Albany in Saratoga County. That move allowed Buceta to have a bigger production space and its first Upstate New York taproom, while keeping the Queens brewhouse open for smaller batch and experimental beers.

The Manlius location will be the company’s first standalone taproom (without a brewhouse).

The Yard is owned by John Freightenburgh, former owner of Ironwood Pizza in the village (and before that a mobile pizza rig that operated around the Manlius area). Freightenburg bought The Yard, a former lumberyard, just before the Covid pandemic, and has been working to fill it with shops, artists spaces and attractions.

The new taproom will occupy the rustic barn, but will also have a large outdoor beer garden, said SingleCut general manager Dan Bronson. It will feature 24 draft lines, plus cans and crowlers, for consumption on site or to-go. It will host live music and offer a snack menu from AW Wander, the craft beer-centric bar and store that took over the former Ironwood space (and its pizza oven) in 2020.

The September opening, pending license approval, will be a “fall preview,” Bronson said, leading up to what he called a “blow out concert” on Dec. 1.

After that, he said, the bar will close temporarily for “winterizing,” but there should still be regularly scheduled weekly pickup for can releases. Bronson also hinted at an outdoor “Fire Scoop Bar” to warm up those coming by for beers in the colder months.

“Did we just say ‘Fire Scoop Bar’?,” Bronson wrote in a message to syracuse.com and social media posts. “Let’s just say The SingleCut Barn has some architectural features you’ve never seen before and these hot seats are going to be ‘hot seats’ all fall and winter long.”

Bronson also gave a shout-out to “the Manlius/Fayetteville community who have been unbelievably supportive and welcoming — we can’t wait to have a pint (or three) with y’all.”

More news on drinks and bars in CNY: