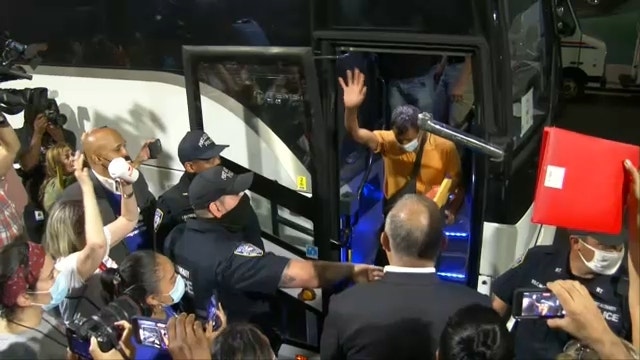 As New York City and Washington DC feud with the governors of Texas and Arizona over the border states’ busing of migrants to their cities, their own sanctuary city policies are the subject of a reignited debate — as the Republican governors cite the liberal policies as justification for the buses.

Thousands of migrants have been sent from Texas and Arizona to the two Democratic-run cities, both of which have repeatedly proclaimed and reaffirmed their commitment to protecting illegal immigrants from deportation and making their states welcoming havens.

“Sanctuary” jurisdictions refer to cities or states that restrict local law enforcement from cooperating with federal immigration agencies. Such cities and states will often also move to abolish any distinction between legal and illegal immigration.

After the 2016 election, DC Mayor Muriel Bowser reaffirmed the city’s status, saying “we celebrate our diversity and respect all DC residents no matter their immigration status.”

Migrants wave as they depart bus in New York City from Texas.
(FoxNews)

Adams said in 2019: “To anyone in the world fleeing hatred and oppression, the ultimate city of immigrants wants you to remember: you’re ALWAYS welcome here.”

“‘We should protect our immigrants.’ Period,” he tweeted in 2021 when campaigning. “Yes, New York City will remain a sanctuary city under an Adams administration.”

But Texas and Arizona began sending buses of migrants to Washington DC this Spring, and Texas has recently started sending buses to New York City as well. A waiver form given to migrants says that New York City “has been designated as a sanctuary city by its City Council, and is providing shelter and food to migrants who have entered the country.”

While the numbers being sent, just over 10,000 so far, are dwarfed by those encountered at the border, which number around 200,000 each month, the mayors have slammed the moves by the border states — while calling for federal aid.

Bowser has repeatedly called for the deployment of the National Guard, while describing the migrant influence as a “humanitarian crisis.”

“The number of people crossing the border seeking asylum, we expect only to go up, and we need to make sure there is a national response,” Bowser said.

Adams has also called for federal help: “We just need help. We need help,” he said earlier this month, while also taking aim at Abbott.

“He is an anti-American governor that is really going against everything we stand for. And I am going to do everything feasible to make sure the people of Texas realize how harmful he is to us globally,” he said of Abbott.

But border officials have noted the sanctuary city status, with officials in Texas citing it — along with other border policies — to justify sending the migrants to the places where they are more welcome.

“It’s just interesting to see some of these mayors who have invited and have created sanctuary cities to suddenly start complaining that they’ve got a few thousand immigrants when we’re dealing with millions,” Attorney General Ken Paxton said on “Fox and Friends .”

“New York is a sanctuary city. Mayor Adams said they welcome in illegal immigrants, but now that they have to deal with the reality of it they’re suddenly flummoxed and cannot handle it,” Abbott said in an interview with “The Faulkner Focus .”

Neither the DC or New York City mayors’ offices responded to requests for comments from Fox News Digital about whether they are reconsidering their sanctuary policies given the migrant surge. But Adams in particular has touted what he sees as a more welcoming response from the City.

“Unlike the governor of Texas, who did what I believe is anti-American. I did the opposite and those asylum seekers were happy to hear that the mayor of the City of New York was standing there and stating, ‘We’re going to treat you with dignity.'” he said last week.

Former acting Immigration and Customs Enforcement (ICE) Director Thomas Homan told Fox News Digital that he welcomed the pressure being placed on the two liberal cities, and said both cities vigorously opposed ICE’s efforts to get criminal illegal immigrants off the city when he was running the agency.

“We had a staff on Rikers Island [prison complex] for years, and they even kicked us out of Rikers Island,” he said.

“Extremely uncooperative,” he said of NYC. “DC was the same, meetings with them…we came out with nothing. They didn’t want to hear it,”

He also cited certain policies from New York City in addition to the sanctuary policies, including barring the term “illegal alien” and giving illegal immigrants drivers’ licenses and other assistance that he says already encourages migrants to go to the Big Apple.

He says that now he welcomes Abbott’s moves, saying it raised the issue of sanctuary cities in the mainstream media — where such policies are again being talked about.

“I also think he’s calling out politicians for claiming to be sanctuary cities because it’s good for their political careers – but when you actually give them people, put people in their welcoming communities, they’re pushing back against it,” he said.

Homan added that he hopes it will add pressure to the White House on its border policies as well, which he and other former Trump officials have blamed for exacerbating the crisis at the border.

“I think Governor Abbott’s taking a stab at raising the temperature and trying to get attention on the subject and hopefully pushing the White House to take some action,” he said. “I think what he’s doing is great.”

Adam Shaw is a politics reporter for Fox News Digital, with a focus on immigration. He can be reached at [email protected] or on Twitter: @AdamShawNY