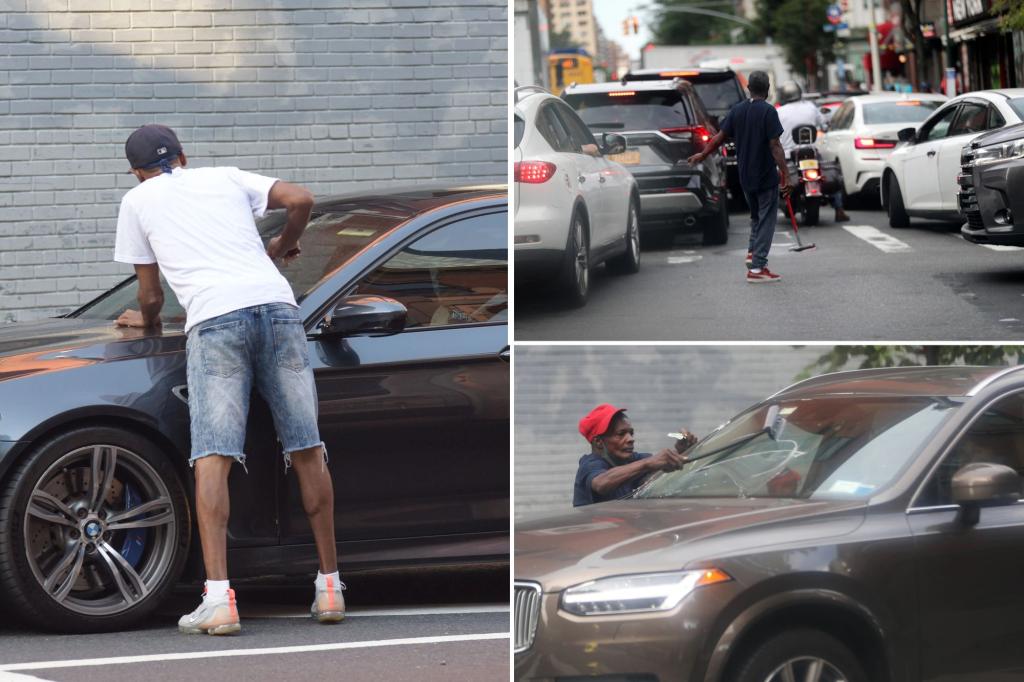 The Big Apple just can’t wash itself clean of this stain.

The notorious squeegee men are back to their bad old ways terrorizing Midtown motorists — and aggressively demanding money for their shoddy, unsolicited services.

The Post witnessed a crew of the wayward washers targeting vehicles at the congested West 40th Street and Ninth Avenue intersection on multiple occasions within the last week.

“Where are the cops? I mean, this is stressful enough, just driving in, that was like a shakedown!” New Jersey woman, who asked not to be named, said Tuesday just moments after a squeegee man suddenly approached her car.

The panhandling window-washers approached several vehicles stopped at red lights — sudsing up windshields without warning and then harassing cash from the drivers.

In one instance, a squeegee man lifted up the wipers on a car with New Jersey plates and quickly sprayed soapy water across the windshield before the female driver even had a chance to say no.

When the driver subsequently refused to hand over cash for the unsolicited act, the man — who demanded “Help me out!” — bolted, leaving the woman stranded at the busy intersection, unable to wipe the windshield clean.

The dirty deed denizens — who became the face of ex-Mayor Rudy Giuliani’s quality-of-life crackdown in the 1990s — made a sudden return to the busy Manhattan intersection about three weeks ago.

And the warrantless window-washing has been relentless ever since.

Despite taking to the streets in previous years with highly organized groups of four to five men, The Post only witnessed teams of two targeting drivers on any given day.

John Giglio, 60, who works at the Sea Breeze Fish Market, said he sees the men take to the streets — armed with their soapy buckets — early every morning.

“It came back with the warm weather. They started up again three weeks ago and it’s like they never left,” Giglio said.

“And they know who to target, always the women. They know the women pay because they don’t want any trouble.”

In addition to female drivers, The Post saw several window-washers targeting flashier rides, including an Audi, BMW and Lexus.

“Welcome to the Wild Wild West Side,” a New Jersey driver named Eric quipped immediately after his squeegee encounter.

A Pennsylvania driver who gave his name as Bill took aim at the Big Apple’s lax bail laws for helping encourage the squeegee scourge.

“They are always here, at this freaking spot at 8 am I guess it’s not worth arresting them if you just let them out the same day,” he said.

“But really, how hard is it to move these guys?! Put a traffic cop here to stop the gridlock and watch for these guys. Boom, done. I wouldn’t mind so much if they picked another spot.

“This is like the worst choke point in the city,” he added, referring to the intersection near the Lincoln Tunnel that’s known to back up during rush hour.

While the window-washing vagrants have long plagued city streets, some are now brazenly trying to get drivers to hand over money in exchange for leaving them alone.

“Now they want money not to touch your windows,” Giglio, the local employee, raged as he pointed out a man holding a sign saying “I don’t do windows” as he tried to coax cash from drivers.

“Look at the guy’s sign, ‘I don’t do windows’, and he’s knocking on windshields. Gettingmoney. Extortion.”

It wasn’t immediately clear if the NYPD planned to crackdown on the return of the notorious squeegee men amid a recent rise in panhandlers terrorizing drivers in the middle of bustling roadways.

During his campaign for mayor, Eric Adams revealed he was once a squeegee man — and vowed to get the guys off the streets without police intervention.

“What I’m going to do with the squeegee men, I’m not going to go there with a police officer,” Adams said in June 2021.

A spokesperson for City Hall said Mayor Adams “has been clear about his dedication to ensuring all New Yorkers are able to make an honest living and put food on the table.”

They added: “This administration is proud to have already created more than 100,000 new jobs within the course of just seven months and is committed to building out the city’s workforce even further with equity and inclusivity at top of mind.”