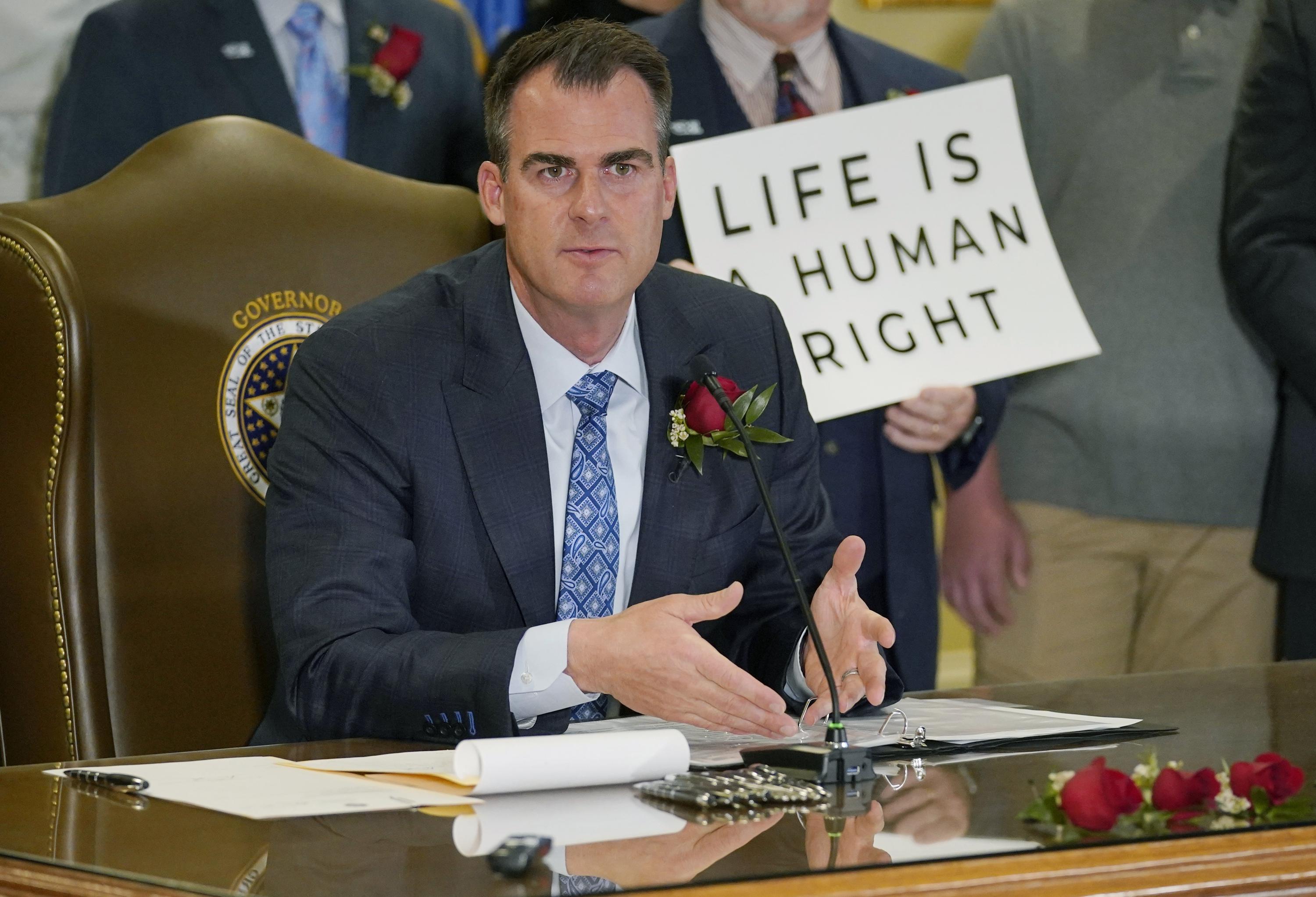 OKLAHOMA CITY (AP) — Oklahoma Gov. Kevin Stitt on Wednesday signed into law the nation’s strictest abortion ban, making the state the first in the nation to effectively end availability of the procedure.

State lawmakers approved the ban enforced by civil lawsuits rather than criminal prosecution, similar to a Texas law that was passed last year. The law takes effect immediately upon Stitt’s signature and prohibits all abortions with few exceptions. Abortion providers have said they will stop performing the procedure as soon as the bill is signed.

“I promised Oklahomans that as governor I would sign every piece of pro-life legislation that came across my desk and I am proud to keep that promise today,” the first-term Republican said in a statement. “From the moment life begins at conception is when we have a responsibility as human beings to do everything we can to protect that baby’s life and the life of the mother. That is what I believe and that is what the majority of Oklahomans believe.”

Abortion providers across the country have been bracing for the possibility that the US Supreme Court’s new conservative majority might further restrict the practice, and that has especially been the case in Oklahoma and Texas.

“The impact will be disastrous for Oklahomans,” said Elizabeth Nash, a state policy analyst for the abortion-rights supporting Guttmacher Institute. “It will also have severe ripple effects, especially for Texas patients who had been traveling to Oklahoma in large numbers after the Texas six-week abortion ban went into effect in September.”

The bills are part of an aggressive push in Republican-led states to scale back abortion rights. It comes on the heels of a leaked draft opinion from the nation’s high court that suggests justices are considering weakening or overturning the landmark Roe v. Wade decision that legalized abortion nearly 50 years ago.

The only exceptions in the Oklahoma law are to save the life of a pregnant woman or if the pregnancy is the result of rape or incest that has been reported to law enforcement.

The bill specifically authorizes doctors to remove a “dead unborn child caused by spontaneous abortion,” or miscarriage, or to remove an ectopic pregnancy, a potentially life-threatening emergency that occurs when a fertilized egg implants outside the uterus, often in a fallopian tube and early in pregnancy.

The law also does not apply to the use of morning-after pills such as Plan B or any type of contraception.

With the state’s two remaining abortion clinics expected to stop offering services, it is unclear what will happen to women who qualify under one of the exceptions. The law’s author, State Rep. Wendi Stearman, says doctors will be empowered to decide which women qualify and that those abortions will be performed in hospitals. But providers and abortion-rights activists warn that trying to prove qualification could prove difficult and even dangerous in some circumstances.

In addition to the Texas-style bill already signed into law, the measure is one of at least three anti-abortion bills sent this year to Stitt.

Oklahoma’s law is styled after a first-of-its-kind Texas law that the US Supreme Court has allowed to remain in place that allows private citizens to sue abortion providers or anyone who helps a woman obtain an abortion. Other Republican-led states sought to copy Texas’ ban. idaho’s governor signed the first copycat measure in March, although it has been temporarily blocked by the state’s Supreme Court

The third Oklahoma bill is to take effect this summer and would make it a felony to perform an abortion, punishable by up to 10 years in prison. That bill contains no exceptions for rape or incest.