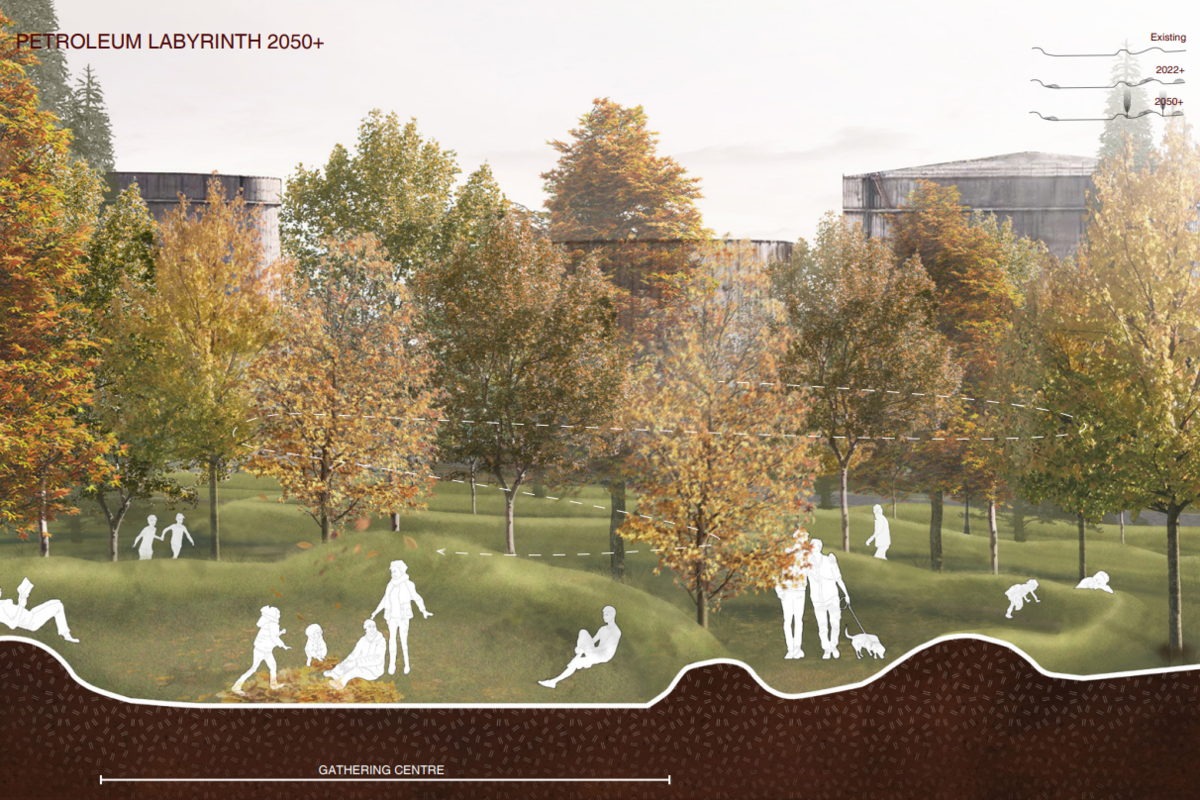 Check out renderings by a landscape architecture student that visualize possibilities for the 200-acre North Burnaby Shellburn distribution terminal site.

As Burnaby reimagines its Lochdale neighborhood into an urban village, a large patch of land north of the neighborhood sits quietly unchanged.

It’s more than 200 acres of land on the shores of the Burrard Inlet: the Shellburn distribution terminal at 6511 Hastings St. — Shell Canada’s first Canadian refinery, built in 1932.

In a new thesis out of the University of British Columbia’s landscape architecture program, graduate student Yueying Zhang studied what the site could look like in the future and how it could be incorporated into its surrounding neighbourhood.

The Shellburn site is no longer an active refinery site, but had a daily capacity of 35,000 barrels by 1982. It was converted into a terminal for shipping and receiving in 1993, as it stands today.

Zhang’s renderings depict the Shellburn site as a space for collaborative community gardens, a salt marsh and a “petroleum labyrinth” in which a winding path leads people around the post-industrial landscape.

In her reimagining, the large oil tanks remain a major feature of the park — Zhang said it’s to give visitors a visual shock at the size and scale of the infrastructure up close, showing the impact of industrialism.

“It gives people a reminder of the past; it shows the identity of a certain region,” she said, adding it could even make people uncomfortable.

“Keeping those industrial relics is a way of helping the locals to remember their past.”

There’s a variety of approaches to restoring brownfield sites. Zhang said one is the camouflage approach, where all the industrial structures are torn down.

“You cannot see the identity or the past of the site,” she said. “You hide everything.”

Instead, Zhang preferred the educational approach, like what was used for the Landschaftspark Duisburg-Nord in Germany, which she said encourages people to interact with the industrial structures.

The German park features oil tanks that have been converted into diving pools for the public to use for recreation.

“When people truly interact and experience the site with the past structures, you wonder what was happening here before?” Zhang said.

Zhang wrote her thesis through an environmental justice lens, a framework that theorizes no matter a person’s social status, income or race, and no matter the species (human or nonhuman), all should have the equal right to enjoy nature.

The future of oil sites

As people shift to cleaner energies (Canada’s climate target is net zero emissions by 2050), Zhang said there will be more and more unused oil sites.

According to the city’s Lochdale urban village plan, if Shell explores alternative land uses, “the public and other stakeholders would play a key role in considering how these uses would best be integrated with the existing urban village community, in a gradual and incremental manner. ”

Because of the property’s scale, any future redevelopment would include public consultation and council consideration.

Shell wrote to the NOW in an emailed statement that it regularly assesses future opportunities for its sites, but for now the Shellburn site will remain a distribution terminal.