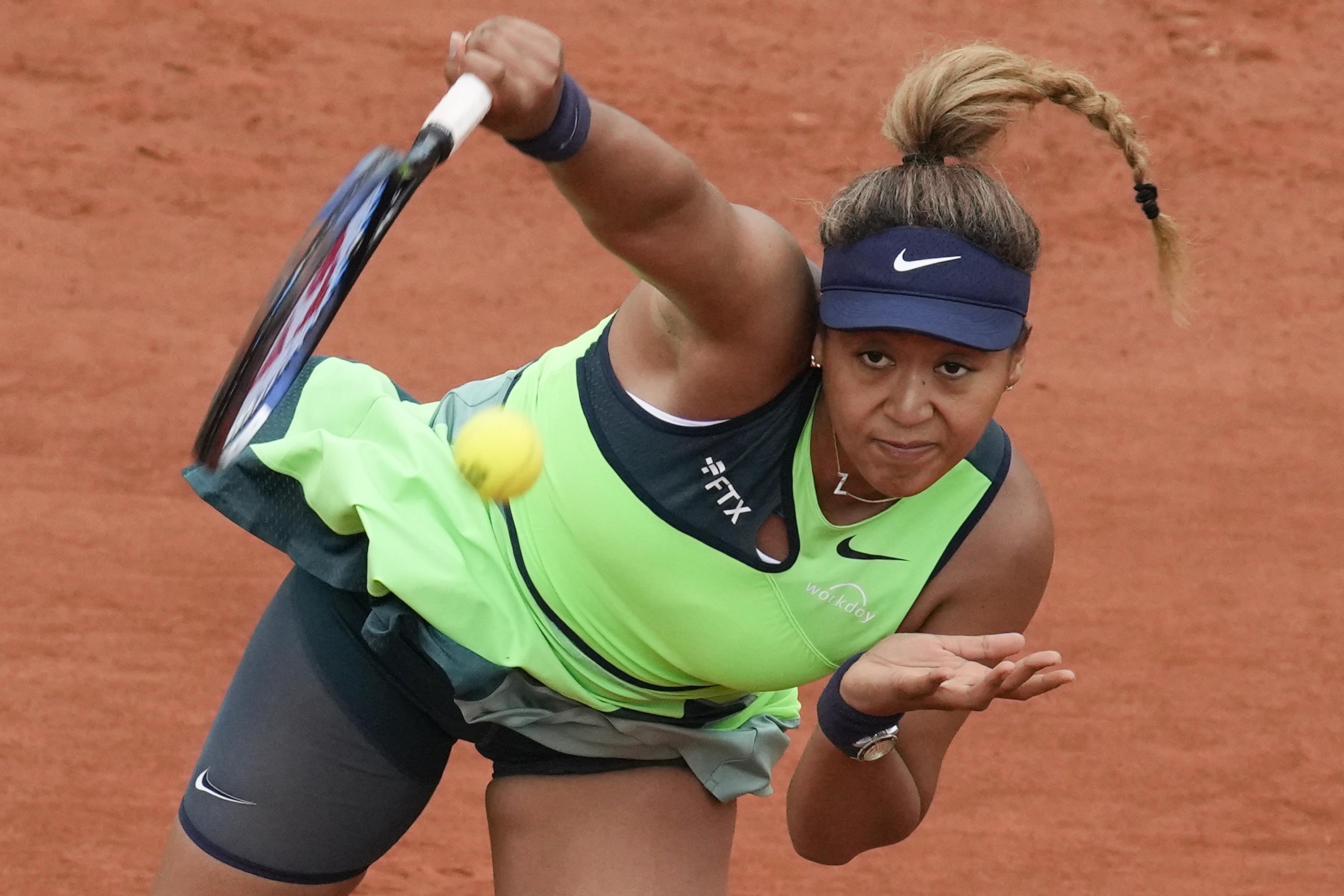 PARIS (AP) — Naomi Osaka’s 2022 French Open is over following a first-round loss. The players remaining in the tournament see and hear products of her frank discussion about anxiety and depression a year ago — from new “quiet rooms” and three on-call psychiatrists at Roland Garros to a broader sense that mental health is a far-less- taboo topic than it once was.

“I remember after I got back from France last year and having photographers follow me even at random places like the grocery store. It really felt odd and a bit overwhelming, until one day a woman came up to me and told me that by speaking up, I helped her son de ella, ”Osaka wrote in a recent email to The Associated Press. “In that moment, it did all feel worthwhile.”

In conversations with The AP shortly before or during the French Open, which began Sunday, several professional tennis players credited Osaka with helping bring the subject out of the shadows for their sport and, in concert with the voices of other athletes such as Olympic champion gymnast Simone Biles, helping foster more awareness and concern.

“I definitely think it’s something that is paid attention to way more than it was, at least when I was coming up as a teenager. I don’t even think I knew what it was when back then. And we’re seeing people speak out and normalize it a bit in a way where it’s OK if you’re struggling with something — it doesn’t matter if it’s on the court, off court, whatever,” said Jessica Pegula, 28 -year-old from New York who reached the French Open’s second round Tuesday.

“In tennis, the life we ​​kind of live is not so normal,” she said. “It can lead to a lot of unhealthy habits.”

Taylor Fritz, at No. 14 the highest-ranked American man, agreed.

“Traveling every week. Never being home. The pressure of the rankings,” he said. “Everyone’s different, so I feel like I’m a laid-back, easygoing person and not a lot of things really bother me, but I definitely understand that it is an extremely mentally draining sport.”

Osaka was not the first to broach this.

But her place of prominence, as a four-time Grand Slam champion and former No. 1-ranked player, and her decisions to withdraw from Roland Garros, to explain why and to take two mental health breaks last season resonated widely.

“Anytime an athlete shares their vulnerability and their authenticity, it’s going to affect other athletes in that sport. There’s a relatability,” said Becky Ahlgren Bedics, the vice president of mental health and wellness for the WTA. “So I don’t know that I would attribute it necessarily to one person or one event, but … that makes other folks sit up and notice and kind of say, ‘Well, maybe I should pursue something along those lines, too .’”

Paola Badosa, a 24-year-old from Spain who won Tuesday, has not shied away from talking about her own anxiety.

“All of us are humans. All of us have to deal with all of these mental struggles. We struggle,” Badosa said. “And it’s important that players like her talk about it.”

Another more recent example: 2019 US Open champion Bianca Andreescu, a 21-year-old Canadian set to face Olympic gold medalist Belinda Bencic in Paris on Wednesday, announced in December she would sit out the start of this season, including the Australian Open, so she could “re-set, recover, and grow” after two difficult years.

“Definitely more and more players are speaking out on it or about it. Some are even taking time off to regroup and be away from the noise. There is, for sure, a lot of noise, especially when you’re in the spotlight or win big tournaments and there is a lot of pressure to back it up,” said another Canadian player, 23-year-old Denis Shapovalov, at Wimbledon semifinalist last year. “With social media now, it’s not an easy era. And one key is that you kind of have to know whose voice is important and whose voice you don’t need to focus on.”

Before Roland Garros last year, Osaka said she didn’t intend to speak to the media. After her first-round victory, she was fined $15,000 for skipping a mandatory news conference (a requirement that has not changed at the French Open or other major championships) and threatened by the four Grand Slam tournaments with further punishment if she did so again.

Instead, Osaka pulled out of the event, revealed what she had been going through for years and opted to take time away from tennis.

“I think everybody was surprised and was not ready for that,” said Kildine Chevalier, who was hired in October as the French tennis federation’s manager of player services and relations.

“It’s important now we take into consideration those problems,” said Chevalier, a former pro player who has not worked previously in the area of ​​mental health, “not to repeat a similar situation and to prevent (it) instead of acting when it’s already here.”

According to Chevalier, new amenities for players at this French Open include an 850-square-foot room in the main stadium with 11 beds and noise-reducing headphones, a yoga room with daily workshops on meditation and breathing, a tea room, a nail salon and telephone hotlines to reach out to psychologists or psychiatrists.

That is separate from what the men’s and women’s tours offer, such as a member of the WTA mental health and wellness team who is on-site at Roland Garros. Chevalier said that her office is near her, “So I see players coming all day long. … She is working a lot.”

Those meetings have been available for years on the women’s tour, but Ahlgren Bedics estimated there has been a 30% increase in sessions for WTA players over the initial months of 2022, compared to the first quarter of 2021.

“That’s a pretty significant jump,” she said. “If an athlete wants to pop in for 10 minutes and say, ‘I’m really frustrated the way practice went today and I just need to vent,’ that could be a 10-minute thing. Or the exact same symptoms could be 90 minutes. It really is up to the athlete as to how much they want to share and kind of what they want to accomplish in their time with us.”

Rebecca Marino, a former top-40 player from Canada, left the tour for nearly five years because of depression but is back now and earned her first French Open berth since 2011 by getting through qualifying rounds. She notices a difference in the way mental health is discussed these days — in tennis, yes, but also across society — and said she has “a lot of praise” for the way the WTA approaches the matter.

“People didn’t really understand what I was going through with my mental health and why I was stepping away from the sport,” Marino said. “Now we have a lot more athletes who are discussing the importance of mental health in their careers. It’s really opened up the conversation to a lot more people and it’s created more positive conversation, which I think is really wonderful and I’m glad that’s starting to happen.”

Still, Frances Tiafoe, a 24-year-old from Maryland who considers Osaka a close friend, noted there is work to be done to make people realize they should talk about mental health problems.

“Sometimes, you don’t want to get vulnerable with each other,” he said Tuesday after winning a French Open match for the first time. “If you complain, then you’re called ‘soft.’ But when you think about it, you’re actually strong. Sometimes people really are going through a lot on the inside, but they hide it and try to put up a facade like they’re super tough. Sometimes you just need to verbalize it. You need a safe space to be heard. With Naomi, she was going through some stuff at that moment.”

Osaka, a 23-year-old who was born in Japan and now lives in the United States, has remained a part of the conversation in a public way, whether merely by letting people know she speaks to a therapist or by becoming an investor with a role of chief community health advocate for Modern Health, which calls itself a “global workplace mental health and wellness platform.”

She records meditations the company is making available to the public, and CEO and founder Alyson Watson said Osaka “can play such a big role in destigmatizing mental health” and “really pave the way, not only for athletes, but for other people, to speak up about struggling, as well.”

In her email to The AP, Osaka wrote about keeping quiet about her feelings growing up, about moving past that and, with regard to her 2021 French Open, added: “This year, I am in a different state, for sure.”

On Tuesday night, a day after exiting the tournament, osaka tweeted: “These past few weeks in Europe have been a real character test but I’m glad I came. … I’m leaving with a completely different emotion than the previous one.”