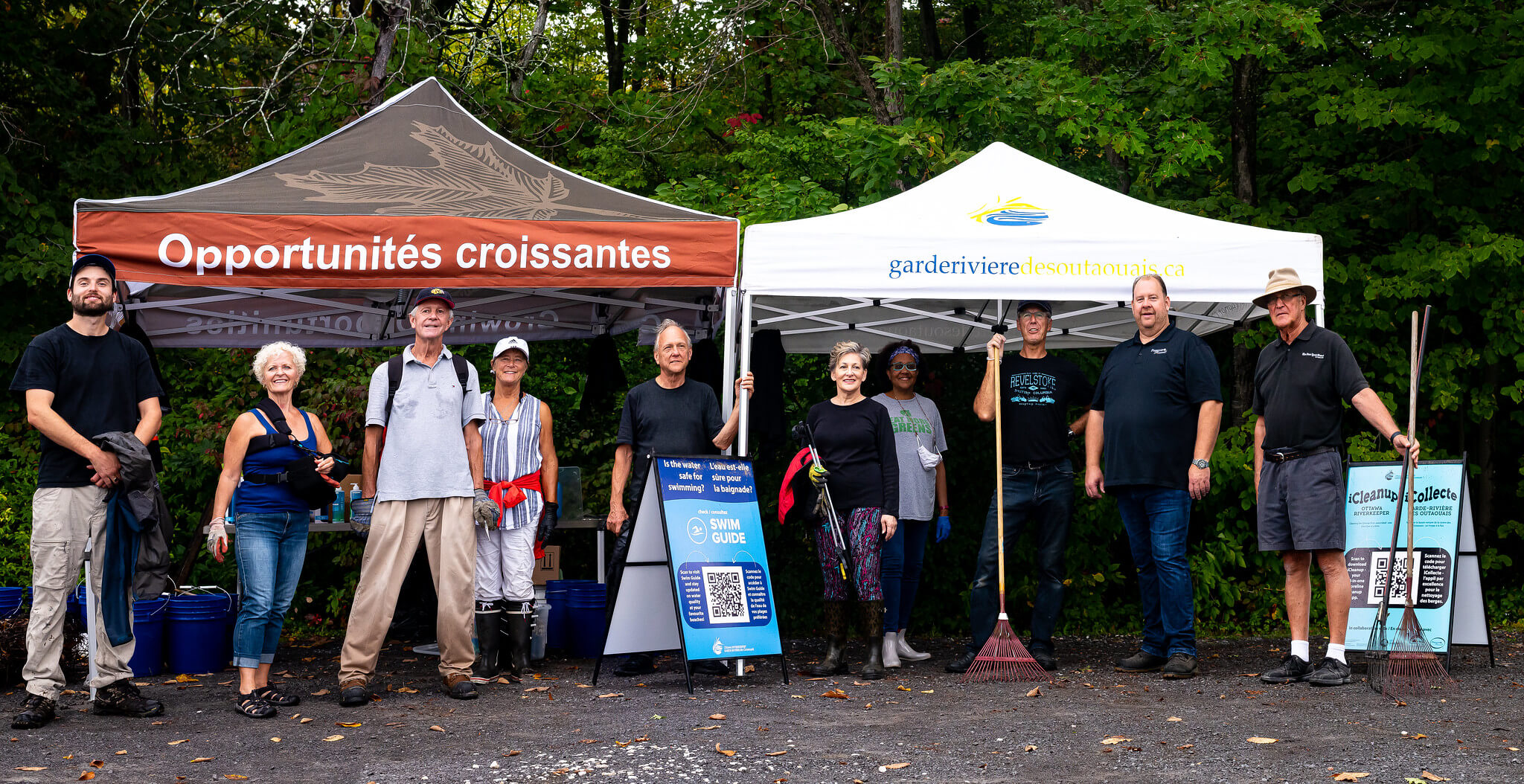 Ottawa – April 25th2022. Ottawa Riverkeeper and the regions of the Pacte d’Amitie, MRC de Papineau, MRC d’Argenteuil, and the United Counties of Prescott and Russell, are pleased to unveil plans for another summer of cleanup events across the three regions. These events follow successful cleanups held in 2021 and are a continuation of an innovative partnership between the three regions, which encompass both the Ontario and Quebec sides of the Ottawa River, and the Ottawa Riverkeeper.

The first event is slated to take place on May 8th at 9:30 am, and will be a cleanup of Doran Park in Casselman. Three subsequent cleanups are planned for the weekend of June 11th and 12th. These include a 9:00 am cleanup of the Parc National de Plaisance on June 11tha 9:30 am cleanup of the Côte de l’abattoir in Hawkesbury on June 12th, and later that day, at 1:30 pm a cleanup in Saint-André-d’Argenteuil. More details on these cleanups, how to participate, the exact locations, and plans for additional cleanups will be released soon by Ottawa Riverkeeper and the Pacte d’Amitie.

In 2021, with support from the Pacte d’AmitieOttawa Riverkeeper hosted four cleanups across the three regions, which are highlighted in a recently-released video.

Shoreline cleanups are a great way to keep our river banks clean and protect our ecosystems. But perhaps more importantly, they are a means to get communities thinking about their shorelines, their waterways, and how their actions impact the environment around them. Events like these instill a desire to take action and help build communities that will care for, protect, and steward their rivers, creeks, and streams.

In 2019, the three regions of the Pacte d’Amitie signed an agreement to take up the cause of protecting the river that runs through and between their communities. The governments of Argenteuil, Papineau, and Prescott and Russell partnered with the Ottawa Riverkeeper to engage their citizens in protecting and caring for the river that runs through and between these regions. This cross-border, watershed-conscious collaboration is exactly the kind of endeavor that Ottawa Riverkeeper loves to see and acts as an inspiration to residents and governments in all parts of the watershed.

It was this desire for watershed-wide collaboration that led us to develop, in partnership with the Pacte d’Amitie and Environment and Climate Change Canada, a shoreline cleanup tracking app called iCleanup. The app allows anyone doing shoreline cleanups in the watershed to record their results within the app and contribute to a watershed-wide total of trash collected. We hope that this collaborative effort, inspired by the cross-border collaboration of the regions of the Pacte d’Amitiewill encourage people throughout the Ottawa River watershed to work together to steward and protect this incredible and beautiful river that runs through all our communities.

Ottawa Riverkeeper, a charitable organization, is a champion and collective voice for the Ottawa River watershed, providing leadership and inspiration to protect, promote and improve its ecological health and future. Expert and independent, our organization advocates for responsible and participatory decision-making, public education, access to information, and compliance with protective regulations. Guided by a science-based approach, we provide clear information with the aim to engage the public and empower citizens and decision-makers to ensure clean, healthy, and accessible water for all people and species.