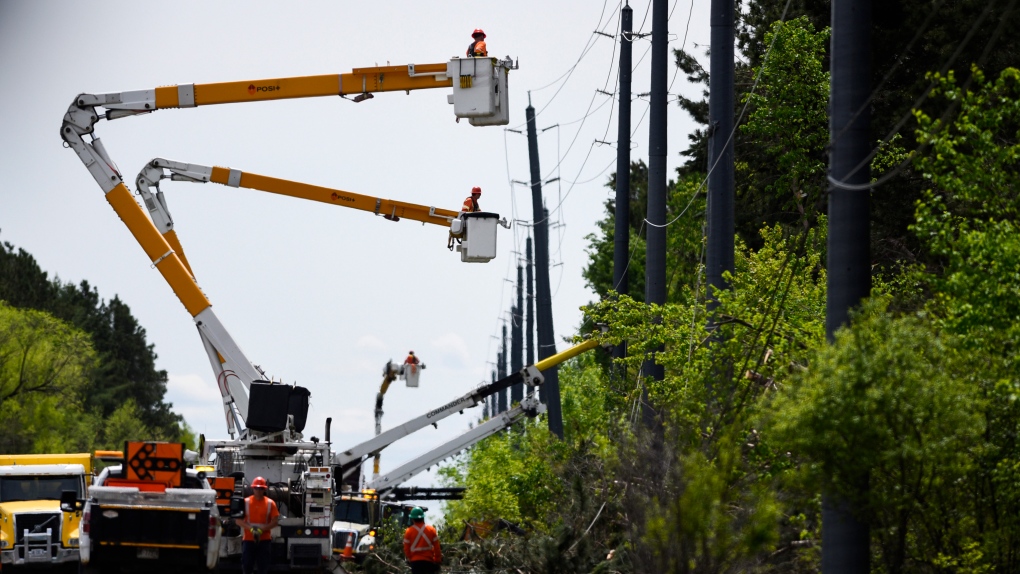 City officials in Ottawa say it could be another two to three days to restore power, but Hydro Ottawa is assuring the community that progress is being made.

Hydro Ottawa reported more than 74,000 still without power as of 5 pm Tuesday, Crews have restored power to 106,000 customers to power in the last three days.

“Restoration efforts will continue 24/7 until all residents are reconnected,” Hydro Ottawa’s Joseph Muglia said in a media conference Tuesday afternoon.

Muglia once again stressed that the amount of damage done to Ottawa’s power grid was worse than the 1998 ice storm or the 2018 tornadoes.

“By comparison, 80 hydro poles needed replacing after the tornadoes in 2018. For this event, we are almost three times that amount in damage to poles. This level of infrastructure replacement would commonly require about six months worth of time to complete. We’ re performing it within a matter of days,” he said.

Hydro Ottawa has removed its outage map temporarily, saying it doesn’t reflect the current situation and the full extent of crews’ progress “due to the number of individual and complex overlapping outages.”

“Given the number of separate events and the extent of damage to electrical equipment, this continues to be a multi-day restoration effort,” Hydro Ottawa said in a news release. “After critical institutions and emergency services, power restoration work is prioritized to outages affecting large neighborhoods with the largest number of customers, followed by smaller areas.”

Muglia said as soon as Hydro Ottawa is in a position to begin offering estimated restoration times to individual neighbourhoods, it would do so.

Hydro crews from New Brunswick are on the ground helping Ottawa workers. Workers from Toronto and Kingston have also been called in.

Approximately 40 roads are still impassable due to downed trees and hydro lines, Public Works General Manager Alain Gonthier told reporters Tuesday afternoon. Residents are being asked to stay off the roads if they can.

OC Transpo is reporting some detoured buses, but the transit system is largely intact.

Respite centers are open from 10 am to 10 pm daily for people who need electricity, water, food and shelter. You can see a full list here. There are also disposal bins set up at several locations for spoiled food, and the city is conducting a green bin blitz to collect food waste. Many city services were closed on Tuesday.

English public and Catholic schools in Ottawa will reopen Wednesday if they have power. There are more than 60 schools in the city that still don’t have power and they will remain closed. In addition, two schools were damaged by the storm and will be closed for an extended period of time. French boards plan to open schools that have power, as well.

Three large towers along Highway 417 were downed during Saturday’s storm. The westbound exit to Hunt Club Road is closed and will remain so for the next few days. Hydro One, which supplies the electricity for Ottawa and many parts of Ontario, is working to rebuild the nearly 50-metre tall hydro lines which carry power from Cornwall and across to the Ottawa Valley.

“This is the major extent of our damage on the transmission system. The bulk of the damage is on our distribution system, as it has been for other utilities in the province. So, very, very significant effort to restore power at this point,” says Jason Fitzsimmons, chief corporate affairs and customer care officer for Hydro One. “Importantly, the supply to Ottawa is not dependent on this line right now, but it is one of 14 major lines to feed the city of Ottawa.”

At least nine people across Ontario were killed in the destructive storm on Saturday, including three in the Ottawa area.

Mayor Jim Watson said Tuesday morning the cost of the cleanup will run into the millions of dollars, including the cost of bringing in hundreds of employees in on a long weekend, reimbursing other jurisdictions for their resources and running the respite centers.

“We don’t have an estimate at this point,” he told CTV Morning Live on Tuesday. “But we’re not in the business of penny-pinching during an emergency like this. We have to make sure that we get as many resources as quickly as possible to help people, because their lives have been turned upside-down.”

A city council meeting scheduled for Wednesday has been cancelled.