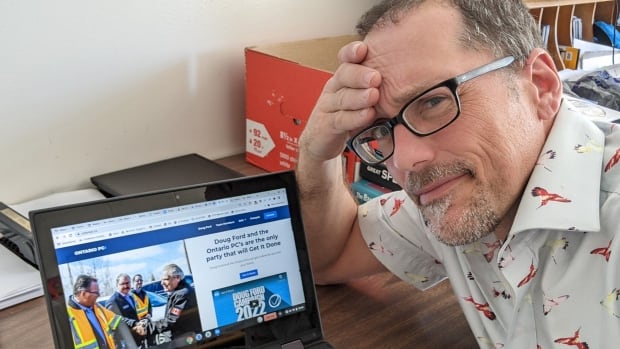 A Canterbury High School literary arts and civics teacher has had it with the errant apostrophe on the front page of the Progressive Conservative (PC) Party’s website, so he’s raising money to donate to an education foundation in party leader Doug Ford’s name.

What AJ Blauer really wants to do is buy a bottle of electronic Wite-Out, or perhaps fund the development of such a product. But he’ll settle for the donation to the Education Foundation of Ottawa.

Blauer first noticed the error — “Doug Ford and the Ontario PC’s” — on the first day of the election campaign when he and his civics students were looking up party platforms online.

It should be the plural PCs, not the possessive PC’s.

AJ Blauer, a literary arts and civics teacher at Canterbury High School, says he began a satirical online fundraiser for “electronic Wite-Out” after noticing an error on the Progressive Conservative website.

It has remained there on the main page ever since, he told CBC Radio’s Ottawa Morning on Friday.

Blauer insists his displeasure isn’t political, and that he’d be just as vexed if the Green Party or the Liberals had made the same mistake.

“The misuse of the apostrophe is probably the bane of my literary existence,” Blauer said. “People who use the apostrophe to pluralize dates and acronyms, it drives me crazy. I can’t unsee it.”

“Does Doug Ford think that punctuation grows on trees???????”

(How will Blauer react to the missing apostrophe in the previous sentence? Our guess: not joyfully.)

AJ Blauer is a stickler for using apostrophes correctly. So when he saw that the Ontario PC party’s website had an extraneous apostrophe, he sprung into action. The Ottawa teacher created a GoFundMe called the ‘PC Party Apostrophe Abatement Fund’ to poke a little fun at the grammatical error and to raise money for the Education Foundation of Ottawa at the same time.