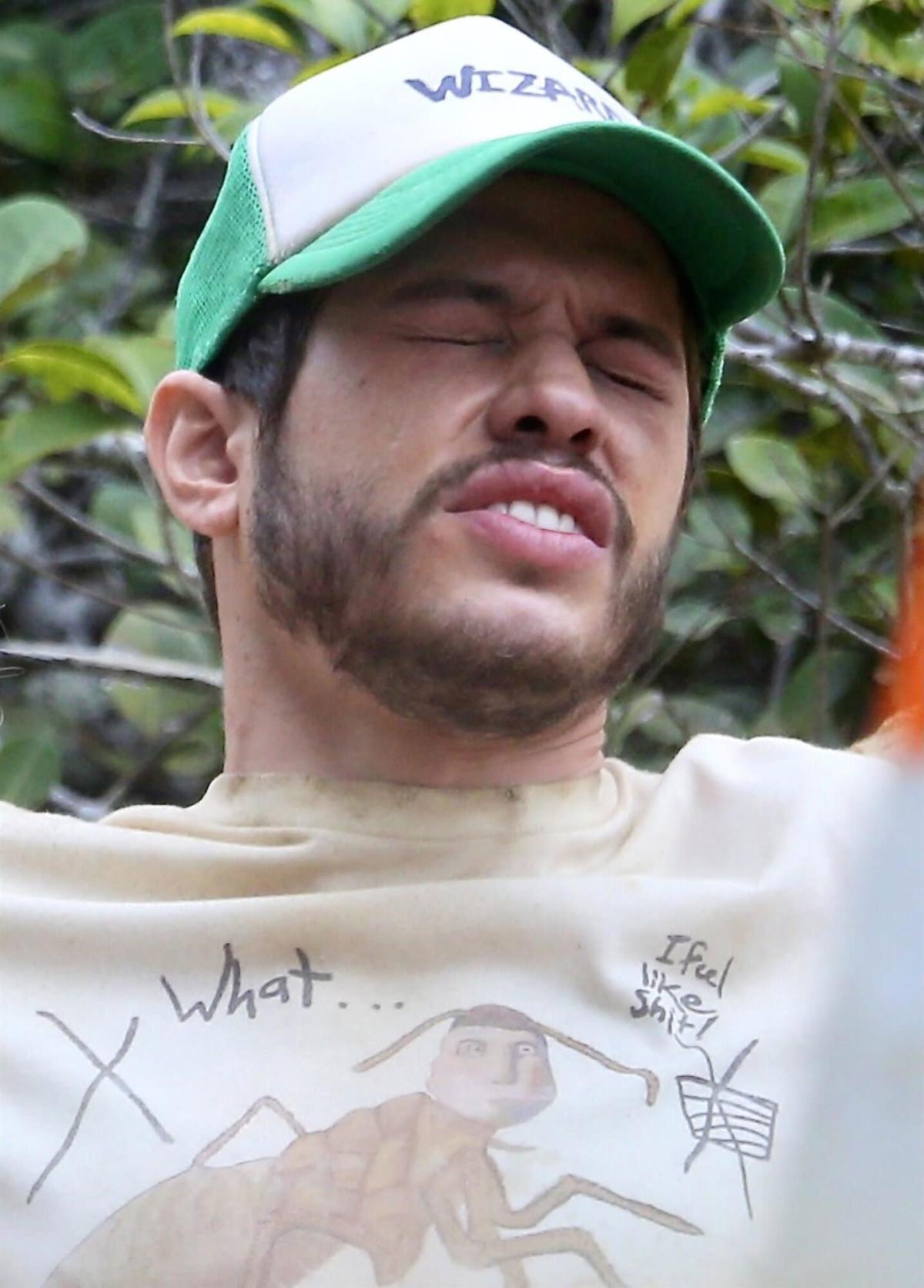 Pete Davidson has been spotted for the first time since news of his split with Kim Kardashian.

The photo shows the former Saturday night Live star, 28, on the set of Wizards! in Cairns, Australia, following his breakup with Kardashian. Davidson is wearing a cap with the movie’s title and a shirt that says, “What… I feel like s—.”

While he may appear upset in the photo, a source tells PEOPLE that he looked happy on the set and was mingling with the cast and crew, adding that there was “no indication” he was sad.

The comedian and Kardashian, 41, who were first romantically linked in October 2021, ended their relationship this week, a source told PEOPLE on Friday.

“Part of the reason they split was because of their busy schedules,” an insider said. “They both travel all the time and it was hard.”

AND! News was the first to report news of their breakup.

Representatives for both stars did not immediately respond to PEOPLE’s request for comment.

Kardashian and the comedian first connected as they shared an onscreen kiss for a sketch during the SKIMS mogul’s SNL hosting debut on Oct. 9, 2021.

Kardashian later recalled the moment on Amanda Hirsch’s Not Skinny But Not Fat podcast in April 2022. “When we kissed, I was just like, ‘Hmm!’ It was a stage kiss, but it was still like, a little zing. It wasn’t anything like a super-crazy feeling. I was just like, ‘Hmm,’ and then I was like, ‘Wow, I really haven’ t kissed anyone else in 10 years, so maybe I’m just like being stupid and it’s just nothing and it’s just a stage kiss,'” she said at the time.

The duo then made headlines when they were spotted holding hands on a rollercoaster at Knott’s Scary Farm in Buena Park, California, in October 2021, as seen in exclusive photos obtained by PEOPLE.

The two continued to spend time together after the Halloween time outing, including when Kardashian traveled to Davidson’s native Staten Island, New York, to have dinner at Campania, an Italian restaurant, the next month.

The pair were again spotted out the following weekend in Palm Springs, holding hands and smiling, and continued to stay close in the weeks to follow, even kicking off the New Year with a short trip to the Bahamas.

RELATED: Pete Davidson Wants His Future Kids to Grow Up with Their Dad and ‘Watch Them Have What I Didn’t’

Then, in February of this year, Davidson opened up about living life in the spotlight and hanging with “girlfriend” Kardashian during a chat with Kay Adams, host of PEOPLE (The TV Show!).

“Well, I don’t really have Instagram — I don’t have Instagram or Twitter or any of that stuff. So, most of my daily life is getting into cars and showing up to a set,” the comedian said.

“Or, if I’m off, I just either hang with my friends or chill with my girlfriend inside. So I don’t do much,” he continued, referring to Kardashian with the title publicly for the first time.

The couple later made their Instagram debut on March 11, with Kardashian sharing two photos of Davidson.

Kardashian and Davidson also showed up to the 2022 Met Gala for a starry date night. Though Kardashian’s choice of her to wear Marilyn Monroe’s dress might have been controversial, her evening of her with Davidson was nothing but smooth sailing, with her date of her showering her with affection and helping her navigate the Metropolitan Museum of Art’s famous steps in her formfitting gown.

Kardashian and Davidson’s relationship marked the first for the kardashians star after her split from Kanye West. Together, Kardashian and West share daughters North, 9, and Chicago, 4, as well as sons Saint, 6, and Psalm, 3.

Never miss a story — sign up for PEOPLE’s free daily newsletter to stay up-to-date on the best of what PEOPLE has to offer, from juicy celebrity news to compelling human interest stories.

The mom of four filed for divorce from West, 45, in February 2021. A source previously told PEOPLE that Davidson was “exactly what Kim needed after her divorce.”

“Someone to make her laugh and just have a fun time with,” the source said at the time. “The end of her marriage for her was a very dark time for her for her and Pete has been the best antidote.”