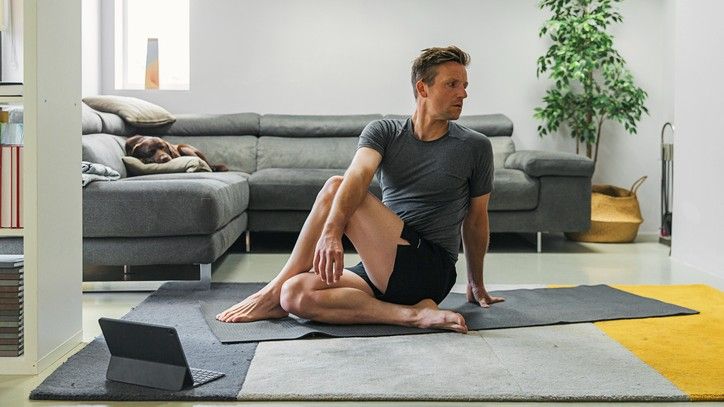 Pilates vs yoga: Which should you practice and why? Pilates is usually practiced to build strength or rehabilitate after an injury, whereas yoga is good for flexibility (if you’re wondering, “What does stretching do to your body? (opens in new tab)“, read our feature to find out more). But there’s some overlap between the health benefits of the two different disciplines. For example, yoga has been found to build muscle strength, particularly in the ‘trunk’ area of ​​the body, while Pilates has been shown to improve hamstring flexibility.

Before you start trying either practice on one of the best yoga mats (opens in new tab), it’s a good idea to read up on how they compare. Here’s what the latest research says.

There is evidence to suggest that both yoga and Pilates can improve flexibility.

A long review, published in the Muscles Ligaments Tendons Journal (opens in new tab), rounded up plenty of evidence showing Pilates increases flexibility. One study (opens in new tab) referenced in the review measured the fingertip-to-floor distance of Pilates participants and found that this improved over a six-month period.

But Yoga has also been proven to increase flexibility. A 2016 study by the International Journal of Yoga (opens in new tab) followed college athletes over a period of 10 weeks. There were two groups; one that had biweekly yoga sessions and a control group that did no yoga activity. There were significant differences in the flexibility of the group that attended biweekly yoga sessions whereas there were no significant differences in the group that did no yoga activity.

So it appears Pilates and yoga can help improve flexibility (opens in new tab), though yoga may have the added bonus. Most of the studies on Pilates uncovered that there was a difference in the hamstring flexibility of the participants whereas with yoga, it appears there may be an increase in whole body flexibility.

When you think of strength building, Pilates seems like the most obvious choice compared with yoga. You wouldn’t be wrong. Pilates is designed to build core strength, working on the abdominal muscles, as well as strengthening and toning other muscle groups.

Another study, in the Journal of Strength and Conditioning Research (opens in new tab), found that the participants were able to do significantly more sit-ups and push-ups than the control group subjects, who had not practiced Pilates. It was also found that the Pilates training group were able to lower their legs closer to zero degrees without lifting their lower spine off a flat surface. This indicates greater abdominal strength was gained through the practice of Pilates. The same study demonstrated that in active middle-aged men and women practicing Pilates for 12 weeks doing two 60-minute sessions a week was enough to see significant increases in abdominal endurance.

But yoga isn’t without its strength-gaining benefits. A study in the journal Evidence-Based Complementary and Alternative Medicine (opens in new tab) significant demonstrated improvements in muscular strength and flexibility in men and women who practiced yoga compared with the control group.

Unlike with Pilates, the strength you can build through yoga depends on the type of yoga you do. In order to build muscular strength, you need to create resistance to tense and strengthen the muscles. Some more rigorous forms of yoga can achieve this, such as Ashtanga or Hatha, however forms of yoga like Yin and Restorative will not strengthen or tone your body. Therefore, if you’re looking for an exercise that helps you build strength, Pilates may have the edge.

It’s not unusual to hear that yoga has many more benefits than just physical fitness. It’s well known to help people with stress and anxiety. The International Journal of Yoga (opens in new tab) found that practicing yoga and meditation as a means to manage acute and chronic stress can help individuals overcome comorbidities associated with diseases and leads to an improved quality of life.

This study also found that a regular yoga practice positively affected people’s ability to fall asleep. They found that less time was taken to fall asleep and there was an increase in the number of hours they slept for. Participants also reported feeling more rested in the morning. Pilates, on the other hand, has yet to be fully researched into its effects on mental health.

When it comes to exercising, sometimes we are trying to find something that helps our body heal after an injury. We may think a gentle exercise like yoga may suit us or perhaps we want to be more active and build strength so Pilates may be more appealing. What can either do to help the rehabilitation process?

The Clinical Biomechanics (opens in new tab) study concluded that a lack of abdominal strength and upper spine posture can lead to problems in the neck and shoulder region and therefore, as Pilates works directly on building strength in these areas, it argued it would support the use of Pilates in the prevention of neck and shoulder disorders.

However, this is a preventive measure. What about after an injury?

Lower back pain is a common injury and can cause people all sorts of problems. There is not sufficient scientific evidence to support or oppose the use of Pilates as a treatment for diagnoses such as lower back pain. A study published in the Journal of Orthopedic & Sports Physical Therapy (opens in new tab) sought to determine the effectiveness of utilizing Pilates as a therapeutic exercise approach for chronic lower back pain. The subjects participated in a four-week program on Pilates equipment. They noted significantly lower levels of functional disability and average pain intensity after the weeks of Pilates.

Interestingly, this study also found that individuals in the specific-exercise-training group reported a significant decrease in chronic lower back pain and disability and this was maintained over a 12-month follow-up period. This study concluded that treatment with a modified Pilates-based approach could be more effective than consultations with physicians, specialists and other healthcare professionals.

Pilates may focus on physical rehabilitation through the means of strengthening the body but yoga’s approach to rehabilitation is different. Yoga has been shown to be an effective treatment for lower back pain. There have been many studies that indicate that yoga postures, meditation or a combination of the two can reduce pain and disability and that it can also increase flexibility and mobility in people with a number of conditions causing chronic pain.

Most people think that in order to lose weight you need to do exercise like running. Studies have found that Pilates and yoga can help you lose weight but the way they do it is different.

A study published in Preventive Medicine (opens in new tab) found that after participation in Pilates for four weeks, there was a significant reduction in the participants’ BMI percentiles. Another study from Research Quarterly for Exercise and Sport (opens in new tab)which investigated the responses of adult beginner practitioners of Pilates after an eight-week mat Pilates program, found that there was reduced relative body fat and circumferences at the waist, chest and arm.

These results could be due to the strength being bulky during a regular Pilates practice. Yoga, however, has a different approach to losing weight.

The findings from an Evidence-Based Complementary and Alternative Medicine (opens in new tab) study imply that yoga could offer diverse behavioral, physical and psychosocial effects that may make it a useful tool for weight loss. The same study concluded that the role modeling and social support supplied by the yoga community may also contribute to weight loss, particularly for those individuals who have struggled to lose weight.

The National Center for Complementary and Integrative Health (opens in new tab) shared that 63% of adults who practiced yoga report that it makes them exercise more regularly. This alone can be a big factor in keeping someone healthy and losing weight. Yoga may be the building block to building healthier habits, leading to weight loss through other means.