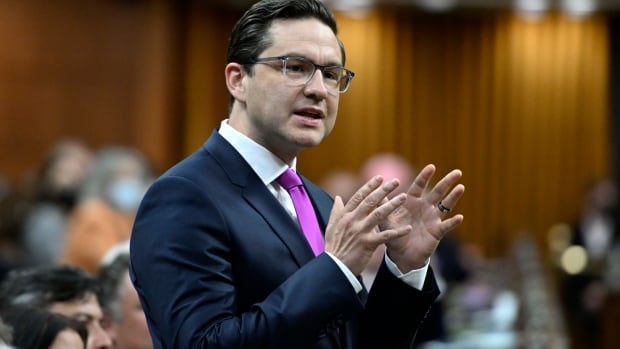 Conservative leadership contender Pierre Poilievre said Wednesday, if elected, he’d introduce new legislation that would force the federal government to offset every dollar of new spending with a cut to something else — a program he’s calling a “pay-as-you-go “approach to budgeting.

Poilievre’s plan is to essentially cap federal spending so it doesn’t go much higher than it is now. The legislation, if passed, would require the government to find money for new measures within existing budgets, rather than increasing the debt and taxes to cover new costs.

The Conservative MP’s campaign said there would be exemptions for spending related to “national emergencies like wars, pandemics and natural disasters.” It also said “spending increases that were previously budgeted” like the annual increase to the Canada Health Transfer and increases to military spending would be exempt.

As it stands, the Poilievre campaign said, there’s “no incentive for anyone in government to root out failing or wasteful programs.”

“Under pay-as-you-go, ministers would not be able to introduce new programs without getting rid of old ones, they would need to scour for waste that would otherwise go on robbing taxpayers into perpetuity,” the campaign said in a backgrounder sent to reporters.

Poilievre has blamed the Liberal government’s big-spending budgets for inflation — a charge the government has rejected, saying the COVID-19 pandemic and the war in Ukraine are largely to blame for recent price spikes.

Canada’s inflation rate has been rising fast. According to data released by Statistics Canada on Wednesday, the overall inflation rate hit 7.7 per cent in May — a surge driven in large part by a massive uptick in the price of gasoline over the last year.

The government has defended its COVID-related spending, saying it helped the country avoid economic ruin during the worst of the pandemic.

Poilievre said many families and businesses already follow a pay-as-you-go approach when drawing up their budgets and so too should the federal government.

“When they spend more on one thing, they spend less on another. A family budget can afford a $2,000 vacation or a $2,000 renovation. Not both. They must pick,” Poilievre said.

Kevin Page, the former parliamentary budget officer (PBO), and an expert on federal fiscal matters, said it’s difficult to compare government spending to what Canadians do every month with their own checkbooks.

The fiscal firepower of the federal government just doesn’t compare to the average Canadian household, he said.

He said any pay-as-you-go program should be flexible to account for changes in the economy — and there should be carve outs for spending on capital goods, like major infrastructure projects, because they represent “returns that are much larger for future generations.”

“Many economists are generally concerned about deficit bias in governments and so are heartened to hear about spending rules,” Page said, referring to the tendency of governments to allow deficit and public debt levels to continually increase.

“It is a good thing that Conservative leaders are presenting ideas on fiscal responsibility,” he said.

The US Congress has had a pay-as-you-go approach to budgeting at different times over the last three decades. The program was successful in the 1990s as the US eliminated its deficit after pursuing a combination of tax hikes and spending cuts.

But the rule has regularly been ignored by legislators with Republicans pushing through tax cuts without offsets and the Democrats introducing new social programs without changes to other so-called “entitlement” programs like pensions and health care for the elderly.