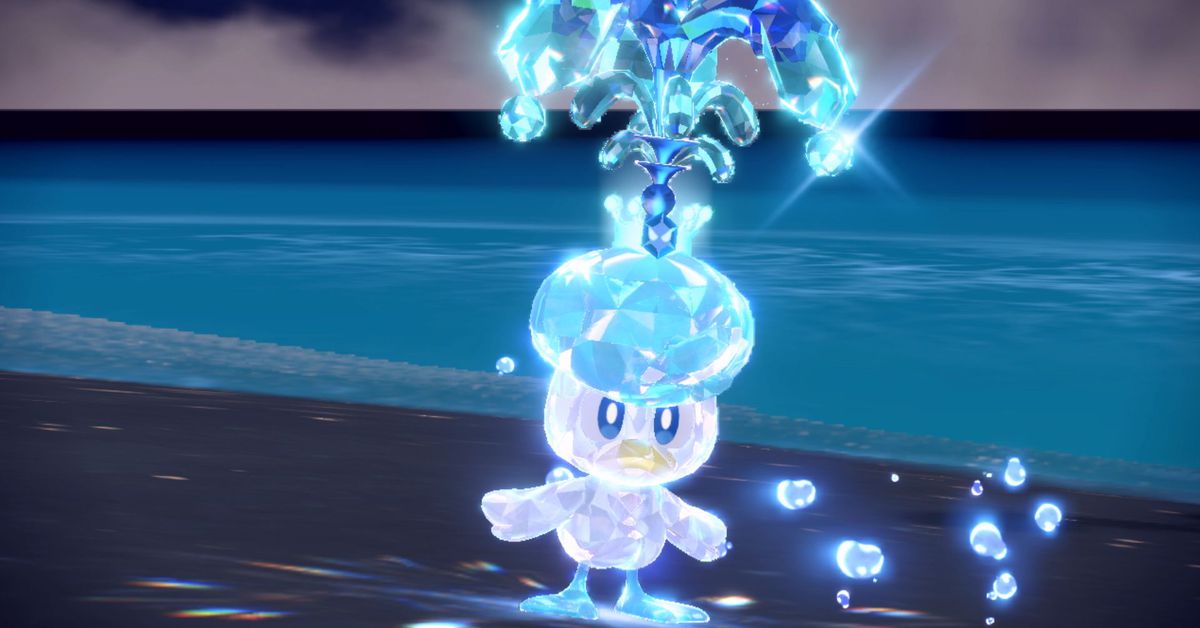 pokemon scarlet and violet got a new trailer on Wednesday, which revealed more about what our journeys in the Paldea region will look like. The trailer showed off adorable new Pokémon like Fidough and Paldean Wooper, but also new special blinged-out forms called Terastal Pokémon. While the flashy new mechanic might seem like just another gimmick, like Dynamax or Alpha variants, it could be a game changer for competitive battlers and Pokémon collectors alike.

With the Terastal Phenomenon, a Pokémon can transform into a bedazzled version of itself with a neat jewel-like hat styled like objects including flowers and balloons. Terastallizing also “provides a boost to a Pokémon’s type and make its moves stronger,” developers said in the video, and each individual Pokémon capable of the transformation will have a unique Terastal power that can change its elemental type. We don’t know which specific Pokémon will get which Terastal powers, but the trailer showed off a few specific examples, including Pikachu changing from electric type to flying type, and Eevees turning both water and grass type after Terastallizing.

The change will likely create waves in the competitive Pokémon community. You might be facing a Pokémon like Pikachu whose type you’ve known your entire life, but the Terastal Phenomenon casts its type into question, leaving you guessing if the matchup you’ve chosen is strong or weak against your opponent.

The Terastal Phenomenon will likely also impact Pokémon collecting. With 18 types in total, the addition of new forms creates an astronomically large roster of possible Pokémon combinations for enthusiasts to chase after. A Shiny hunter, a kind of Pokémon fan who chases after the special, rare Shiny forms of Pokémon, might decide to chase after not just regular Eevee and shiny Eevee, but also all the shiny forms of the water-type and grass-type Terastral forms of Eevee as well.

In the trailer, developers explained that trainers will be able to get rarer Terastral Pokémon by doing Tera Raid Battles. But this mechanic potentially requires collectors to commit to an immense amount of grind. Unless there are other ways of catching these rare Terastal Pokémon, Tera Raid Battles could mean being stuck with seemingly endless drudgery in order to catch a full set of Shiny Terastral forms. While this new feature is fun and inventive, it will also likely keep people hooked on more repetitive elements of the game. Of course, the most dedicated collectors already grind for weeks and months to catch a rare Pokémon.

There’s no one way to enjoy a Pokémon game, and the addition of a new form — even if it might require extra grinding — gives collectors something new to chase after. There’s a lot of potential with Terastral forms. While mechanics like this one are nothing new — the first set of games to introduce a battle mechanic like this was pokemon x and Y with Mega Evolution — the gimmick feels unique because it impacts two long-running elements of the fandom: battling and collecting. It’s genuinely cool to see a game mechanic that appears to speak to the collecting side of the community. I’m looking forward to seeing these delightful, sparkling Pokémon when pokemon scarlet and violet come out later this year.