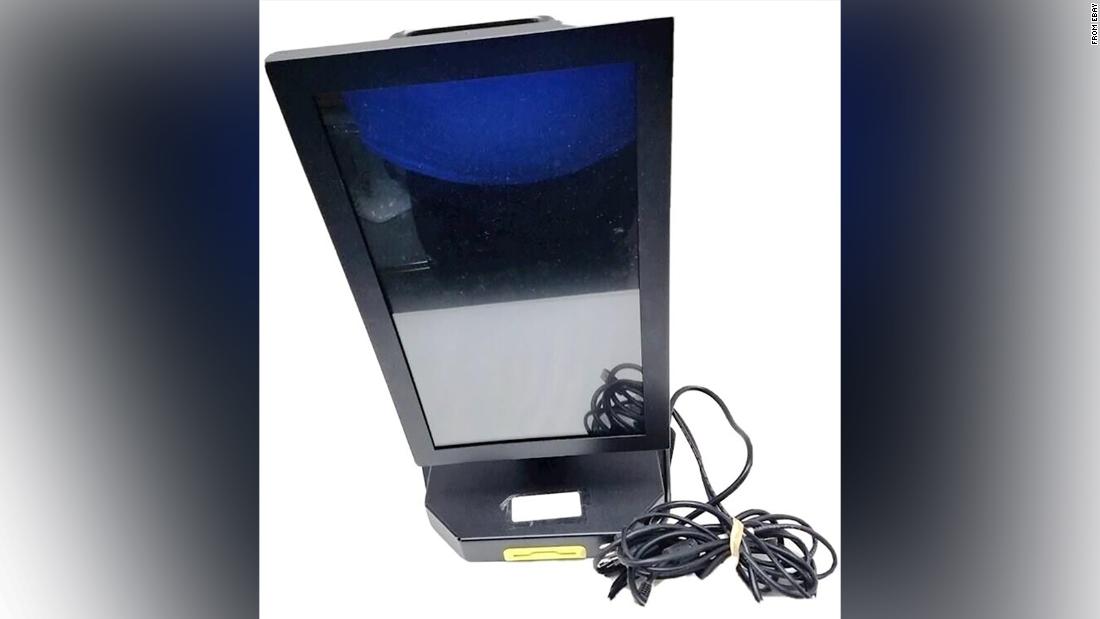 The machine was purchased by a cybersecurity expert in Connecticut who alerted Michigan authorities and is now waiting for law enforcement to pick up the device. CNN determined the machine was dropped off at a Goodwill store in Northern Michigan, before being sold last month on eBay by a man in Ohio.

In an interview with CNN, the Ohio man said he purchased the machine online at Goodwill for $7.99 before auctioning it on eBay for $1,200.

Michigan’s Democratic attorney general has called for a special prosecutor to investigate her Republican challenger, Matthew DePerno, after finding evidence that allegedly links him to a plot to tamper with voting machines used in the 2020 election. DePerno has denied the allegations.

A bargain at the Goodwill

Ean Hutchison, a 35-year-old Uber driver in Miamisburg, Ohio, has an eye for technology and a stellar record as a seller on eBay. He trawls the web looking for deals on computer parts, like motherboards and graphic cards, and then re-sells them for a profit on eBay, often to similarly technically inclined people who are building or upgrading their own computers.

“I have a knack for finding hidden gems really cheap and turning a quick profit,” Hutchison said, and often finds those gems in online thrift stores and Goodwill.

It was on a recent trawl of a Goodwill website in Michigan that Hutchison said he came across one of those gems.

“AVALUE TECHNOLOGY Touch Panel SID-15V-Z37-B1R,” was all the ad read. The pictures accompanying the ad showed a large monitor, possibly a touch screen, with what looked like a slot for a keycard or credit card. A hand-written sticker on the base of the monitor reads “Colfax.” Goodwill was selling it for $7.99.

To the uninitiated, it would be hard to know what this product was. A monitor that maybe could plug into a computer, perhaps. But why the slot for a card?

Hutchison knew what he was looking at.

It was a piece of election hardware that, he reasoned given where it was listed, had been used in Michigan’s elections.

“I wasn’t even aware that they were supposed to be sold, let alone donated to Goodwill,” Hutchison told CNN.

“The sale of voting machines and related equipment is prohibited under eBay’s government items policy,” an eBay spokesperson told CNN. “We will cooperate with law enforcement in their investigation.”

“Own a piece of history!”

The machine — a ballot-marking device — arrived in the mail and Hutchison later posted it on eBay. He set the eBay auction bidding to start at $250 but gave potential buyers the option of skipping the auction if they paid $1,200 upfront.

“Own a piece of history!” Hutchison’s eBay listing read. “This voting machine was one of thousands used in the 2020 United States presidential election and included in one of the many lawsuits against Dominion that were thrown out.”

Dominion Voting Systems was the subject of baseless claims after the 2020 election that its voting machines were hacked as part of a plot to throw the election in favor of President Joe Biden. Dominion is currently engaged in a billion-dollar defamation suit against a handful of defendants, including Fox News, who amplified baseless claims its machines were hacked in the 2020 election.

Seven hundred miles away, in his apartment in Connecticut, Harri Hursti saw the ad.

Hursti is regarded as one of the foremost election machine security experts and organizes an event every August in Las Vegas where hackers are given access to voting machines in a bid to identify and remedy potential vulnerabilities. As a result, Hursti has become essentially a voting machine collector — but the machines he can normally buy are old and retired.

This ad was unusual, Hursti said, because it claimed to sell a device that he thought might still be in use in Michigan.

Hursti bought the machine outright for $1,200. After it was delivered to his home last week, he contacted the Michigan secretary of state’s office which oversees elections in the state. He says he was instructed not to open the box the machine came in, to preserve it for law enforcement who may need to wipe it for fingerprints.

A few days later, an official from the secretary of state’s office emailed Hursti. “Thank you again for bringing this to our attention,” the email read. “We have determined this device originated in one of our jurisdictions. The jurisdiction has now reported the device to law enforcement as stolen.”

It’s unclear how the voting machine ultimately ended up at Goodwill. It was delivered to Goodwill Northern Michigan’s e-commerce division from a Goodwill location in Cadillac, Michigan, to a Goodwill spokesperson told CNN. Goodwill said in a statement that its team members process thousands of donations a week in Northern Michigan and that they are cooperating with authorities on the investigation of the device.

The clerk for Wexford County, which covers Cadillac and includes a town called Colfax, like the label on the machine in question, told CNN Thursday she was searching for answers.

“I am just as concerned, if not more so,” said Clerk Alaina Nyman when asked about security concerns expressed by state officials.

The clerk of Colfax Township, Becky Stoddard, declined to comment on the device specifically, citing an ongoing police investigation, though she said she keeps election equipment locked up and added that she does not believe conspiracy theories about Dominion voting machines.

“I’ve never had any trouble with anything,” said Stoddard, who said she has served as a clerk for 22 years.

In some states, voting machines might only be in use a couple of days a year, or every other year. But their secure storage is crucial to ensuring integrity in America’s elections. This can be a challenge given the decentralized nature of voting systems in this country.

In Michigan, for instance, there are more than 1,500 different voting jurisdictions across 83 counties, each with its own clerk who is responsible for the security of its voting machines, according to the secretary of state’s office.

Jocelyn Benson, Michigan’s secretary of state, told CNN in an interview in Detroit on Thursday that voters should rest assured that the state’s elections are secure.

She said her team contacted law enforcement as soon as they learned about the machine on eBay, and she also pointed out that there are multiple checks of machines both before and after Election Day to ensure accurate results.

That’s a point that was echoed by Hursti, who tries to find vulnerabilities in election systems for a living.

He told CNN that while the appearance of a Michigan voting machine on eBay raises concerns about how machines are stored, the real threat is what election conspiracy theorists could do.

Over the past two years, people trying to prove the false claim the 2020 election was stolen have sought or gained unauthorized access to election systems.

Michigan State Police have been investigating a series of voting machine breaches that occurred last year in multiple counties in the state.

“What you really have is individuals who don’t seem to understand the technicalities of the elections process or election security trying to gain access to machines to keep the misinformation alive,” Benson said.

As for the machine that showed up at the Goodwill, how it got there is a mystery police are trying to solve — as of Thursday evening, Hursti still had this piece of critical infrastructure in his home, waiting for someone to pick it up.

This story has been updated with additional reaction.