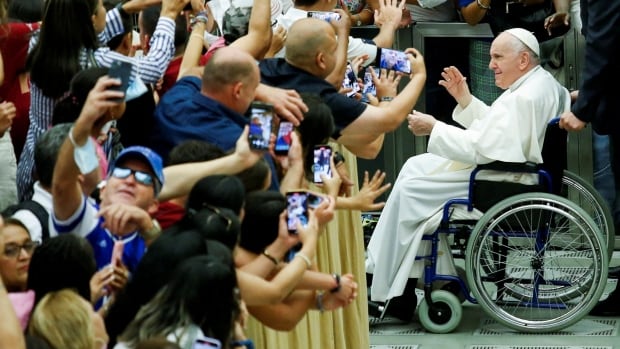 Pope Francis said on Wednesday he felt the pain of survivors of Canada’s residential school system and he asked for “forgiveness in the name of the church” for the role many of its members played in abusing children and attempting to erase Indigenous cultures.

The pope dedicated his talk at his weekly general audience to his trip last week to Canada, where he delivered a historic apology for the church’s role in the government-sanctioned schools, which operated between 1870 and 1996.

More than 150,000 Indigenous children were separated from their families and brought to residential schools. Catholic religious orders ran most of them under successive Canadian governments’ policy of assimilation.

The children were beaten for speaking their own languages ​​and many were sexually abused in a system Canada’s Truth and Reconciliation Commission called “cultural genocide.”

The Pope met Indigenous survivors throughout the trip, and on the last day mostly elderly school survivors in Iqaluit told him their stories in a private meeting.

“The last meeting with the Inuit, with the young and the elderly, how they felt the pain not knowing where their children had been taken [due to] these assimilation policies; it was a very painful moment to be there, “Pope Francis said, according to his translator of him. “We need to give face to our errors and our sins.”

During the trip, the Pope’s apologies evoked strong emotions and praise as a first step in reconciliation, but some survivors said they fell short of expectations and that he had not apologized clearly enough for the church as an institution.

WATCH | How the Pope’s visit to Canada unfolded in 11 minutes:

How the Pope’s visit to Canada unfolded in 11 minutes

In an apparent attempt to answer the critics, he said on Wednesday that priests, nuns and lay Catholics had “participated in programs that today we understand are unacceptable and contrary to the Gospel. That is why I went to ask forgiveness in the name of the church.”

Some were also heartened when the Pope, speaking to reporters on the plane taking him back to Rome on Saturday, branded what happened at the schools as “genocide.”

Francis, who is suffering from a knee ailment, walked some 20 meters to his seat on the stage of the Vatican’s audience hall using a cane and at the end remained standing to greet some participants. He later used a wheelchair when aides moved him among the crowd.

He mostly used a wheelchair during the trip to Canada, including during his in-flight news conference on the return flight.