We’re profiling cool kids doing cool things.
Know someone you think should be profiled on our site?
Email us at [email protected] and tell us what makes them so awesome.

Max Du knows how to build a robot.

In fact, this spring, he won the Canada-Wide Science Fair with his first-ever submission.

Max won the platinum award in his age category (Grade 9 to 10) for “innovation” at the national competition on May 20.

His project, titled “A Novel Pre-Hospital Indoor Rescue Drone,” is a high-tech surveillance drone designed to save people who go into cardiac arrest. 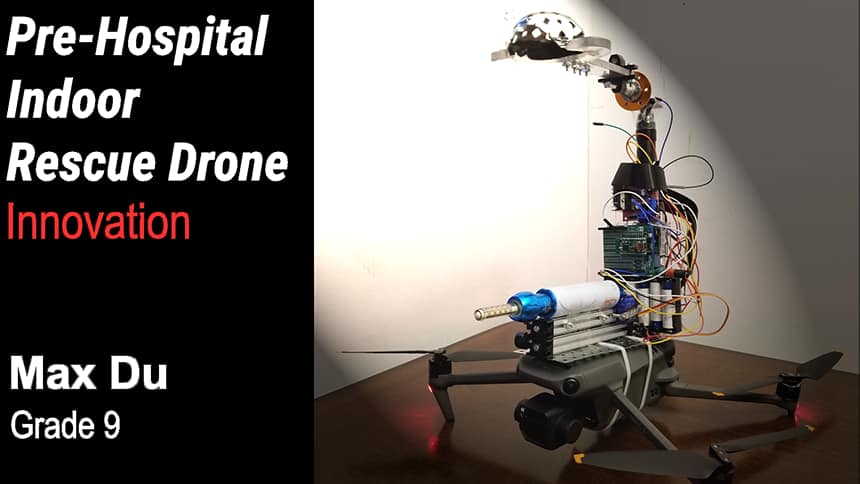 Max spent six months testing his prototype, which cost $2,500 to produce. He did it with support from his parents of him and #RisingYouth, an organization that helps fund community service projects created by young people.

How Max first got the idea

Max got a burst of inspiration during Christmas break last year.

“I got a toy drone from my parents, but I couldn’t fly it because Calgary is really snowy,” Max said in an interview with CBC Kids News.

“So I started fooling around with it at home, and it got me thinking how a drone could be used as an indoor robot that could help people.”

Max began to think of people with severe heart conditions who are at risk of having a fatal heart attack before an ambulance can arrive.

According to the Heart and Stroke Foundation, about 35,000 people have cardiac arrests in Canada each year. The organization says that most of those happen outside of a hospital.

In this short clip from Max’s science fair video, his prototype easily flies up the stairs to help someone having a life-threatening cardiac arrest. (Image submitted by Max Du/Youth Science Canada)

Of those who have an out-of-hospital cardiac arrest, fewer than 10 per cent survive.

Max believed a drone could offer faster support and life-saving medication, but he had to build it himself to know for sure.

The painstaking process of testing his prototype took about six months. Max’s parents had to deal with their son constantly flying — and crashing — different models in the home.

Every time Max would create an exciting innovation, such as an extendable arm that could administer a needle, it would add extra weight to his drone, causing it to crash and break apart.

Then Max would have to buy all new parts and start over.

Max tested his prototype exhaustively, changing the equilibrium point in his robotics coding of the contraption and using more lightweight materials until his design was more balanced.

In this short clip from Max’s science project video, Max shows how his bulky design made it difficult for his drone to lift off, left, versus how it flew after he re-designed his prototype, shown on the right. (Image submitted by Max Du/Youth Science Canada)

He also had to be resourceful and use what he had to keep the costs down, borrowing his mom’s selfie stick to create an arm system, his dad’s camping air pump to test out a design idea and his sister’s dental flossing kit to create a medication pillbox .

Through trial and error, and by talking to his advisors from the FIRST Tech Challenge (a robotics competition Max attended in 2021), the 14-year-old finally got it right.

His new drone can now grip a door handle, open it, hover in the air and then land softly on the ground.

A new extendable arm can be released to administer a shot or hand a patient life-saving medication.

A built-in surveillance camera could directly conference with an emergency response team whose members could monitor the patient remotely.

Max wanted to design an extendable arm for his drone that could also open doors to help people experiencing a severe heart condition. (Image submitted by Max Du/Youth Science Canada)

His science teacher encouraged him to apply to an Alberta-wide science fair. When his project won a top prize, Max qualified for the Canada-Wide Science Fair — and the rest is history.

Could Max’s drone be made for real patients?

Max now plans on applying for a patent — an official document that shows that you have legal ownership over your invention — so he can make connections in the health-care industry to get it made for real.

“I just want to keep improving it,” he said.

He’s spent his summer so far learning about artificial intelligence at California’s Stanford University’s AI4ALL program as one of 32 kids selected worldwide.

He’ll head next to the University of Pennsylvania to take a college-level robotics class before returning to high school in September.

He’s also studying to get his drone pilot license, so he can finally put his Christmas present to good use.

“After I get my license, I can get permits to fly it in cool places like Banff,” said Max.

“I can’t wait to take some cool drone shots!”

﻿﻿Have more questions? Want to tell us how we’re doing? Use the “send us feedback” link below. ⬇️⬇️⬇️