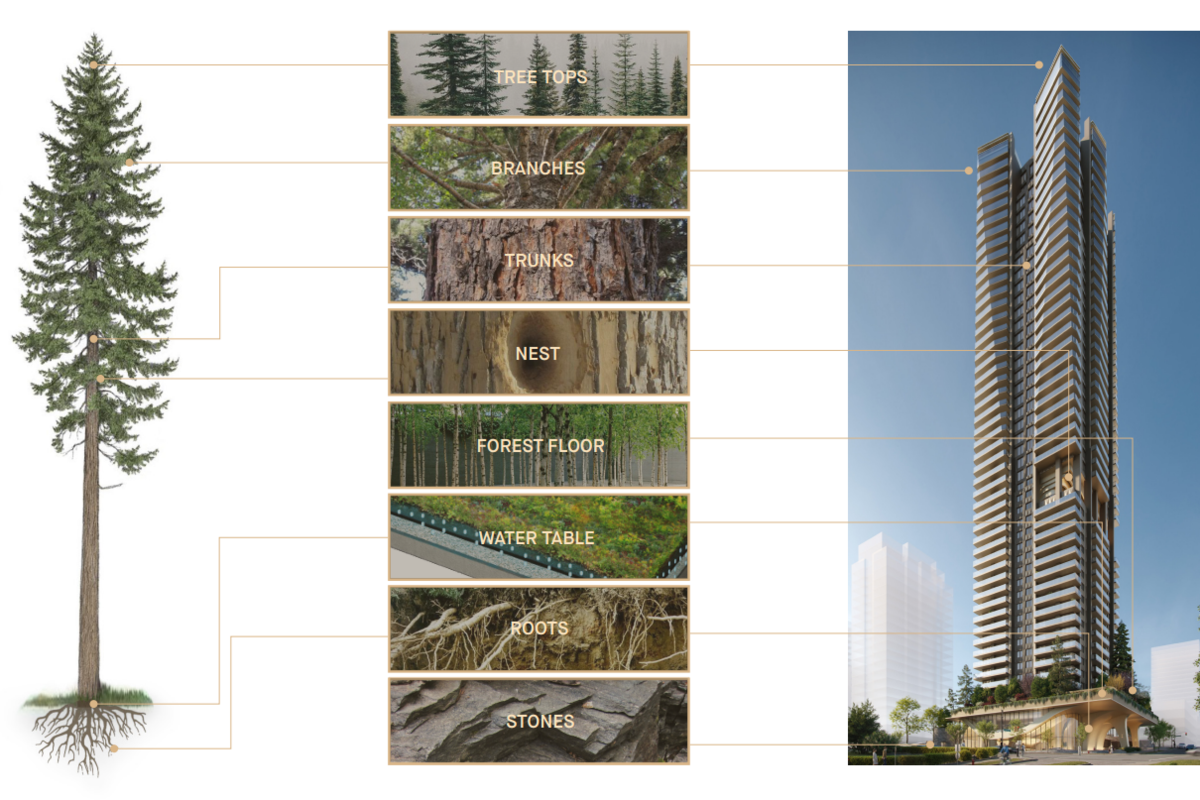 The Douglas fir is one of the iconic plants of the region.

The massive trees are some of the largest living things on Earth, so it’s maybe not a surprise they’re the inspiration for the design of a proposed tower in downtown Vancouver, where the trees once stood. In this case, the 150-meter tall tower is substantially taller than its 100-meter tall inspiration (though some are rumored to hit 120 m in Metro Vancouver before being cut down a century ago).

“Our local fir trees provide us with an ideal model of sustainability. They have evolved over time relying only on our local environment to produce specimens hundreds of feet all,” say the developers behind the proposed tower at 1450 West Georgia St.

The address was rezoned for a huge tower in 2018, but a new design has been proposed for the 49-story residential tower guided by the different components of Douglas firs, including the roots, forest floor and nests. In this case the roots are at street level, while the forest floor is the top of the tower’s podium, where a park-like green space will be created with small trees and other plants. To really drive it home, the outside of the building is even proposed to be bark-like brown.

“While the design has evolved considerably since rezoning, the changes are refinements that better reflect the tower as tree concept,” note the architects.

The new tower is proposed the Georgian Tower property, which includes residences, a parking lot a couple of commercial spaces. Wesgroup, one of the proponents of the new tower, owns the current 22-storey apartment tower. BC Assessment notes the structure, built in 1955, has 162 units. It estimates the building to be worth around $520,000, while the land is valued at $95.7 million.

At the ground level, amongst the “roots” there would be a covered plaza with commercial space. The proposal also includes a large, engraved “Welcome to Friendly Vancouver” as a node to a former sign at the Georgian Tower.

If it were standing today it would be among the 10 tallest towers in Vancouver.