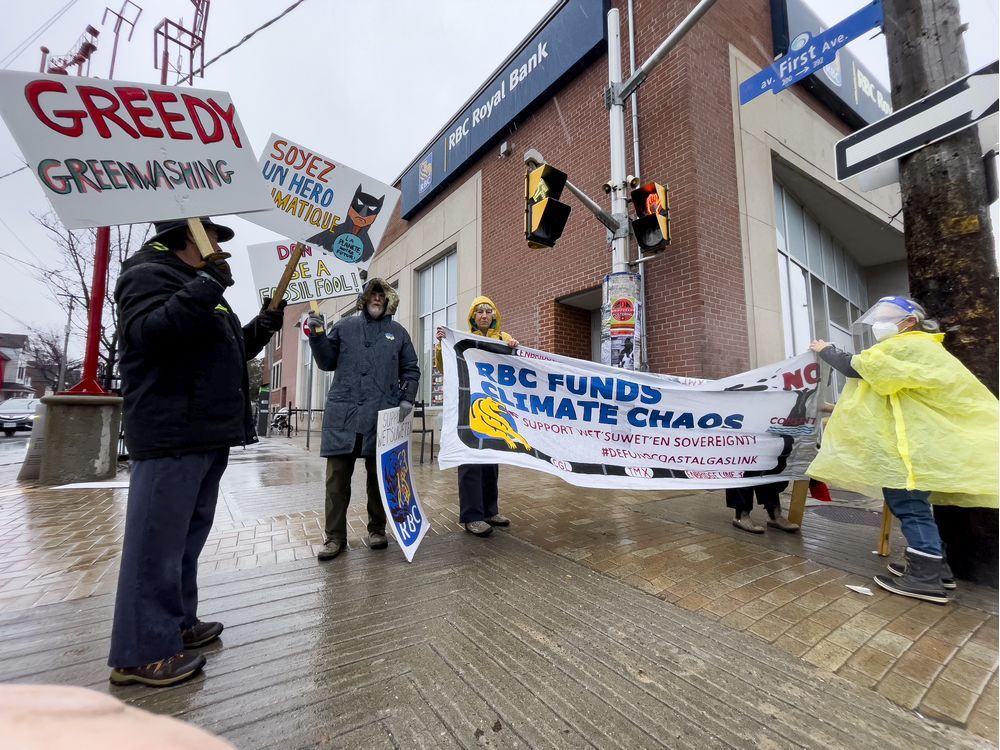 Protesters in Ottawa were among those rallying in a national day of action on the climate crisis and Indigenous rights targeting RBC for investing in fossil fuel projects like the Coastal GasLink on Wet’suwet’en territory in British Columbia.

Organizers said protesters planned to gather at three RBC branches Thursday, the day of the bank’s annual general meeting for shareholders, starting with a location on Bank Street in the Glebe.

A later protest was slated to be led by Decolonial Solidarity on Rideau Street in the ByWard Market at mid day and Orléans Green Party members were to meet at a branch on St. Joseph Boulevard in the afternoon, according to a news release.

Pressure is growing to hold financial institutions accountable for their role in the climate crisis, organizers said. They called on RBC to stop investing in fossil fuel projects, including any existing project and those that “violate the free, prior, and informed consent of Indigenous people and nations.”

“Parents want to know that when we are investing our money, it will be to build a better future for our kids,” said For Our Kids Ottawa/Gatineau co-founder Dr. Marianne Ariganello in the release. “We need financial institutions who are serious about putting the future of our planet and our children first. It’s honestly the best long-term plan for any investment.

“But in 2021 alone, RBC, Scotiabank, TD, BMO and CIBC together poured $131 billion into industries that are the leading cause of global warming and climate disruption, and into projects like Coastal GasLink pipeline that violate the rights and lives of Indigenous Peoples. ”

Organizer Sara Washburn said that the Intergovernmental Panel on Climate Change report released this week makes it “painfully clear — we need to reduce green-house gas emissions by nearly half by the end of this decade or the consequences will be devastating.