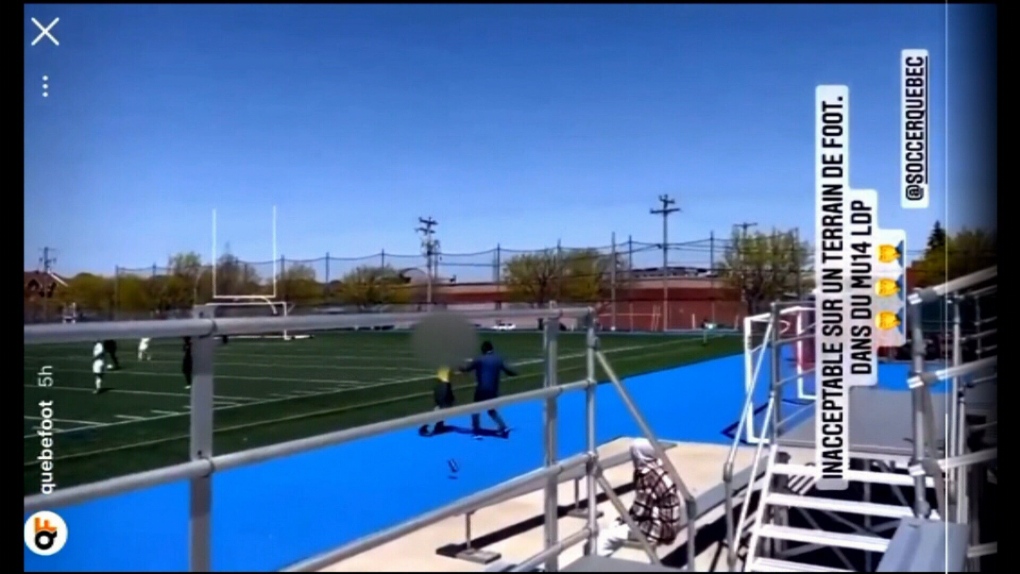 Quebec’s soccer leaders are condemning an assault, captured on video, on a teenage referee by an adult who came onto the field to physically confront him.

“A video that has been circulating on social media since last weekend shows an underage assistant referee being attacked by an adult coming down from the stands to confront him,” said Soccer Quebec in a statement Monday.

“We strongly denounce this act of violence which has no place anywhere, and even less on a soccer field.”

They didn’t say where the attack took place, but the video was posted to Twitter from a soccer reporting site and was described as taking place in Dollard-des-Ormeaux, a suburb west of Montreal.

The video shows a boy, reportedly 17 years old, in a yellow and black referee uniform, standing on the sidelines of a soccer pitch as an adult man steps onto the field, argues with him and quickly throws a punch to his head.

The boy pushes back, trying to defend himself, and they tussle as people rush to try to pull the man, said to be a parent of one of the players, away.

The boy was refereeing two under-14 teams at the time, said Soccer Quebec, and the attack forced a premature end to the match.

The organization’s general manager said there is “zero tolerance” for violence towards referees, not to mention ones who are still teens themselves.

“What was important for us in the first place was to make sure that the young referee was doing well in the circumstances and that he was well surrounded,” said general manager Mathieu Chamberland.

“But I unreservedly denounce this aggression and I remind you that there is no reason, really no reason, which justifies the attack of an officer.”

The incident won’t necessarily end there. Montreal police said Monday they haven’t yet gotten a complaint about it, but that they’re looking into it.

Soccer Quebec is following up, it said, and wants to speak to people who witnessed the event.

“The situation was reported to the competent authorities,” it said. “On our side, checks are in progress to activate our mechanisms in matters of discipline.”

Even the provincial minister responsible for sports got involved on Monday. Minister Isabelle Charest, once an Olympic speedskater, wrote on Twitter that it was “unacceptable.”

“Instead of attacking the referees, we should instead encourage them,” she wrote. “I call on all parents, let’s all be ambassadors of sportsmanship, violence is unacceptable, period!”

Soccer Quebec’s director of refereeing, Nathanël de Wilde, added that referees are “part of the game” and that people need to keep that in mind even more so when they’re young people “who are learning,” saying that young referees “need the support and encouragement of the population.”

This is a developing story that will be updated.

–With files from CTV’s Ian Wood