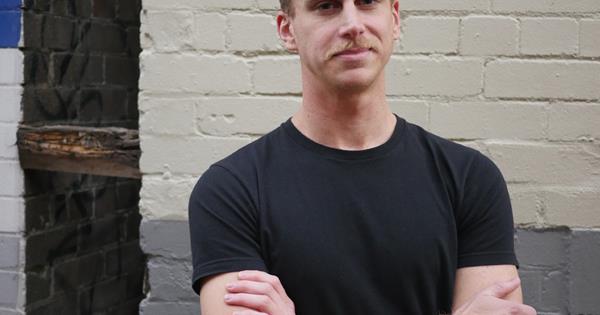 The Old Fitz, one of Sydney’s most beloved pubs, has developed a reputation for incubating some of the best chef talent in Australia. One notable alumnus is Nik Hill, who now runs the excellent Porcine in Paddington. The current head chef, Anna Ugarte-Carral, is an award-winning chef who’s worked in the kitchens of some of the world’s best restaurants. With Ugarte-Carral finishing up her time at the Old Fitz, another young gun, Toby Stansfield, is stepping up to lead the kitchen.

What did you do before taking this job?

I opened Fabbrica Pasta Shop with the guys from Ragazzi [as head chef]. I was running that, built that up from scratch, and then our wholesale and retail needs exceeded our space, so I helped them open their production kitchen, which I’ve been doing for the last six to eight months.

What kind of food do you like to cook?

What are you looking forward to doing in this new role?

I want to bring the nostalgia: things I was having when I was growing up and was really accustomed to, and things you see in everyday places, like bakeries or bistros. But making it more fun, rather than maybe the stock-standard. For instance, I really want to put a rooster roll on the menu instead of maybe a burger or something. To me, that’s a really kitschy thing that I love to play with. To make like a premium rooster roll would be pretty fun and exciting thing to play with, I think. And just like, Australian classics like a vanilla slice, but making it my own. Basically just playing with nostalgia is really what I want to be doing. There’ll be a bit of a Euro influence, but mostly I’ll be trying to hit that Australian thing.

What can we expect from the menu?

I’m going to keep it pretty light where I can. I’m definitely going to keep a few pub classics on there – with my own twists on them. I’m also always going to have a pasta – probably hand-made – on the menu. I’m also going to try to use as much Australian produce as I can really. Trying to get my hands on as much local stuff as I can and playing around with it.

How many menus will there be?

There’s three levels at the Old Fitz, and you can eat at all of them. So I’m probably going to run two menus, they’ll overlap a bit, so there’ll be a shorter hands-friendly menu at the bar and then some fun, flirty stuff happening in the bistro. There’ll be some overlapping dishes, though. But the bar menu will be a bit more pub food and then upstairs will be more like something you’d find in a bistro.

And last question, what’s your favorite thing to put in a sandwich?

That is a very good question. Something that I absolutely love putting in a sandwich is pickle. Like the kind of spreadable pickle that you can buy. You’d usually have it around Christmas-time, all that ham sitting in the fridge. You make a sandwich – pickle is the one go-to. It’s bright yellow. I always like the Masterfoods one to be honest, it was just the one in the fridge. It’s like Keens mustard powder or what a Hoover is to a vacuum. So I’ve always got pickles in my fridge. It’s always good when you’re having cured meats or a little veggie sandwich.

Salted chilli is also great. I’ve made it for a long time, I probably got introduced to it at Rockpool actually, it’s just chopped up chillies, brined – I like to brine mine for about a month, which takes out a lot of the heat and gives it a nice season – and then blend it up or chop it up, however you’re feeling on the day, and then spread it on your sandwich.

Toby Stansfield will be taking over The Old Fitz from late June.