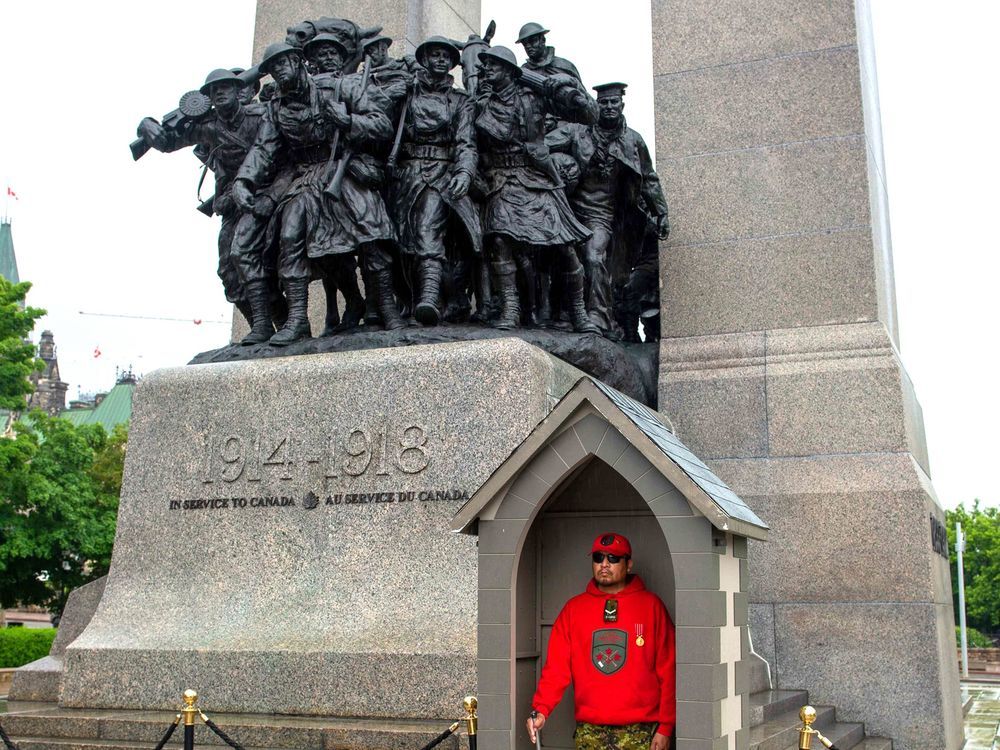 Four Canadian Rangers from remote First Nations in the Far North of Northern Ontario are currently acting as ceremonial sentries at the National War Memorial and Tomb of the Unknown Soldier in Ottawa.

“They like the challenge and they are proud,” said Sgt. Eric Scott, a Canadian Ranger instructor. “They are doing a good job. They will be here until mid-July.”

The National War Memorial is a cenotaph symbolizing the sacrifice of all Canadian Armed Forces personnel who have served Canada in time of war in the cause of peace and freedom. The memorial is the site of the national Remembrance Day ceremony on Nov. 11.

The four Rangers, who are part-time army reservists, are Sgt. Mcleod McKay from Kingfisher Lake, Master Cpl. Ernie O’Kees from Nibinamik, and Rangers Howard Jacob from Webequie and Michael Wabano-Missewance from Eabametoong.

The Rangers take turns standing guard for an hour at a time, along with Rangers from the province of Quebec and members of reserve regiments.

For each Ranger, it is an emotional and rewarding experience.

“I’m enjoying being a guard,” said Ranger Wabano-Missewance. “We get questions from visitors about what we do as Rangers, about where we live in Northern Ontario, and why we are here at the memorial.”

The changing of the guard ceremonies at the National War Memorial attract crowds of local people and visitors to the national capital.

One visitor thought the four Rangers from Northern Ontario were from Nunavut.

In 2014, guarding the memorial, Cpl. Nathan Cirillo, an army reservist with the Argyle and Sutherland Highlanders of Canada regiment in Hamilton, was shot and killed by a gunman who then managed to enter the nearby Center Block Parliament building where he shot and wounded a constable before being shot to death.

— Sgt. Peter Moon is a Ranger with the 3rd Canadian Ranger Patrol Group at Canadian Forces Base Borden