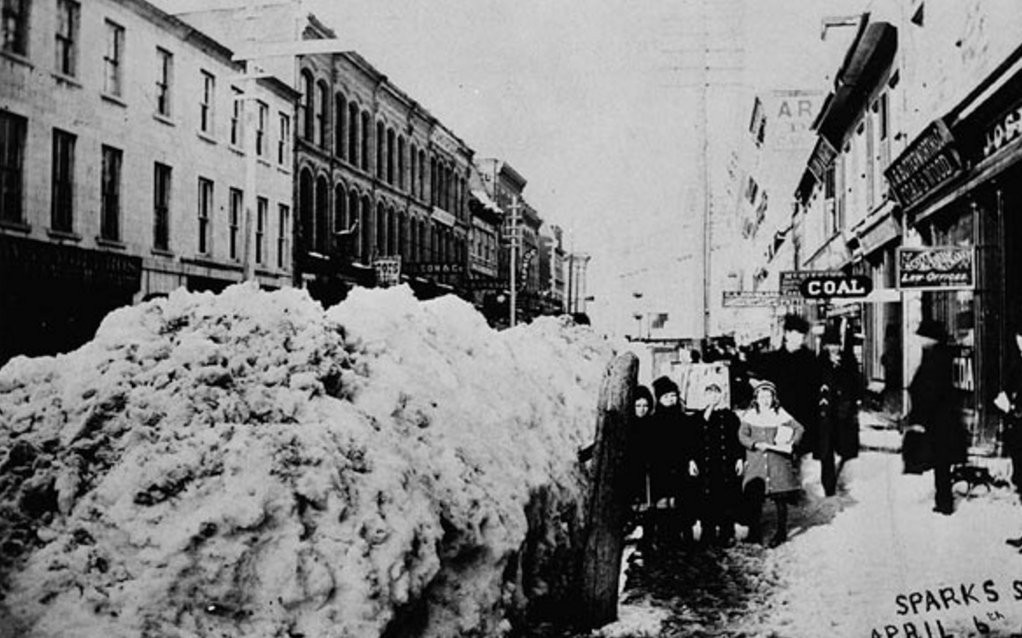 CityNews, in partnership with the Historical Society of Ottawa, brings you this weekly feature by Director James Powell, highlighting a moment in Ottawa’s history.

Ottawa is known for its long, snowy winters. Notwithstanding this, driving conditions are typically good throughout the season. Even through the worst blizzards, the snow plows, salters and sanders are out promptly, keeping Ottawa’s thoroughfares open, and the traffic moving.

While minor, neighborhood streets may not get the same attention, they too are cleared within hours of a major snowfall; sidewalks are also quickly ploughed. And when snowbanks begin to obstruct sightlines and impede traffic, city crews are out to reduce or eliminate them. Specialized equipment, which can eat through the iciest snowbank like a hot knife through butter, throws the snow into the open boxes of awaiting trucks that cart it away to dump sites throughout the city.

So accustomed have we become to good winter driving conditions, there was widespread criticism of a recent City staff recommendation to Council that snow-plough operators wait until ten centimeters of snow had failed before they start clearing roads instead of seven centimeters. Apparently, the City could save $1 million by so doing—a considerable sum, but only a drop out of its snow-clearing budget.

Our forebears would be amazed by the state of Ottawa’s winter roads. Until the late nineteenth century, no roads were plowed. While sidewalks were cleared, typically by store-owners, the snow was simply thrown into the middle of the street. Over time, the road bed could rise four feet or more above the sidewalk level. Wheeled traffic became impossible, and many businesses were forced to suspend operations until the return of warm weather. People got around on foot or by horse-drawn sleigh.

The latter might sound romantic, but city roads quickly became rutted and icy. “Cow holes”—potholes, only larger—became a significant nuisance. Public transit, provided by Ottawa’s street passenger railway, was to be avoided. In summer, its horse-drawn carriages were pulled smoothly along railway tracks from New Edinburgh to LeBreton Flats. Its winter sleigh service was not so comfortable. The Ottawa Journal described progress down Ottawa’s streets as being “painfully slow.” This was not just a figure of speech. Customers were bumped, jostled and jolted as sleighs were dragged in and out of the cow holes. The coming of spring only made things worse. Roads became virtually impassable. Pedestrians were knee-deep in slush. Flooding was a serious risk if clogged drains and ditches were not opened in time.

Things began to improve in 1892 with the arrival of the Ottawa Electric Railway Company (OER) that operated a railed, electric tram service on the main streets of the city. Initially, City Council permitted the company to run sleighs through the winter months; nobody thought trams could operate once the snow arrived. However, Thomas Ahearn, the owner of the OER, employed an electric, rotary snow plow that was fixed to the front of the tram, thereby assuring year-round service.

By the 1920s, a variety of agencies were responsible for snow ploughing in Ottawa. Under the terms of its service contract with the City, the OER ploughed the snow off the 60 miles of streets on which its trams ran, roughly one-third of Ottawa’s 168 miles of roadways. This did not mean, however, that these streets were cleared to the pavement. The OER was required to leave sufficient snow on the roads for sleighs. The Federal District Commission (FDC), the forerunner of the National Capital Commission, also ploughed the Driveways for which it was responsible, while the Federal Department of Public Works cleared snow from the roads on Parliament Hill and on parts of Wellington Street. However, all other Ottawa arteries and side streets, roughly 100 miles, remained unploughed, and quickly became impassable to wheeled traffic.

Fortunately for pedestrians, Ottawa’s Public Works Department took responsibility for clearing 250 miles of city sidewalks using horse-drawn, walkway ploughs at a cost of roughly $30,000 per season. City workers were paid 50 cents an hour, time and a half at night. Ottawa was divided into nine districts, each with a foreman in charge of snow-ploughing operations. Plowing teams were sent out as soon as 4-5 inches of snow had fallen. After a heavy snow fall, or two or more light falls, amounting to 12-15 inches, the walkway ploughs were used to push the snow into the center of the streets where it was flattened by heavy rollers. Heated sand was sometimes used on slippery walks.

As the Roaring Twenties progressed, and the number of automobile owners rose dramatically, Ottawa City Council came under growing pressure to improve winter driving conditions throughout the city. Snow-covered roads increasingly became an economic issue. Retailers worried that customers couldn’t reach them. Grocers complained that their profit margins were too slim for them to own a truck for summer deliveries as well as a horse and sleigh for winter deliveries. City staff also discovered the main arteries along which the OER ran were deteriorating faster than expected, owing to automobile traffic being funneled along those few ploughed roads. Tire chains installed by car owners to improve traction in snow were chewing up the pavement. City Council considered a ban on chains but rejected it as chains were widely used throughout the province. An alternative was to plow the side streets, thereby spreading the automobile traffic, and hence road wear, over more roadways.

In late 1926, the City Council ordered the Public Works Department to try “various measures” to keep Ottawa’s main streets open. Poor Works Commissioner Macallum was reported to have been “quite at a loss” to know what he should do. He had only eighteen, old, horse-drawn walkway ploughs at his disposal. In early 1927, the Council acquired mechanized help in the form three tractors and plows: two Fordson crawler-type tractors, furnished with V-type Sargent plows from Campbell Motor Sales for $2,295, and one 1.5 ton Holt Caterpillar tractor with a Walsh V- type plough from EN & WE Soper for $5,970. Unfortunately, the vehicles didn’t arrive in time to avoid “violent attacks” at City Council over the quality of Ottawa’s streets when warmer weather arrived in March. Councilmen complained that Carling Avenue was in a “disgraceful condition” owing to ruts. Meanwhile, downtown pedestrians were said to be wallowing around in slush up to their knees.

The following winter (1927-28), the City’s newly equipped Public Works Department started to plow twenty-four miles of Ottawa streets adjacent to those cleared by the OER. This still wasn’t adequate. In February 1928, Frank Askwith, the City’s Deputy Commissioner of Public Works submitted a report to the City’s Board of Control, recommending the ploughing of all streets, some 100 miles of roadway, that were not cleared by the OER or the FDC. (As a point of comparison, Ontario ploughed 800 miles of provincial highways during the 1928-29 winter season.) Askwith also recommended the purchase of two high-powered tractor ploughs capable of clearing streets at a speed of 12 miles per hour at a cost of $15,000. He additionally suggested that more “scarifiers” be used to break down ice ridges and reduce even road surfaces. The additional estimated annual cost to the City of his proposal was $25,000. Ask with recommended against removing snowbanks from the streets owing to cost considerations. The Board of Control welcomed the recommendations, and on 16 April 1928, City Council adopted Askwith’s plan to commence that following winter season. The cost of the endeavor was to be borne by property owners at a charge of 30 cents per foot of frontage.

Unfortunately, you can’t please all the people all the time. Sleigh owners complained about insufficient snow being left on the roads. Some property owners also objected to the cost of snow ploughing, preferring their streets to remain unploughed. But most citizens wanted the City to do even more. Retail merchants argued persuasively about the dangers, especially to the elderly, of people trying to alight from parked cars that were perched dangerously on roadside snowbanks. The City consequently began to remove the snowbanks from in front of stores. Permission to dump the snow into the Rideau Canal at a site south of the Laurier Street Bridge was granted by the Superintendent of Canals. The City later began to clear snow in front of all churches as well as in front of residences from which funerals were to take place; district foremen were required to monitor funeral notices.

Ruts too were a perennial source of complaint, as they made winter motoring hazardous. Once a driver got stuck in one, it was almost impossible to get out until the car came to an intersecting channel. For several years, the City and the OER fought over whether the tram company was doing an adequate job of maintaining the roads its carriages used. The tramline company claimed that while it was responsible for the ploughing of snow from the streets on which it operated, it was not responsible for the removal of ruts that might subsequently develop. After a battle of words, the City threatened in 1929 to send a $1,025 bill to the tramline company for rut removal. It desisted when the City’s solicitor said that the contract was sufficiently vague that it was uncertain that the City would win a legal case. Fortunately, harmony was restored when the OER took steps to cut down the ruts to a depth the City considered acceptable.

Ottawa’s first year of cleared streets was deemed a great success. At the end of February 1930, in an editorial titled “The Ruts of Yesteryear,” The Ottawa Journal opined that the nuisance of spring ruts had been finally overcome. “For the first time, motoring has been practicable in all parts of the city for the whole winter.”