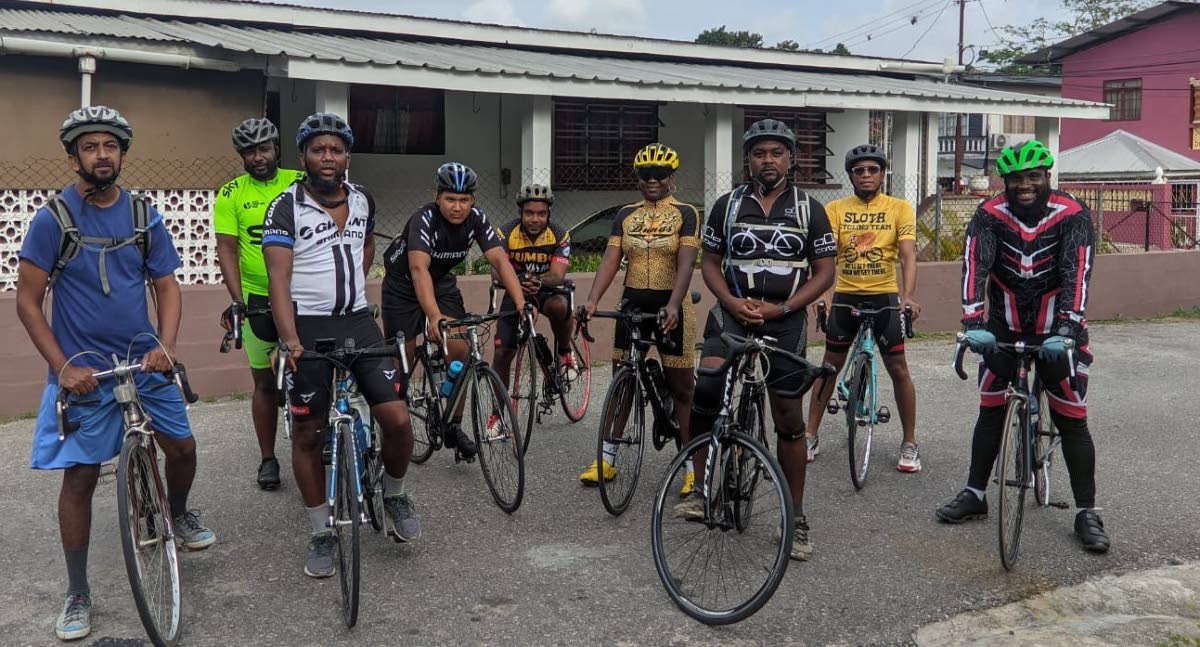 SANGRE GRANDE has a new club in town and they’re keen on developing the community through fun and fitness.

Ride Out cycling club, formed in July 2021, provides an outlet for the people of Sangre Grande and environs to ride recreationally and improve their lifestyle.

Co-founder of the club, Marcell Thomas, spoke with Newsday on Wednesday about the history and goals of the club,

“It began recreationally,” he said. “My neighbor and I started short cycling within the area, and my uncle later took interest and joined us. He was a former cyclist with experience through his Scout group. They used to go on tours around the country.

“Unfortunately, on a ride in 2019, he got a stroke and passed away. That inspired my neighbor and I to form something more solid that would have better measures in place to prevent such incidents in the future.”

He said he was also keen to provide something positive for his nephew, almost a teenager, to take part in.

“There are other clubs in Sangre Grande, but their format is different from ours. Theirs is competitive, ours is more community-based.”

However, Thomas intends to grow the club to become strong enough for competitive cycling and still cater for the recreational riders.

Ride Out is currently not officially registered but already has 30 active members, including members of other clubs sharing their knowledge and ideas. They host both intra- and inter-club events to keep their members active. Last December they held a Champion of the Loop event, which covered a 4.9km circular route around the streets of Grande. It involved other clubs from the area and cyclists were awarded prizes for fastest lap time, youngest cyclist, and Champion of the Loop – the rider who completed the most laps in 30 minutes.

“This event was not under the (Trinidad and Tobago Cycling) Federation,” said Thomas, “it was not possible as we would have had to be a registered club and pay subscriptions for them to cover insurance. But we intend to host more events as we get closer to being officially registered.”

Their next event will be a recreational ride in Matelot from May 21-22.

Thomas’s aspirations for his club to become competitive and hopefully play a part in producing national cyclists.

In addition to the current cyclists at the club, he wants to recruit more young riders and help them to develop and fulfill their potential. “We currently have two promising teenagers and the only way for them to get exposure and proper development is to compete and ride outside of Grande.”

He said the main challenge is financial. “Competitive cycling is very expensive in terms of bikes, training and equipment. We aim to have bikes at the club for competitive use. A competitive bike can cost up to $30,000 to $40,000.”

To help the club to grow and get financial assistance, Thomas said they are closely affiliated with another other club in Grande, whose coach used to ride nationally. The plan is to work together with them to develop a youth programme.

“They were there before us, and we want to collaborate on what’s best for training and financing. As it stands, we don’t have any sponsors. Our uniforms were bought from our own pockets, but we are currently planning how we can work on that.”

Road cycling can be a dangerous sport. When asked about the safety aspect of the club, Thomas said, “To prevent what happened to my uncle last year, we gauge the routes that we’re about to ride and determine how much coverage we need.

“We have an agreement with the eastern division of the ambulance service and we always have a vehicle following us when we ride. On almost every occasion, we have someone who is first-aid trained; emergency contacts; and we post the route before the ride so everyone knows where we are if something happens.

“We also have first-aid kits, a mobile stretcher, helmets and lights. Elbow pads and knee pads can be extra protection but not required. We own five helmets for anyone (outside the club) to come on a one-off ride, along with extra bikes for rent.”

Addressing his goals for the club, he said in the short term, they are seeking to complete the company’s registration under Legal Affairs as well as registration with the Ministry of Community Development by the end of May. He said the goal is to fall under the umbrella of the Trinidad and Tobago Cycling Federation.

His long-term goals include having developing members to compete in national and international competitions. He also wants to develop and expand the club’s management as most of the current team are new to the cycling fraternity.

“We have plans to make the club as big as possible. Look out for us!” he said.