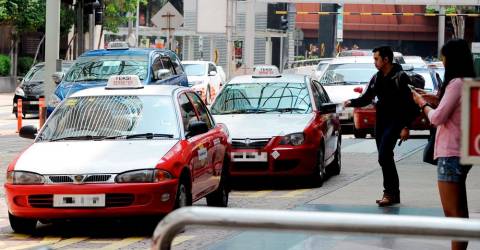 “E-hailing fares can be raised (to suit the occasion partly) because the government has not introduced controlled fares (for e-hailing services), as it has for taxis.

“It (rush-hour fare hike) stems from the way some companies take advantage of peak hours on the grounds of high demand,” he told theSun.

Kamarudin said e-hailing fares will continue to increase, and it is impossible for it not to get out of control when the number of taxis decreases.

“The taxi service is a national land transport service that is fully controlled by the government, including the fares we charge,” he said, adding that taxi services are better compared with e-hailing firms, which are not controlled.

A Grab fare from KL Sentral to Jalan Tun Razak costs RM14 during non-peak hours, for example 2.30pm. However, the fare more than doubles to RM32 during peak hours at 6.30pm for the same 10km journey.

Taxi drivers cannot estimate the fare since it is based on the meter, that continues to run even if the vehicle is stuck in traffic. However, a taxi’s starting fare is RM3, with an additional RM0.10 for each 115m it travels.

I have agreed that technological advancements, such as e-hailing services, can benefit the industry and the country.

“But when the government fails to carry out its responsibilities to properly regulate e-hailing, the service is detrimental to business as well as taxi and e-hailing drivers.”

However, he said there are certain hours and conditions that cause Grab to raise its fares.

“Grab fares have not increased permanently for all times of the day.

“The problem is that Grab fares become very expensive during peak hours, public holidays and bad weather conditions. The cost can be double or higher, which is ridiculously exorbitant.

“For instance, someone who needs to get to work by a certain time will have no choice but to travel during peak hours. Or maybe it is raining, and you feel that it is unsafe to go by bike or bus, so you decide to take a Grab car.”

He said Grab fares become exorbitant because there were fewer drivers.

“If it deems it does not have enough drivers to cover the increased number of customers, they could very well hike up prices permanently. We hope it does not happen because a lot of people depend on Grab to get around,” he said.

Mohideen said using a bus may be a cheaper option, but it is not always feasible because of the passengers’ health conditions, and the long distance between the bus stop and the destination, and the long wait for a bus ride.

“Also, the alternative public transport we have is also not always reliable or practical,” he said.

Mohideen said many other e-hailing providers, such as MyCar, Maxim and InDriver, have reasonably fares but when a customer tries to book a ride, it takes forever to get one or none at all.

He felt that Grab still has a monopoly on drivers. So even though Grab can get very expensive, it is still seen as the more reliable one compared with other e-haling providers.

Priority Communications, which handles Grab’s public relations, was asked how it sets its fares and what mechanism it uses for calculation purposes.

However, the company’s spokesman told the Sun that it is currently observing a blackout period – a policy or rule setting a time interval during which certain actions are limited or denied.

Hence, he was unable to obtain approval to comment.