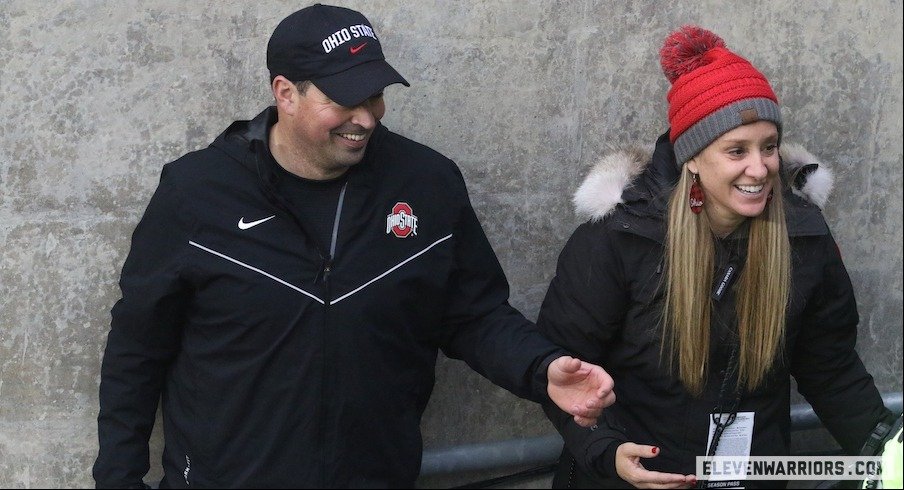 Less than 24 hours before the Ohio State football team begins its 2022 preseason camp, Ryan Day held a press conference for a different reason on Wednesday.

During a press conference at the Ohio State University Wexner Medical Center on Wednesday, Ohio State president Kristina Johnson announced that Day and his wife Nina have donated $1 million to the university to launch the Nina and Ryan Day Resilience Fund, which will benefit the medical center’s Department of Psychiatry and Behavioral Health to help fund mental health research.

This isn’t the first time the Days have launched a fund for mental health, as they also set up The Ryan and Christina Day Fund for Pediatric and Adolescent Mental Wellness at Nationwide Children’s Hospital last year. That campaign is directed toward working with children and adolescents. The Days felt it was important, however, for them to also give back directly to the Ohio State community and to fund mental health research that can benefit college students and adults.

“Supporting mental health services and ending the stigma around mental illness are causes that are very dear to our hearts,” Ryan Day said Wednesday. “Ohio State has been very good to our family, and we feel that investing in the mental wellness of the Buckeye Nation is a tremendous privilege and the right thing to do. Nina and I know from our own experiences what a great difference mental health care can make in the life of someone who is hurting.”

Day, who lost his father to suicide when he was just 9 years old, has been an advocate for mental health throughout his tenure at Ohio State. His desire for him to help people who are struggling with their mental health has been only strengthened through the experiences he’s shared with his players for him, including former Ohio State offensive lineman Harry Miller, who has opened up about his own battle with mental illness since his retirement from football in March.

“There was a lot of things that happened, some like Harry’s situation, but there was another couple that we haven’t made public where there were people that needed the resources,” Day said. “And certainly that college age, when Nina and I started talking about that, it’s a tough stretch for a lot of people. And so, they need the resources, they need the help. But then also identifying what those risk factors are, we’d really love to be a part of, to get out in front of it.”

While mental health research often focuses on how to treat people who are already dealing with mental illness, the Day Resilience Fund will be focused on funding research for identifying risk factors and creating preventive strategies to help people maintain mental wellness. Those efforts will be led by K. Luan Phan, the chair of the Department of Psychiatry and Behavioral Health, who believes mental health care needs to be focused more on how people overcome trauma rather than why people struggle with it.

“The bad news is that 10-20% of people after a trauma or after stress fall to an illness. But 70-80% actually do pretty well. What we need to figure out is, what are those people who are in the 80% doing that could help the 10-20% who are falling ill? We need to shift this idea of ​​focusing not on why people get sick, but more on why people stay well. I think that’s a major shift in our field. Because our field has always been about illness and negativity and all these things. We don’t focus on the positive elements that we need to cultivate.”

Phan said Ohio State wants to build a center for psychiatry and resilience to bring together researchers and clinicians to transform mental health care, and he said the Days’ donation is “very significant” to meeting that end. Ohio State also received a $10.15 million gift from the Schottenstein family to fund a mental health resilience program, and the Days’ donation will now allow Phan and his team to expand those efforts.

“The more people join us, the more philanthropy we have to build resources, the better we’ll be off,” Phan said. “We’re not going to get funded to do this work, because it’s not so traditional. So we have to think outside the box. And the more we have resources to fund us to do this kind of work, the better.”

“Ohio State has been very good to our family, and we feel that investing in the mental wellness of the Buckeye Nation is a tremendous privilege and the right thing to do.”– Ryan Day on creating the Nina and Ryan Day Resilience Fund

Beyond their financial support, Johnson and Wexner Medical Center chief clinical officer Andrew Thomas also lauded the Days on Wednesday for helping to break the stigmas often associated with mental health. They expressed gratitude to the Days for encouraging others throughout the Ohio State community to talk about their own mental health struggles.

“At our commencement ceremony last August, when we spoke to the 2020 graduates, Nina and Coach Day both spoke of their own mental health challenges and demonstrated that sharing your vulnerability is a powerful thing,” Johnson said. “It showed our Buckeyes and their families that it’s okay to speak up, that our leaders can share their personal thoughts, and we can too.”

“There are resources and there’s help out there,” Ryan Day said. “And it’s hard at the moment, but to recognize that if you do break your leg, there’s a solution, it’s to go in and get a cast and get it healed. When you have a mental affliction, it’s similar. It doesn’t seem similar, but it is. There’s a solution. There’s treatment. There’s different avenues that we can take to help treat those types of things. So I just think that approach is hopeful and not where you think there’s no answers. I think that’s really, really important. There are resources, and that’s what we’re working on.”

Ryan and Nina Day share a message for people who might be struggling with their mental health. pic.twitter.com/x3q0NvGqVl