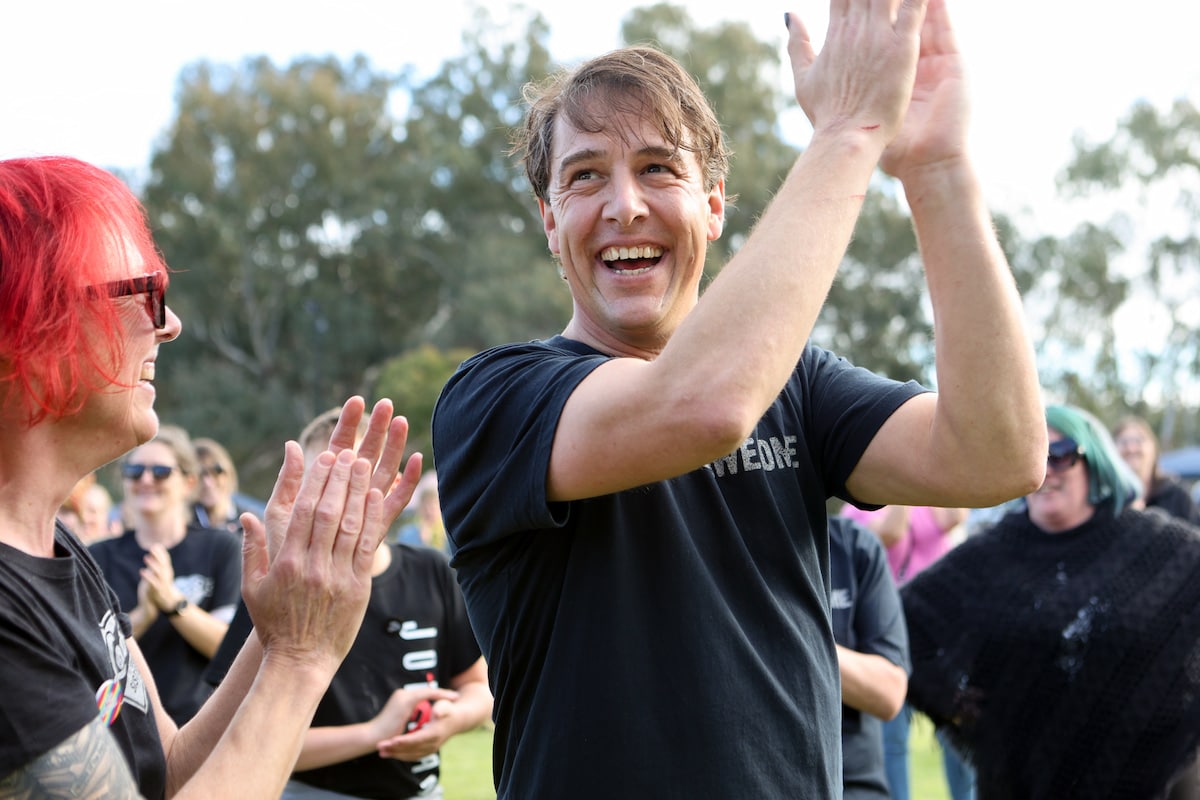 Last time we saw Gold Logie winner Samuel Johnson, he was standing on a giant sparkly love heart made from $2.5 million worth of 5 cent coins, alongside an even greater treasure, his sister Connie.

Ten thousand supporters of Connie’s brave and public battle with breast cancer gathered at the Lyneham Netball Courts to set this world record in just 24 hours and raise funds for cancer research.

Five years since Connie’s death, Samuel is coming back to Canberra this September.

In the lead up to his arrival, Samuel announced his search for like-minded people to stand alongside Love Your Sister as the charity strives to vanquish cancer for good.

“It’s great to be coming back to Connie’s hometown,” he told CW. “Last time we had a fundraiser in Canberra, it went berserk. Now that my sister’s gone, I’m terrified that no one will show up.”

After Connie’s diagnosis, Sam quit acting to start raising as much as he could to fund a cure.

“I don’t just want to do every family struggling with cancer proud, I want to do her proud too.”

Deadset on continuing momentum, Samuel is “going great guns” in his long-awaited return to the ACT.

On Friday 9 September, he will host An Evening with Samuel Johnson at the Eastlake Gungahlin footy club. “Coarse language is guaranteed.

“Thankfully, there’s no singing or dancing, but it will be an hour of filthy showbiz yarns, including an epic quest for a dead poet, never-before-heard stories, and such about the most annoying sister in the world.”

Canberrans can expect a crassly fun hour, with a touch of earnestness.

On Sunday 11 September, from 10am to 3pm, he is returning to the Lyneham Netball Courts to put on a family fun day lollapalooza, which Samuel assures will be the highlight for him this trip.

“It’s a gold coin donation to get in, and we have a ton of events to put a smile on your dial. There will be live music, magic, face painting, snow play, two jumping castles… it just goes on and on.”

The highlight of the humdinger will be the treasure hunt Sam himself orchestrates.

“I go the day before to hide the treasure, and I end up having more fun than the kids.

“In Aubrey, we lost three kids. I’m hoping Canberrans can do a bit better and lose four or five.”

Before he gets to town, Samuel is on the lookout for local businesses to support the Family Fun Day by becoming Sponsors, who will fly their flags alongside Love Your Sister’s in solidarity.

Since its inception in 2012, “Australia’s hardest-working cancer-vanquishing charity” has raised over $15 million for medical research.

While Sam guarantees fun during his visit, his mission remains at the forefront, to tell the country about precision medicine.

“Awareness is improving, but we’re nowhere near where we need to be,” said Sam.

“If cancer enters your orbit, please urge that person to talk to their oncologist about precision medicine. If they can do that, they may get the right treatment in time.

“My sister went through three rounds of treatment before she found the right drug, and by then it was too late. By eliminating false lines of treatment, we can save loved ones and heaps of cash on medicines that don’t work,” said Sam.

“Early detection is the best prevention, so feel your boobs and touch your nuts.

“But beyond that, we want precision medicine for everyone, regardless of location, income, or status. I want it rolled out yesterday.”

He also reminds Canberrans that Love Your Sister is still proudly “no skimming, no bullsh*t”.

“100 per cent of what we raise is spent on scientific research only. We don’t mess with your funds.”

Samuel said that if there was one message Connie would want done up in lights this time around, it would be to stay vigilant.

“80 per cent of all cancers reoccur. Connie knew something was wrong, but she delayed seeing it – and she paid the ultimate price. Stay vigilant.”

To learn more or get in touch to be a sponsor, visit loveyoursister.org

Canberra Weekly would love to hear from you about a story idea in the Canberra and surrounding region. Click here to submit a news tip.