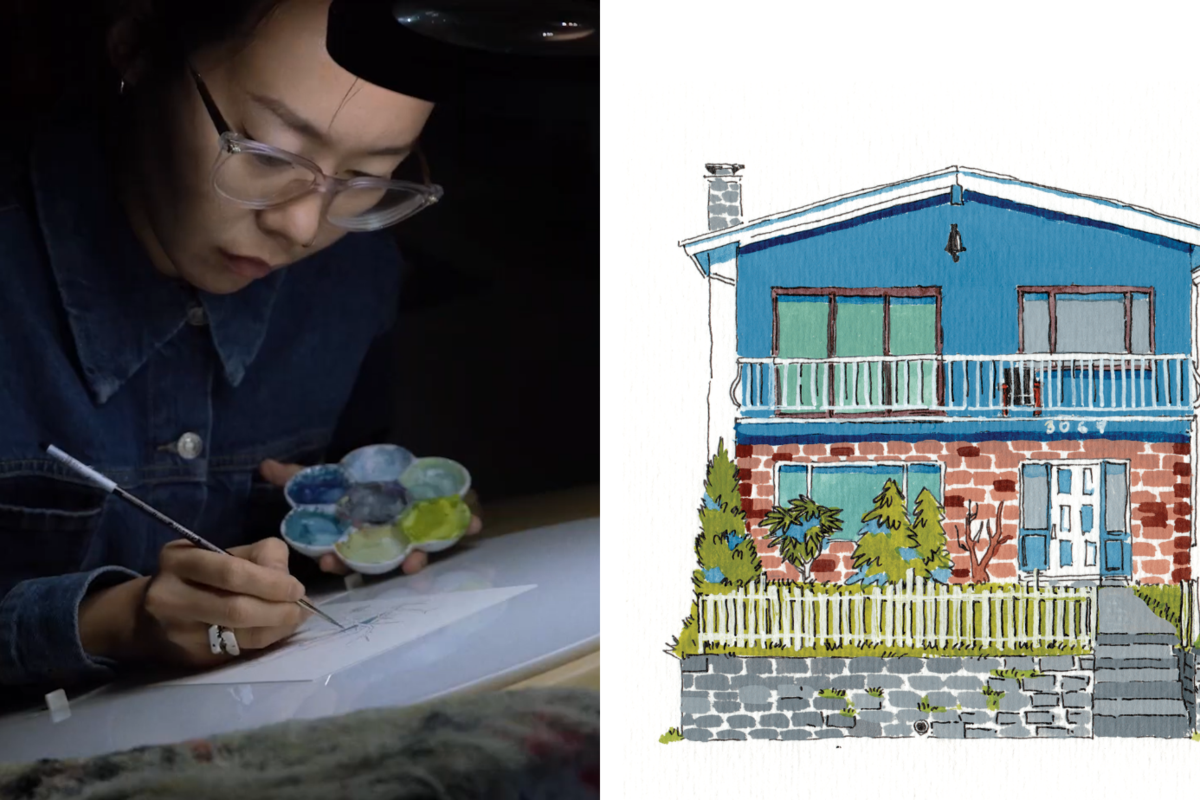 Vancouver has quite a few famous or recognizable buildings, like the Hotel Vancouver, Science World, Canada Place, and the Marine Building.

This book has none of them.

No Place Like Home: Houses of Metro Vancouver is the work of Kerel Alaas.

Alaas wanted to be an architect growing up in Yakutsk, a city in Russia’s Republic of Sakha, but decided it would be a difficult path. Instead, she decided to follow her artistic nature, attending Emily Carr University after her family moved to Metro Vancouver, graduating as a 2D animator.

However, her interest in architecture didn’t wain. On trips into Emily Carr, she’d sketch buildings along the way.

The idea of ​​turning her work into a book came to her a few years ago when she spotted Mateusz Urbanowicz’s Tokyo Storefronts. The beautifully illustrated book captured the street-level architecture of the Japanese Capital.

“When I saw it I was like ‘what a great idea, why not make a similar book about architecture in Vancouver, since Vancouver is such a beautiful place,'” she says.

“He uses watercolour: I was doing black ink sketches, never colour,” she explains. “I was so impressed and wanted to do color as well.”

After spending so much time sketching structures for herself, she felt confident she could pull off a book.

As an animator Alaas was always working on a screen and missed her personal sketch time, working with physical things. That’s when she began sketching houses.

She would go out into Metro Vancouver, often traveling via transit from her home in Coquitlam to other cities. She’d walk through residential streets, racking up 10 or 15 km as she went, taking photos of the homes that intrigued her.

“I walked a lot. I like walking, so I didn’t mind it at all,” she says. “It was a lot of fun because this way you learn a lot and find interesting places that nobody has heard of.”

There were visits to a couple famous homes, like the Hobbit House, but she focused on the unsung heroes of the real estate world.

Then she went home, picked the ones she wanted to paint for the book and got to work sketching. To color the black ink lines she used gouache paint.

In total, she painted more than 120 houses, but the book only includes 85 due to budget constraints (she self-published).

“I wanted to apply for a grant or get some support but didn’t get it,” she says. “The book was considered a bit too experimental because no one has published a book like that before.”

It’s not a history book, a photo book, or a book of a famous place, so she was told it wasn’t worth the risk.

“I really believed in this project,” she says. “I saved up some money and printed it myself.”

In Alaas’s case, an additional barrier presented itself when she fell ill in 2019, a year after starting the book. Ella’s right side of her body felt paralyzed and she could walk or talk. After a long recovery, she’s able to speak and move about, but the unidentified issue still means she can get tired quickly and needs to take breaks.

“I had to learn how to talk and walk and do everything,” she says. “Painting little houses wasn’t my thing anymore. It took me a year to get back to a functional condition.”

The book was a big part of her recovery, actually.

“It’s a bit challenging for sure, but I’m trying to do my best and live my life and do what I like,” Alaas says. “That’s why this project was so special for me, it was keeping me afloat.”

After the long delay, her book finally went on sale earlier this week.

Most people would have chosen to paint the most famous places in Vancouver, and at first, Alaas was in that camp.

“At the beginning, I wanted to make a book about grand structures, the big buildings of Metro Vancouver,” she says. “And then I realized I wasn’t really into that much.”

As someone living and working outside the downtown core, she realized most of the people who live in the metro area rarely see the big, iconic buildings. To many, she says they don’t carry much sentimental meaning. However, the small houses seen in every neighborhood are much more relevant.

“The things I usually see are the residential houses with the trees and little gardens,” she says. “I realized I really loved this.”

When she talked to her friends, she heard more of the same.

Homes are an intimate reflection of the people who live in them, she adds, while a grand building like the downtown library is about city prestige, but says nothing about the people.

“They represent Vancouver better than big structures,” she says. “When I’m traveling I always go to residential areas, wherever I go, just to see how people live, what they value, and what they want in their lives.”

She also hopes to preserve the heritage and memories the houses represent. All of the houses in her book by her existed at one point, but not all exist now.

“Metro Vancouver is developing fast and they’re building high rises. The little houses with gardens are disappearing,” she says. “There used to be a lot of rows of residential houses and instead we have these high-rise buildings (in her neighborhood de ella).”

Another more practical reason is drawing the massive buildings is a huge project, with tons of detail in each building.

While the first book just went on sale, she’s already looking to the future and more editions. This one was somewhat limited by her reliance on the SkyTrain and she missed out on places like Delta, Langley and Abbotsford.

The current edition can be bought on her Etsy store. She also has a website with more information about the book.