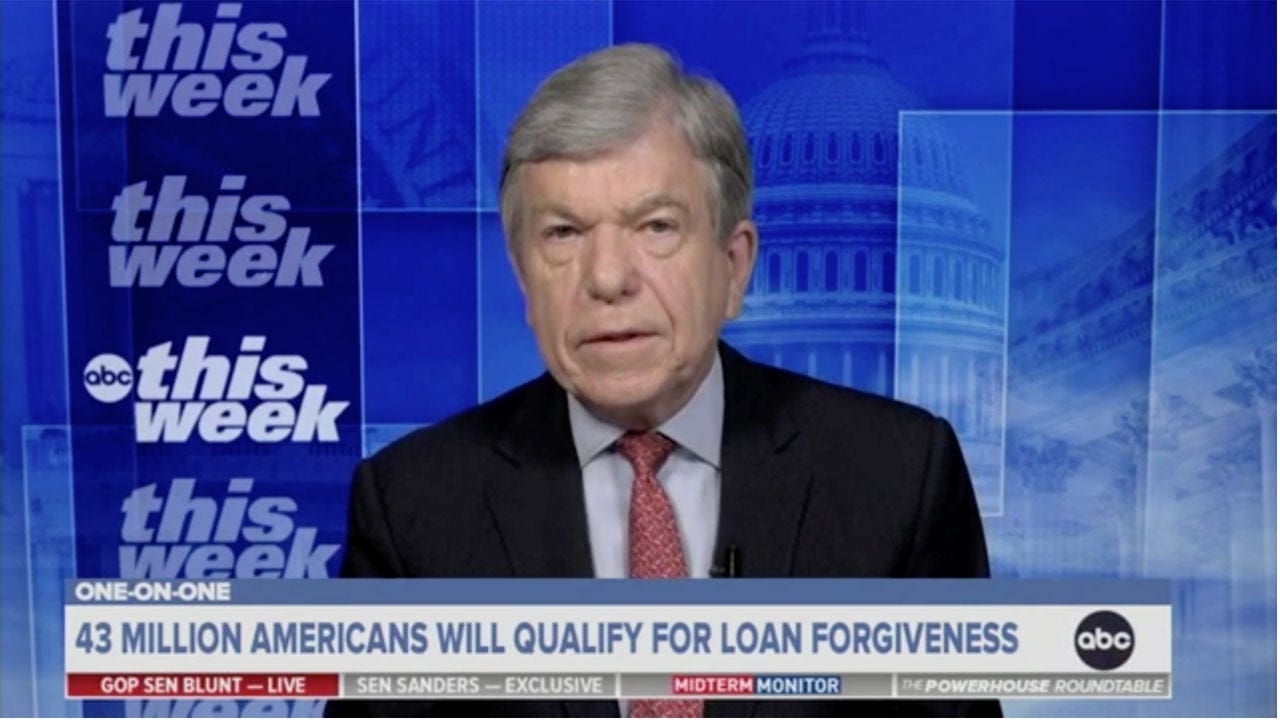 Stephanopoulos, while asking Blunt about Biden’s decision to forgive $10,000 in student loan debt for borrowers making less than $125,000 a year, said that “most economists who looked at it said it’s not going to increase inflation.”

“Well, if that’s what they’re thinking, most economists are wrong. You can’t forgive that much debt and assume people won’t spend the money for other things,” Blunt responded. “It’s certainly going to take about $24 billion that should have been coming in the federal government every year in payments and make that available for more spending.”

I added that Biden had said it was going to grow the economy.

The president said Wednesday that his decision to resume student loan payments in January 2023 would have a “meaningful effect” on inflation.

Blunt added that he was a big supporter of Pell Grants.

“Pell Grant recipients are going to be treated differently in this way than others, but there’s a way to do this that’s fair to people who have a challenge going to college and doesn’t wind up forgiving debt of people who, George, you could have a joint filer, a joint filing where one of the people’s currently not working and the other one makes $250,000 and they get $10 or $20,000 forgiven by the federal government. That just is wrong,” Blunt continued.

US President Joe Biden speaks during a rally hosted by the Democratic National Committee (DNC) at Richard Montgomery High School on August 25, 2022, in Rockville, Maryland.
(Photo by Drew Angerer/Getty Images)

“The administration had been very hesitant to do this and here they are doing it right before the election and I think people know they got their debt forgiven. Other people won’t know the impact that has on them or their taxes between now and election day,” Blunt said.

Biden announced his plan for student loan debt on Wednesday. In addition to forgiving $10,000 in loan debt for certain borrowers, he is also canceling up to $20,000 for Pell Grant recipients.

Some Democrats, including Rep. Tim Ryan, the Ohio Democratic Senate nominee, have come out against the president’s plan.

“As someone who’s paying off my own family’s student loans, I know the costs of higher education are too high,” Ryan said. “And while there’s no doubt that a college education should be about opening opportunities, waiving debt for those already on a trajectory to financial security sends the wrong message to the millions of Ohioans without a degree working just as hard to make ends meet.”

Hanna Panreck is an associate editor at Fox News.