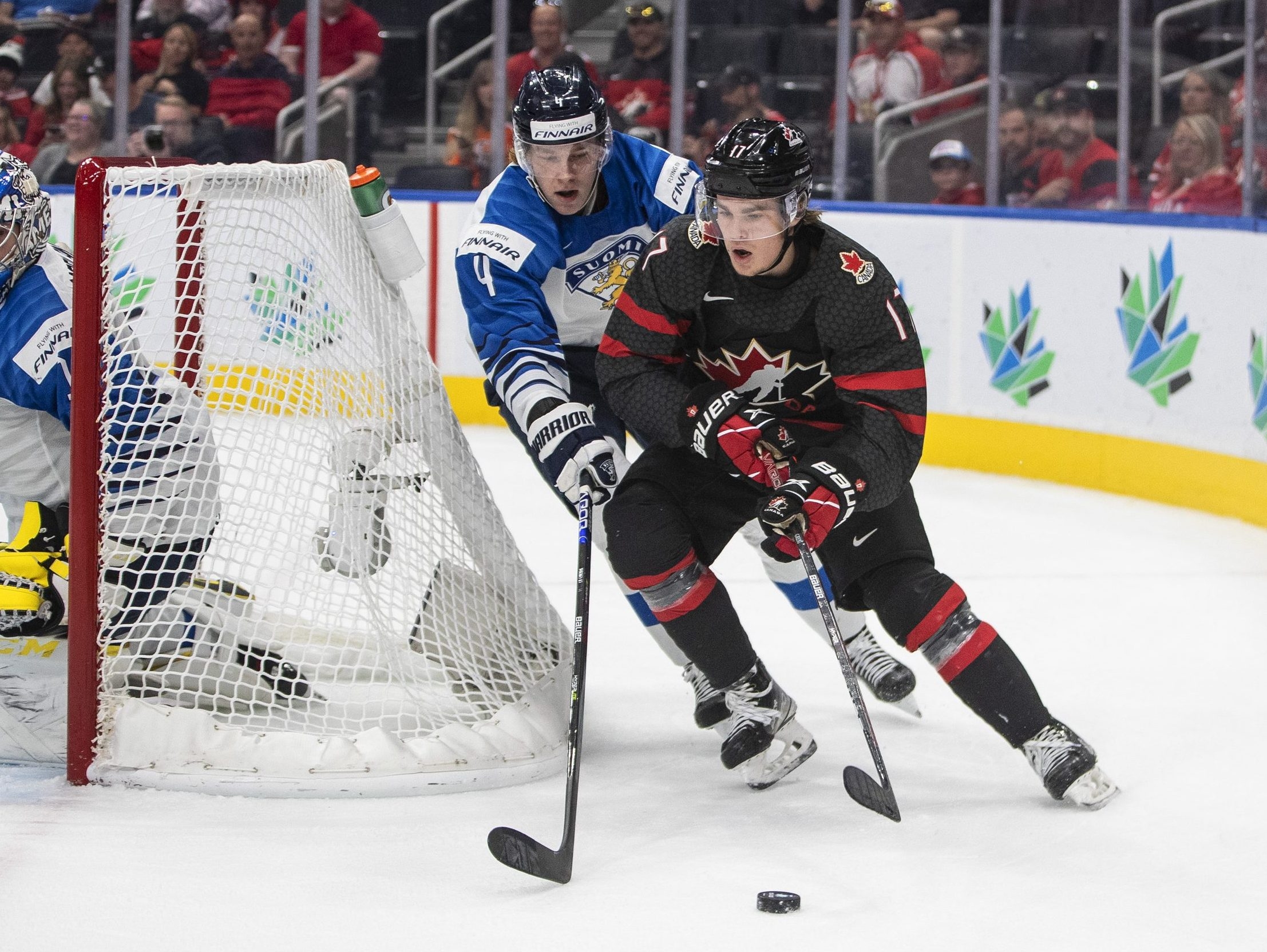 Canada is two wins away from the 2022 world junior championship title, but will likely have to earn them without center Ridly Greig.

The Ottawa Senators first-round prospect appeared to sustain a shoulder injury in the 6-3 quarterfinal win against Switzerland at Rogers Place on Wednesday.

Greig left the game favoring his left shoulder, after taking a hit along the boards from Swiss defenseman Vincent Despont late in the first period.

Greig did not take participate in practice on Thursday, and Canada head coach Dave Cameron was coy regarding the forward’s status for the semifinal against Czechia at Rogers Place on Friday.

“I don’t have anything other than the fact he’s not here,” Cameron said. “Obviously, he’s being looked at but nobody has told me anything. I’ll wait until I know and then I’ll make my decision (on the lineup).”

Greig, 20, had three goals and six points in five games with Canada at the tournament. He was centering the third line between Joshua Roy and William Dufour.

“He’s probably been our most consistent player right from the start of the tournament on,” Cameron said. “He’s played in all situations.”

Greig was selected by the Senators 28th overall in the 2020 NHL draft. He had 26 goals and 63 points in 39 games with the Brandon Wheat Kings last season and finished the year with the Senators’ AHL affiliate in Belleville. He is scheduled to attend Senators training camp in September with a chance at cracking the young roster.

“It didn’t look that great, I saw it right away,” Canada captain Mason McTavish said of the play when Greig got hurt. “It sucks for him. I have given up so much for this team. I’m not sure if he’s in or out still, but it sucks. You hate seeing that.”

Greig’s injury accentuates the risks associated with playing the world juniors in August prior to NHL training camps.

Several players who were on the Canadian roster in December before the tournament was canceled due to a COVID-19 outbreak, decided to forego the rescheduled tournament in the summer as to not disrupt preparations for the upcoming season.

“I’m not sure what his status is right now, but hopefully, he can be in the lineup, he’s a big key for us,” said Canada forward Tyson Foerster. “But if he’s not, we have other guys that can hopefully step in and fill his role.”

Forward Riley Kidney, 19, a second-round pick of the Montreal Canadiens last year, will slot into the lineup in Greig’s place.

Kidney had 30 goals and 100 points for the Acadie-Bathurst Titan in the QMJHL. He has dressed in just one game for Canada so far at the tournament, but Cameron is confident the Enfield, NS, product will be able to handle the pressure of a semifinal.

“Like I tell the players, they didn’t win a trip here; they didn’t come to Edmonton because we drew names out of a hat,” Cameron said. “They’re here because they’re real good players, and he falls in that category that until you put a guy in a situation, you’re not sure what he’s going to do, so it’s an opportunity.”

Canada has cruised through the tournament so far and is facing an opponent in Czechia that it has already beaten — 5-1 in the preliminary round.

Czechia finished fourth in Group A, but pulled off a massive upset against the United States in their quarterfinal late Wednesday night with a 4-2 win.

Prior to beating the United States, Czechia had lost its final preliminary game to Latvia, which snapped an 0-27 skid in the group stages with the victory.

“Just seeing how Czechia came back after giving up that first goal; they scored three and then they shut things down,” Foerster said. “That was a crazy game and I am looking forward to the semis.

“The key in every game is not to get behind, they’re a team that can really shut it down defensively if they get the lead. We really have to keep the pressure on them.”

The Canadians have yet to trail in the tournament and have outscored opponents 33-10 in their first five games. Admittedly, they were sloppy in the win against Switzerland and are looking to clean things up for the game against Czechia.

Dylan Garland will make his fourth consecutive start in goal for Canada.

McTavish currently leads the tournament in scoring with seven goals and 14 points.
“They (Czechia) are a great team, they work really hard, they clog the middle,” McTavish said. “It’s tough to get to the inside, to the hard areas to score. We’re going to have to focus on doing that.”

If Canada is able to get past Czechia again, it would face either Sweden or Finland in the final. The two Scandinavian rivals face each other in the second semifinal at Rogers Place.

“We know the Czechs are a good team, they played really well to beat the US,” Canada forward Kent Johnson said.

“There are a few things that we can take from playing them the first time, but mostly it’s a complete reset. I know nobody is taking anybody else lightly in the quarters or the semis, because we all know anything can happen in one game.”

Sign up to receive daily headline news from the Edmonton SUN, a division of Postmedia Network Inc.

The next issue of Edmonton Sun Headline News will soon be in your inbox.