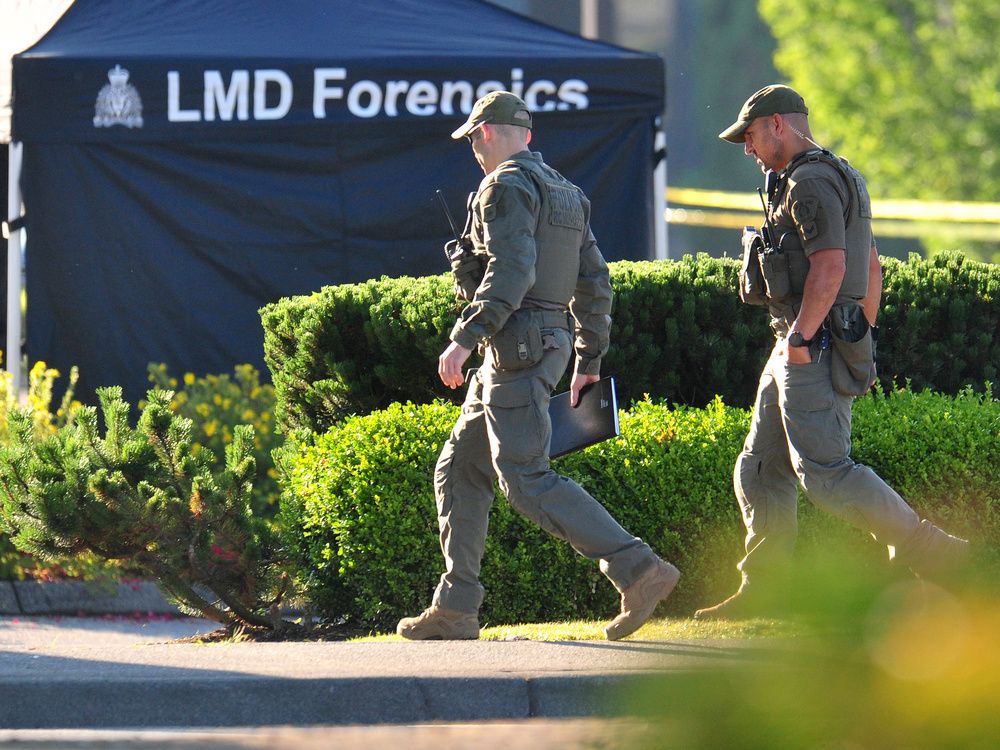 One man is in custody after an early Monday morning shooting spree in Langley.

RCMP said officers responded to several reports of shots fired with multiple victims at two different spots in the City of Langley and in two in the Township of Langley.

It is not clear whether the victims were injured or have died from the shootings.

A forensics tent could be seen at the Langley bus loop located at Logan Avenue and Glover Road near the MIssion Thrift Store.

One man, who identified as homeless, said he rushed to Langley bus loop after friends told him another homeless man had been shot in the area. “I saw ambulance try to revive the guy,” he said.

The man asked his name be withheld fearing retaliation from the shooter. “It’s so sad. I hope they are able to identify who this man is and tell his family about him.”

On Monday morning, a white car riddled with bullet holes could be seen in a strip mall parking lot near 200 Street and the Langley Bypass. A truck with a smashed-out window is also in the lot, along with a second forensics tent.

Nearby, a pair of shoes and a backpack could be seen strewn across the sidewalk along 200 Street.

A third area outside Cascades Casino near Fraser Highway and 204 Street, not far from the Langley bus loop, has also been cordoned off. Behind the police tape, a shopping cart containing what appears to be personal belongings stood underneath a tree.

By 8 am a small group of people had gathered on cement benches outside the casino, a few hundred meters away from the cordoned-off site.

One of them, a middle-aged woman who identified herself to Postmedia as homeless, said that from that vantage point, she heard the screams of a woman earlier that morning, followed by the pop of gunshots.

“She looked like she had been sleeping,” the woman said.

Police said the case remains an active investigation and asked the public to avoid: 200 Street and Langley Bypass; the Langley bus loop; and the parking lot of Cascades Casino located at Fraser Highway and 204 Street.

There is a heavy police presence in these areas.

At Willowbrook Shopping Center in the Langley Township, a small section including the front entrance of T&T Supermarket and a TransLink bus stop was also cordoned off by police.

The public was alerted to the unfolding incident via an emergency alert sent out to mobile phones across the Lower Mainland.

The alert, sent out at around 6:25 am, was issued out of an abundance of caution, said police. It warned of multiple shootings, including one incident that involved “transient victims” in the Township of Langley.

The alert included a description of a man: Caucasian with dark hair, wearing brown coveralls, and a blue and green camo T-shirt. The man is also associated with a white car. “Police have interaction with (one) suspect,” said the alert. “Unknown if others involved at this time.”

About an hour after the alert was issued, a second notification was sent out, saying the suspect “is no longer a threat.”

Jess Lee was heading to work on the Langley Bypass when her car was blocked by a large police presence on 200th Street.

At first she assumed it was a car accident. But after seeing police charging the area with rifles in hand, she knew another event was unfolding.

“There were at least 15 police cars gathered in one area,” said Lee. “One for sure was kneeling on someone, holding them down.”

Although the second alert said police are still trying to determine whether more than one suspect was involved in the shootings, Langley RCMP said investigators believe the lone suspect is now in custody.

The Integrated Homicide Investigation Team has been called in.