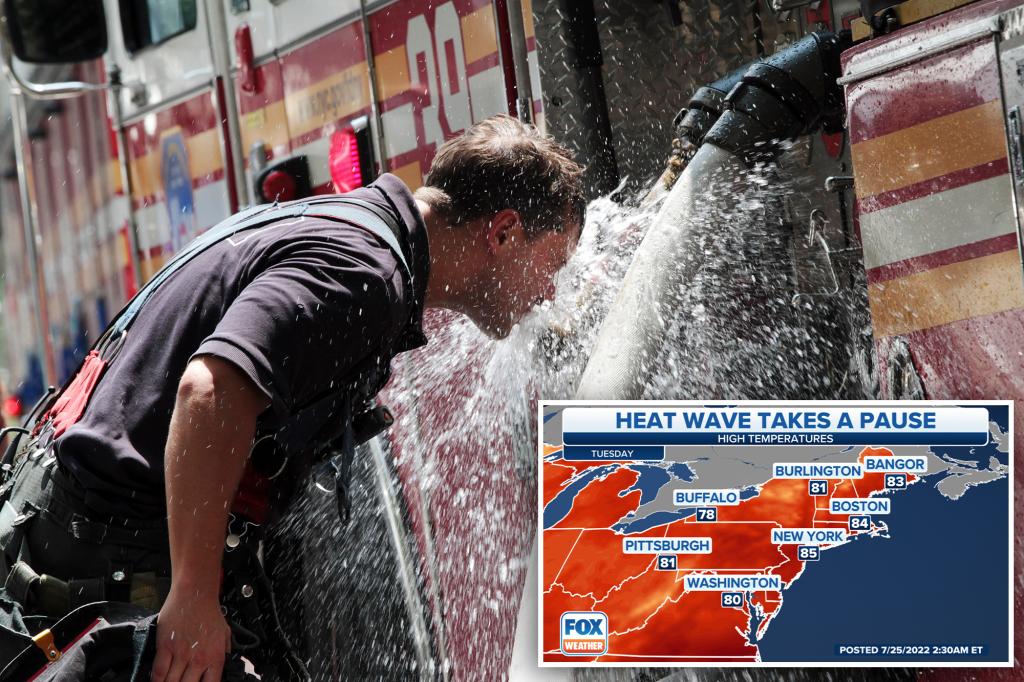 The Big Apple is dialing down the temperature.

Severe thunderstorms and powerful wind gusts will provide some relief to the tri-state region Monday after several days of sweltering heat, forecasters said.

Scattered storms packing gusts in excess of 60 mph could bring a cold front to communities Monday afternoon from Greensboro, North Carolina, all the way north to Maine throughout the densely populated I-95 corridor, Fox Weather associate meteorologist Christopher Tate told The Post.

“As this cold front pushes east, the threat for storms is, of course, shifting east as well,” Tate said. “We’re really looking at I-95 north of DC as the bull’s eye.”

Though Monday’s high in the Big Apple will reach 91 degrees, marking the seventh consecutive day of 90-plus temps, the humidity is expected to drop after the storm.

As drier air moves into the area Tuesday, New York will see an expected high of 85 degrees, according to Fox Weather.

Despite offering respite from the heat, Monday’s storm brings concerns about extreme wind, which carries a low-end risk for tornadoes, primarily north of Philadelphia, including the tri-state area of ​​New York, Connecticut and New Jersey.

“The ingredients are there, if you will,” Tate said of the potential risk of a twister touching down, including in New York City. “I’d be thoroughly surprised if one touches down near the city, but I don’t want to discount the possibility.”

All told, more than 50 million people along the East Coast were at risk of damaging winds on Monday, Fox Weather reported.

The concerning patch of storms was pushing through central Pennsylvania early Monday and is expected to reach the tri-state area later in the afternoon, Tate said.

“This is something folks are going to want to keep their eyes on,” he said. “You’ll want to head indoors and stay away from windows. The kinds of winds we’re expecting today, you could have debris falling from construction sites or downed trees in the city.”

Tate said he wouldn’t be “terribly surprised” to see a significant impact in New York City and the surrounding region.

Excessive heat warnings and heat advisories were in place through Monday afternoon from Maryland in the south to Boston up north.

At least two heat-related deaths have been reported during the Northeast’s ongoing heat wave, including an unidentified victim in New York who succumbed to heat exposure, the city medical examiner’s office said Saturday.

The victim also suffered from heart disease and pulmonary emphysema, according to the medical examiner.

More than 500 cooling centers throughout New York will remain open on Monday, the city Office of Emergency Management said.