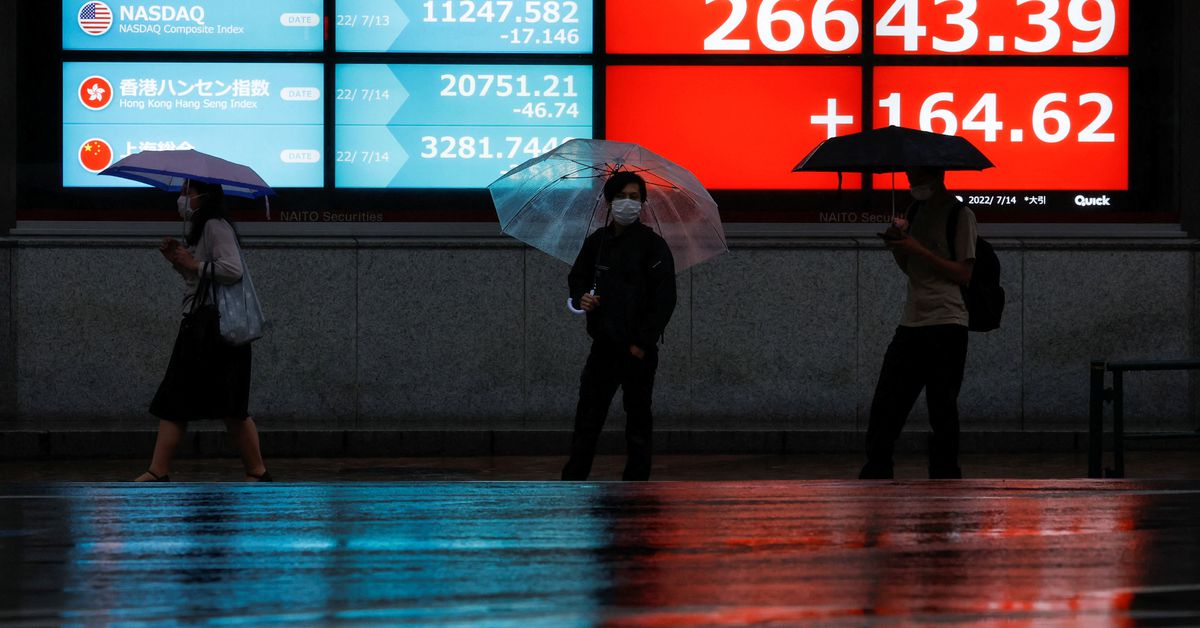 SINGAPORE, July 29 (Reuters) – Asian stocks took their cue on Friday from a late rally on Wall Street, as markets focused on a possible slowdown in the pace of rate hikes rather than a US recession after data showed its economy shrinking for a second straight quarter.

Economists are debating whether the world’s biggest economy is already in or on the verge of a recession, as it battles its highest inflation in four decades and gross domestic product shrinks – at a 0.9% annualized rate last quarter, after a 1.6% contraction in the quarter before that. read more

The Federal Reserve delivered another aggressive interest rate hike of 75 basis points this week, its third this year.

Meanwhile, China, still in the throes of COVID-19 outbreaks and lockdowns, did not mention its full-year GDP growth target after a high-level Communist Party meeting and said instead it will try hard to achieve the best possible results for the economy this year. read more

US equities, however, rallied this week as comments by Federal Reserve Chair Jerome Powell led to speculation that rate hikes would begin to slow and eventually turn to rate cuts in 2023. Shares of Amazon (AMZN.O) and Apple (AAPL.O) shot up 12% and 3% each after hours after the tech giants reported earnings that beat expectations.

But analysts warned the rally could be short-lived.

“Financial markets have taken the combination of the … (Fed) announcement and … the negative US GDP print as confirmation that policymakers will ease off their aggressive monetary tightening cycle before too long. Our sense, however, is that such hopes are premature and that some of this year’s dominant trends, notably the rise of the US dollar, will reassert themselves before too long,” Capital Economics said in a note.

US Treasuries slipped on the weak economic data, with the yield on benchmark 10-year Treasury notes retreating to 2.6759%. The two-year note’s yield, which typically moves in step with interest-rate expectations, was at 2.8703%.

“There’s this see-saw at the moment with inflation and growth concerns,” said Tom Nash, fixed income portfolio manager at UBS Asset Management in Sydney, with surprisingly soft US growth figures putting the focus on the latter.

To read Reuters Markets and Finance news, click on https://www.reuters.com/finance/marketsFor the state of play of Asian stock markets please click on: