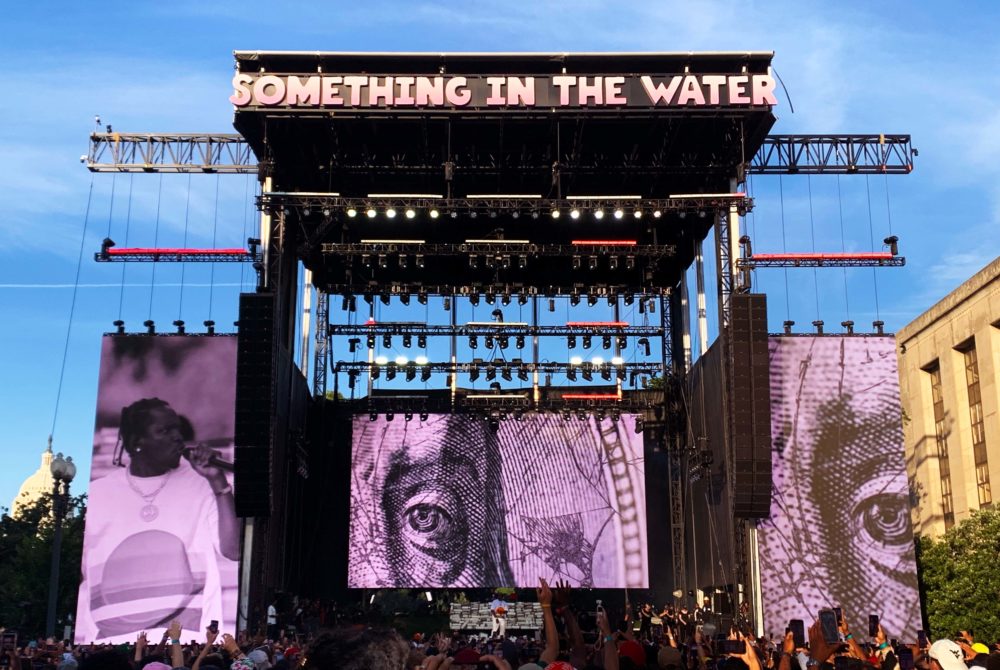 Something in the Water delivered a series of show-stopping performances that rocked the District and united generations of hip-hop, rap, alternative and R&B legends in a celebration of DMV culture and community last weekend.

Tens of thousands of people streamed across Independence Avenue at the event’s DC debut with more than 60 musicians headlined by stars like Post Malone, Lil Baby, 21 Savage and Pharrell Williams – who founded the festival in Virginia Beach in 2019. The three-day music fest brought a hard-hitting musical display that locals hadn’t seen since the pre-pandemic era, and with an emphasis on diversity on the nation’s capital, the festival made for the perfect tribute to the spirit of DC culture and identity during the heat of Juneteenth weekend.

Just blocks from the US Capitol, festival founder and award-winning producer Pharrell was purposeful with the weekend’s venue and diverse lineup, ensuring that music remained central to the commemoration of Juneteenth and emphasizing the cultural significance of music and art among communities of color.

I was able to make it to each day of the event, so I picked out my favorite standout performances that defined the full weekend that felt like a musical celebration of unity and love. Here are my highlights:

friday
Festival go-ers arrived early on Friday to snag a front-row seat to Lucky Daye and Emotional Oranges, encompassing two of the best soul and R&B performances of the weekend.

Together they formed a unique alchemy of sound, using their signature faded base-like intro while the airy vocals of V, one of the pair of artists, complimented the thicker foundation of the sound of counterpart A. Performing songs like “Personal,” “ All That” and “West Coast Love,” they brought a fresh performance to an otherwise hot and sticky crowd.

Next, Grammy-winner Lucky Daye ascended the stage serenading the crowd with “Candy Drip,” igniting his iconic soulful voice that bounced from falsetto to deeper, smoother baritone. Lucky seemed to instantly charm listeners who quickly fell in line with the groove of his sound.

A live band, consisting of a guitarist, drummer and pianist accompanied Lucky and supported the singer’s authentic sound that seemed to flow effortlessly. As he moved between more upbeat tracks such as “NWA” to slower ends with “Love You Too Much,” his aggressively deep vocals by ella configured his sexual, yet tasteful movements on stage, taking the audience back to old-school funk sounds layered with a modern pop twist.

saturday
Lil Uzi electrified the energy of the Saturday crowd with his chaotic, yet purposeful set. Placed against a bright pink thermal screen, Uzi needed nothing more than a DJ stand and a microphone to sprint on stage and stop to greet the crowd with a wink before leading into his first set of him.

Delivering one of the most energetic performances of the weekend, Uzi seemed to never stop running, bounding and bolting back and forth up and down center stage. He performed tracks from albums like “Luv is Rage 2” and “Eternal Atake” and showcased his ability to shift between punk rock, rap and hip hop while still keeping the audience enthralled in his tracks.

Later, one of the most meaningful moments of the weekend came as Pharrell Rose from the center of the festival grounds through an ascending stage to kick off his set. The producer appeared with a black and white TV filter projected onto the screen behind him as he opened with his 2015 single, “Freedom.” As he paced back and forth, he paused between chorus lyrics to provide commentary about the “magic,” “camaderie” and “love” he hoped people would welcome from the weekend.

Pharrell shared the emotion of the moment with the crowd, saying, “It’s a different feeling singing this song in front of the Capitol” and “They didn’t think we could do it, but all I see is love.”

His opening was powerful yet humble, resembling his profound influence within the music industry. Anyone who knows anything about Pharrell recognizes his humility and his desire to give back to his own community, and this venue and performance encapsulated just that.

As someone who revolutionized the sound behind hip hop in the late 90’s through producing, song writing and singing, Pharrell paid homage to his origins, bringing the sound of The Neptunes – the production duo that gave Williams his start – back to the stage. He reunited with revered artists of the early 2000s and surprised the crowd with the long-awaited performance of Clipse and NORE before bringing out newly debuted lyricist and rapper Domani Harris.

As the main headliner, Pharrell opted for a minimalist backdrop of lights, nodding along with the beat and making his presence alone enough to command the magnitude of the stage. As one of the most successful producers in the industry, Pharrell’s performance seamlessly brought together older generations of tracks with today’s modern icons of music, demonstrating his effortless omnipresence.

sunday
While rap and hip hop artists commanded much of the event throughout the weekend, R&B singer Teyana Taylor graced the stage Sunday night, adding the festival to one of her last tour spots before she officially withdraws from the industry after 15 years of work.

Teyana followed her dancers in a fiery red costume and silhouette with no difficulty summoning the attention of everyone in her vicinity as she embodied a Beyonce-style march entering the stage. While she maintained a position front and center for the entire set, she often fell in line with her dancers performing a choreography with an intricate storyline and robotic, hip-hop movements. She danced to revenge songs like “Bare Wit Me” while engaging in slower more physical acts for “Gonna Love Me,” but the physicality did not once distract from the depth and emotional range of her sound.

The three-day festival had something for everyone. Even though the summer timing of the event made it difficult for college students to attend, the festival instead catered toward middle-aged crowds. The spectrum of genres brought in a demographic where all could find two things in common – a love for music and an appreciation for the DMV.

As crowds celebrated the chance to experience the eclectic array of music, the event marked the return of a sense of normalcy after a nearly two-year break of festivals and large gatherings grounded in music just in time to celebrate the holiday weekend.

This article appeared in the June 24, 2022 issue of the Hatchet.