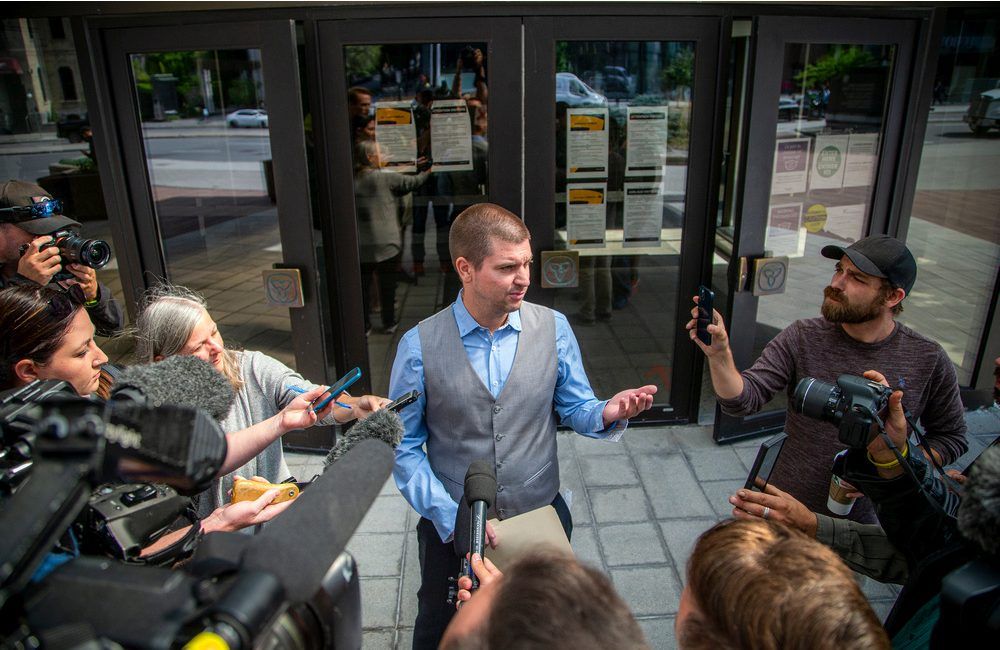 The controversial group occupying the former St. Brigid’s church in Lowertown for its “embassy” can stay there for another couple weeks after a judge agreed Friday to delay an eviction hearing.

The case filed by the landlords trying to evict The United People of Canada will be heard on Sept. 19, said Superior Court Justice Sally Gomery.

Gomery said she agreed to the request by TUPOC for a delay in order to be fair, but she was disappointed that the organization’s lawyer didn’t have the courtesy to show up in court.

William Komer, one of the three directors of the TUPOC non-profit corporation, spoke in court.

Judge Gomery also issued an order that people associated with TUPOC not impede the bailiff from posting notices or block access to the church parking lot, which is used by tenants of an adjoining office building and artists using the former church rectory.

After Komer raised the issue, Gomery added another condition that the landlord does not harass TUPOC.

Meanwhile, protesters were holding a vigil in the park across the street from the church on St. Patrick Street as part of an effort to convince TUPOC to leave. They are concerned about TUPOC supporters who are part of the “freedom convoy” movement.

There have been yelling matches and scuffles at the church between TUPOC supporters and protesters since a bailiff posted an eviction order on the building on Aug. 18.

TUPOC had made an offer to buy the church, rectory and adjoining two-storey office building on Murray Street for $5.95 million in mid June.

As far as the landlord is concerned, the sale is off because TUPOC failed to pay a $100,000 deposit for the sale by the deadline of Aug. 10, according to court documents.

The agreement to purchase also gave TUPOC the right to lease the building for $5,000 a month until the sale went through.

That agreement said the lease would be terminated if TUPOC breached any conditions of the purchase.

In court documents, the landlord said it was terminating both the purchase agreement and the lease.

Besides failing to pay the $100,000 deposit, TUPOC failed to pay $10,000 in rent, painted the church doors red in possible violation of heritage restrictions and did not provide proof of insurance as required, according to court filings by the landlord.

In an interview outside court, Komer disputed all those claims and said his group would initiate legal action against the landlord.

When repeatedly asked whether TUPOC had paid the $100,000 deposit, he responded by saying the landlord had prevented his organization from conducting a fundraising campaign to raise the money by not providing a building that was useable and safe.

Komer also said the group still plans to buy the building and that he believes the agreement of purchase is still valid.

As for the rent, Komer said TUPOC had a verbal agreement with the landlord to not pay any until mid July.

That contradicts an affidavit from landlord Patrick McDonald, who spoke briefly outside court on Friday.

McDonald said he appreciated the order from the judge that TUPOC supporters not harass tenants.

When asked whether he thought TUPOC had the $6 million to buy the building, McDonald said “when anybody makes an offer, they say they have it,” he replied. “We don’t get to look at their bank accounts.”