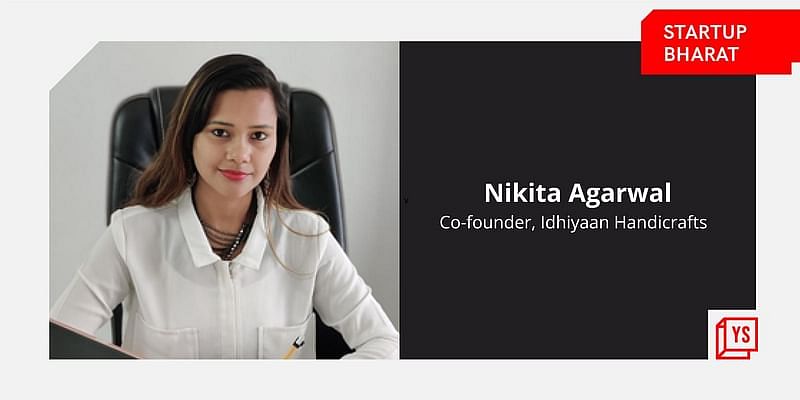 ‘Sustainability’ has become one of the most important words in the present era as the world deals with critical challenges such as climate change and pollution. According to a Mahindra Group survey, 88% of Indians now want to live more sustainably.

One of them is Siliguri-based Nikita Agarwali who calls herself “obsessed with sustainability”. However, while trying to redecorate her house with sustainable decorations, the former 29-year-old Air Asia crew member found herself in flux.

“I wanted to fill my house with interiors made from bamboo or jute,” she tells YourStory. However, finding suitable products in Siliguri’s local markets as well as online became a challenge.

She saw a business opportunity and started Idhiyaan Handicrafts in October 2019 as a personal project.

While finding vendors across Northeast India, especially Assam and Sikkim, to redecorate her house, Nikita was also on the lookout to onboard them to her new business.

“We also set up a Facebook group called ‘Handicraft Buyers and Sellers’ which gave a platform for sellers to showcase their products. This gave us access to 15,000 local artisans and vendors. We also started getting purchase requests from across the country,” says Nikita.

The co-founder also made an Instagram page and started uploading pictures of some of the products.

Idhiyaan Handicrafts started with cane baskets and jute rugs. But in the last one year, the firm has expanded into stationery and home décor categories.

It was then that her brothers – Nikhil and Suraj Agarwalwho had been struggling to keep their travel company afloat due to the disruption caused by the COVID-19 pandemic – onboarded the project and invested Rs 5 lakhs from their travel firm.

One of the biggest challenges the startup initially faced was convincing the locals in Siliguri to buy their products.

“People in our city were not able to comprehend anything about these products as there is still a lack of awareness. Many used to say ye ghaas phoos kaun khareedega (who will buy these grass and weeds)?” says Nikita, adding, “We wanted to convey that even though it is ghaas phoos, the products are extremely much better than plastics and look pretty.”

The handicraft startup, which began by selling offline through a physical store in Siliguri, tried to educate consumers by visiting their outlet. However, creating local demand became a major problem which set them back by at least a year. The trio then decided to take their products online, through their own website.

The initial set of customers were corporates and wedding planners looking for gifting options. “That’s where many of our boxes and baskets ended up being sold,” says Nikita. As the second wave started receding and the travel industry opened up, many hotels also started buying their products as interior decoration. Since then, the firm has expanded into stationery, personal care, and home decor categories.

Idhiyaan Handicrafts works with 30-40 sellers and artisans, buying products from them in bulk at wholesale prices and selling them after adding their own margin. The firm refrained from revealing their margins.

A major chunk of demand for the startup’s products comes from Mumbai, Chennai and Bengaluru, as well as from other parts of Maharashtra, Tamil Nadu and Karnataka. Idhiyaan also launched its website about two months ago, and gets 90 percent orders through their digital channels including the website, Facebook, and Instagram.

Business model and the future

On average, Idhiyaan claims to fulfill 80-90 orders every monthresulting in sales of Rs 3-4 lakhs. Their customers include corporates, individuals and resellers generating an order value between Rs 1,000 and Rs 30,000according to Suraj, who heads the sales for the firm.

In the financial year 2021-2022, the firm generated Rs 22 lakh in revenue compared with Rs 3 lakh in FY21. To be sure, Idhiyaan only functioned for six months in the first year of business. The firm aims to generate Rs 1.10 crore by the end of FY23.

Idhiyaan has also opened another store in Siliguri and plans to convert their website into a marketplace for handicrafts buyers and sellers over the next year. The firm is looking to raise external funds for their expansion plans.

India’s handicraft industry employs over seven million regional artisansaccording to India Brand Equity Foundation, with more than 67,000 export houses exporting to the US, the UK, Germany, France, Italy, and Australia, among other regions.