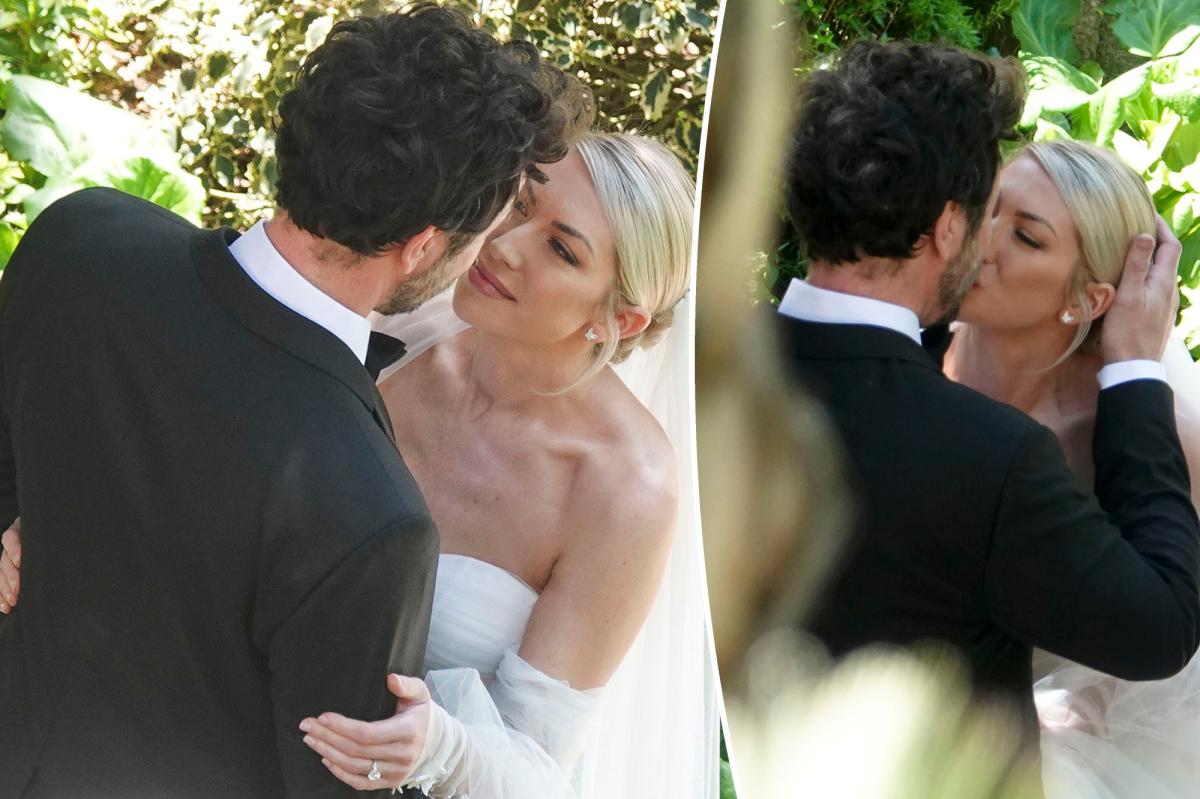 Stassi Schroeder and her husband, Beau Clark, finally had their dream wedding in Rome on Thursday after secretly marrying in September 2020.

The bride wore a white off-the-shoulder layered tulle custom Galia Lahav dress with a veil even longer than her flowing gown. She accessorized the glamorous look with Nicole Rose jewelry.

The groom opted for a classic black tux and a black Beau-tie.

Their 1-year-old daughter, Hartford, matched her mom in a tiny tulle dress with her hair pulled back with a barrette.

Schroeder and Clark had an intimate first-look rather than Clark seeing her for the first time walking down the aisle. Both reality stars got emotional upon seeing each other.

“We’re doing it! We’re doing the damn thing!” Schroeder exclaimed on her best friend Katie Maloney’s Instagram Story on her way to say “I do.”

Schroeder, 33, and Clark, 42, jetted off to Italy earlier this week with Hartford and documented their postponed pre-wedding festivities on social media, including a welcome party, rehearsal dinner and eventually the main ceremony and reception.

The “Vanderpump Rules” alums had their respective bachelorette and bachelor parties on Tuesday night, both of which consisted of wine, pasta and more wine.

Schroeder and Clark then hosted a welcome party for their destination wedding guests on Wednesday night. She went with another white off-the-shoulder Galia Lahav gown with a high slit, while he chose a classic black suit, blue shirt and yellow tie.

The lovebirds were joined by close friends and family, including their former co-stars (and recently estranged couple) Maloney and Tom Schwartz, who appeared to get along in group settings in various Instagram Stories despite their ongoing divorce.

Schroeder and Clark originally planned for an Italian wedding in the summer of 2020, but when the COVID-19 pandemic struck, they tied the knot in a private backyard ceremony instead.

“Today would’ve been our wedding day. We went and did it anyway. ❤️,” she captioned a video from their low-key nuptials. “Married sept 2020. … I am so proud to be your wife.”

The “The Good The Bad The Baby” podcast co-hosts welcomed their first child, Hartford, in January 2020.

The now-twice-married couple’s relationship played out on Seasons 7 and 8 of “Vanderpump Rules” and featured the first time Schroeder met Clark’s mom, one of their first big fights and, of course, his unconventional proposal.

Clark popped the question to Schroeder at a graveyard in July 2019 in front of Bravo cameras.

The “Off With My Head” author first announced she was in a serious relationship in February 2018 but kept her beau’s identity private at the time.

Schroeder was fired from “Pump Rules” in June 2020 for past racially insensitive actions.