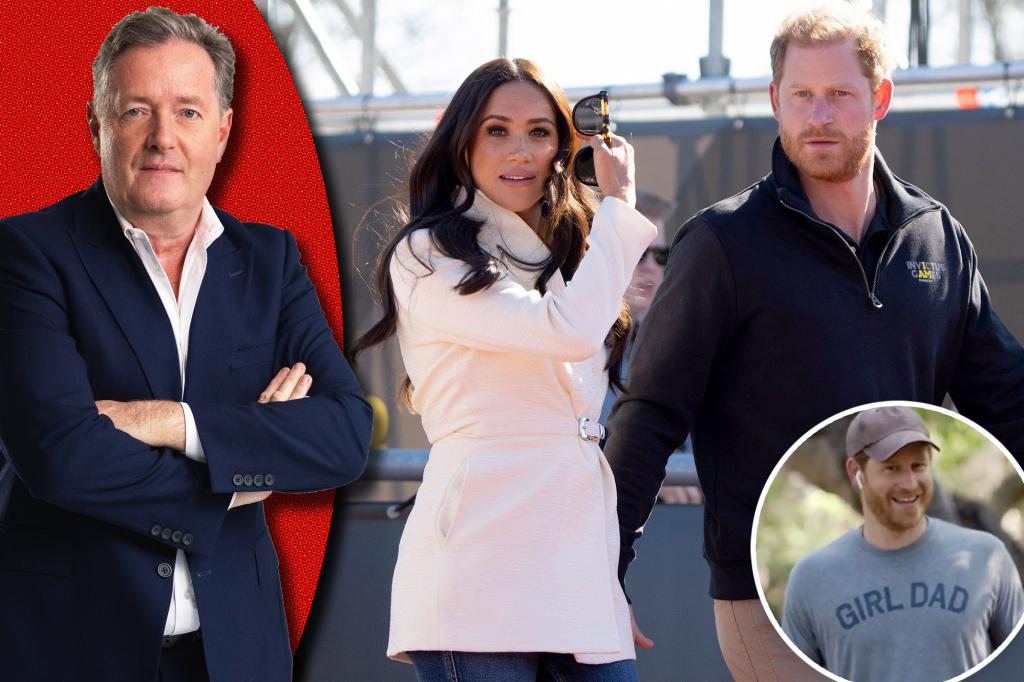 Every time I think Prince Harry couldn’t possibly make himself look more cringe-worthy, up he pops to prove me spectacularly, eye-rollingly wrong.

Sadly, the laughter was once again at him, not with him.

Wearing a ‘Girl Dad’ T-shirt, Harry is seen jogging through the woods before he’s stopped by eco-tourist ‘ratings agents’ and berated about a lollipop wrapper he supposedly dropped there during a 2018 royal tour trip with wife Meghan, but praised for turning off running tap water while he brushes his teeth.

That revelation prompted a bewildered Harry to exclaim: “How do you know that? That’s really weird.”

Because, of course, he’s such a private guy and that’s such secret personal information that could only be known if he’d turned into a Kardashian with 24/7 cameras recording his every ablution and tooth-cleansing.

Harry and Meghan have become the royal Kardashians, only a slightly trashier version if that was even possible; a pair of shameless chancers whose only thought each day is how to fleece and exploit their royal titles ever more cynically, whilst simultaneously trashing the royal family and monarchy to which they owe their status — and playing the downtrodden oppressed victims from their $11 million Californian mansion .

The hypocrisy in everything they do is breathtaking, and never better illustrated than with Harry’s latest preaching about ‘sustainable eco-travel.’

He loves self-righteously barking at us all about the urgent need to save the planet by reducing our carbon footprint, as he uses private jets like we use taxis.

Just as he and Meghan pleaded for us to think about poverty on Twitter on the very same day she was throwing a $500,000 baby shower in New York (and hopping back to London on George Clooney’s plane).

But it’s their constant bleating about privacy that most sticks in the craw given their decision to accept a reported $115 million payment from Netflix to trail around after them with cameras, capturing their most ‘private’ moments for the delectation of the public.

Ironically, that decision has now come back to bite them on their privileged backsides.

Harry and Meghan seemed to have found their perfect partners, a company that around the same time, proudly green-lit a whole comedy series about a pregnant man (it had to be a man, because otherwise Netflix would have felt compelled to call a pregnant woman a ‘birthing, chest-feeding partner.’) and would reveal in their very special brand of woke regal reading.

Only, like the nauseatingly fake societal scourge of wokeness itself, it turned out there was nothing remotely empowering or inspiring about it.

The first offering from their company Archewell Productions was an animated series “Pearl” about a young girl “heroine” who embarks “on a journey of self-discovery as she tries to overcome life’s daily challenges” and apparently based on Meghan’s own uplifting journey ( no laughing at the back, please…)

The Duchess of Sussex was ecstatic when she announced the project, gushing about her excitement to be working on such a thrilling series with ‘the powerhouse platform of Netflix.’

But that excitement turned to horror last week when Netflix suddenly pulled the plug on it after reporting a dramatic and stock-wrecking fall in subscribers.

It’s hard to believe people would want to quit a platform that was just about to offer them such empowering, inspiring and uplifting content, isn’t it?

Well, no. Not really.

The only real surprise is that Netflix ever thought we’d want to watch this kind of vomit-inducing guff from such preposterous, sanctimonious and two-faced imbeciles.

After all, Meghan and Harry’s first, and — to date — only podcast for their other big Spotify paymasters, at the end of 2020, was so simperingly bad they haven’t done another one since.

Though we’re promised a new series this summer, titled “Archetypes,” in which Meghan will “speak to experts and historians about the origin of stereotypes that hold women back.”

A woman who literally sank her grasping ruthless claws into a British prince to enrich herself beyond her wildest dreams is going to be reading us on how awful it is that women get held back in life?

It would be funny if it wasn’t so pathetic.

As was her much-hyped children’s book, The Bench, about a father’s relationship with a son, which was a massive flop and got brutally savaged by critics.

Claire Allfree, writing for the UK’s Daily Telegraph, called it ‘semi-literate’ and concluded: ”One wonders how any publisher could have thought fit to publish this grammar-defying set of badly rhyming cod homilies, let alone think any child anywhere would want to read it. But that’s planet Sussex for you, where even the business of raising a family is all about the brand.’

Start your day with all you need to know

Like the Kardashians, there’s nothing these two won’t flog, however personal, no depth of self-privacy-invasion they won’t stoop to for financial gain.

But the world’s fast waking up to the cold, hard reality that they have nothing to say that’s remotely interesting unless they’re attacking their families. And even that nasty stick is wearing off.

In a final, perhaps terminal blow to the Sussex brand, the Queen just announced she is banning them both, along with disgraced Prince Andrew, from the Buckingham Palace balcony during the Trooping of the Color ceremony at her upcoming Platinum Jubilee celebrations.

When even Her Majesty apparently feels her reputation would be tarnished just by being seen with them in public, it’s over.

On balance, she’d probably rather have the Kardashians up there waving with her.

At least they understand the meaning of family loyalty.